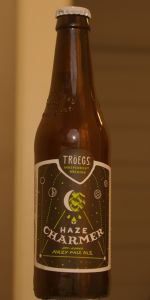 Notes: Haze Charmer emerges from a soft, swirling cloud of oats and unmalted wheat. Vigorous dry-hopping adds a second phase of haze, propping up the oils of El Dorado and Citra hops. Each sip delivers notes of juicy pineapple, fresh grapefruit and candied peach balanced by a hint of white pine and low bitterness. A soft, juicy and hazy pale ale, Haze Charmer is here to cast its spell on you. We taste: juicy pineapple, fresh grapefruit, candied peach, hint of white pine.

Pretty solid hazy pale that smells very juicy and the taste somewhat follows through, with a bit of pine in the flavor but not overly hoppy and barely bitter. Looks good in the glass with ample lacing and retention. Only significant drawback for me is the feel, its a bit watery and slightly over-carbonated. Finishes crisp and easy drinking but not enough flavor for me. Glad I tried but don't think I'll pick it up again when there are so many better options from Troegs.

Hazy but translucent yellow in appearance, with an eggshell white head. Good retention.

pours a hazy light yellow in color, thick white head. decent head retention and lacing. aroma is tropical fruit, a touch of grass and wheat. taste has a bit too much wheat in it for me. could be a little more bitter as well. thinner bodied.

Pours a hazy straw color with about a finger of white head. The nose is nicely citrusy. The citrus notes follow into the flavor profile but there's nothing terribly outstanding or bright here. The hop bitter finish is adequate.

This is nice but it just doesn't quite make it for a daily drinker or something that could serve as a PA-brewed replacement for SNPA.

This is really more for a special Untappd badge than anything else. I am drinking it out of a Bottle (gasp!) in the hopes of finding it in a CAN for a photo op. If not, I will procure another one & get a pic in place.

Their choice of style is going to hurt them since SNPA is the standard bearer, but c'est la guerre. I
Pop!ped off the cap & started a slow, gentle C-Line pour until it became obvious that clarity was out of the question. At that point, I simply tipped up the bottle & allowed it to run rather freely. This resulted in just under two fingers of dense, foamy, rocky, bone-white head with very good retention, leaving a lot of sticky lacing in its wake. Color was a deeply-hazy/lightly-cloudy Yellow-Gold (SRM = 4 - 5). Nose definitely smelled of pineapple & grapefruit, but the peach & pine remained hidden on the nose. Mouthfeel was medium. The taste initially exploded with grapefruit before cooling off with a wash of minty pine! 8=O Phew! Once I caught my breath, I got the sweeter aspects of peach & pineapple beginning to emerge. This was far closer to an AIPA, but such was the brewery's choosing of style. It was quite easy-drinking & at a relatively low 5.5% ABV, I felt more comfortable in putting it away, so to speak. Finish was semi-dry & very refreshing. Now, I CAN't wait to get ahold of a CAN or two! YMMV.

At the brewery. Smells and tastes like artificial fruit with some hop presence. Not impressed. Seems to be one of those beers riding the haze trend train to nowhere. Unless these are some experimental, fruity hops, I’d say this is not authentic and more of a gimmick. Not pleasant to drink. Like artificial mango was added, but after trying First Cut, that’s less mango-heavy and it has actual mangos in it!

Slight finger's worth of bone white head... Color is a pale hazy yellow... Nose is of mild whole cone hops and bubble gum(?)... Flavor profile is quite very light and a bit wheaty with notes of orange and peach... Light to medium bodied... Limited carbonation... A very unremarkable beer but rather quaffable... I'm generally a Troegs fanboy, but this is not a Troegs offering that I would plan to enjoy with any regularity and may actually avoid going forward...

On tap at the brewery.
This was poured into what looked like a lager glass.
The appearance had a decent look of cloudy/murky yellow juicy coloring. A two finger white foamy head slid off nicely to leave some messy lace.
The aroma had a wonderful blend of citrus rind and pith with peach flesh and skin with juicy pineapple and an ever so slight whiff of pine.
The flavor blended all of those prior mentioned aromas together nicely with some dry candied peach and pineapple blended qualities. Mellow aftertaste of that candied sweetness of the two fruits and subtle pine.
The mouthfeel was about medium bodied with a nice dryness softly touching down with an appropriate bitterness. Good carbonation with enough of a finish of dry hopping with pine and peaches.
Overall, I'd say a nicely done APA, seems like it was trying to be a New England styled one but honestly, it really didn't have it.


Haze Charmer from Tröegs Brewing Company
Beer rating: 86 out of 100 with 34 ratings