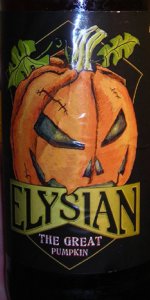 why am I drinking a pumpkin beer in April? it's covid 19 time , can't get to the micro breweries- so I am drinking my back long stash.

drink some ipas and stouts ,then grab a pumpkin! That's a flavor shock. this is one of those better pumpkins. the pumpkin and spice flavors are just enough to give you the style, but still tell it is a beer ,

First off-beer is actually 8.4% ABV as listed on 12 oz bottle vs.listed 8.1 ABV.
Tried 12 pumpkin ales this year-clearly in top 3-4. Great nose, smooth with solid finish. Not overpowering on the pumpkin and spice-well balanced with good mouth feel. Of the 4 Elysian pumpkin beers this is probably their second best.

Smells sweet and smoky with a medium level of pumpkin spice. Doesn't smash your nose in with sweetness or spice like some versions do.

Starts out mildly sweet with a good spice flavor. Moderate sweetness and spice flavors, not overdone like some. Alcohol is completely hidden. Faint hint of lemon. Only hint of its alcohol content is a warming in the stomach.

Overall a very well done Pumpkin beer. VERY easy to drink. I am giving it a 5 overall for being not overdone like so many Pumpkin Beers.

From a bottle, pours as a hazy deep copper with plentiful carbonation and a thin quickly disbursing head. Aroma is subtle but spice-like. Likewise, the taste is pumpkin-pie-forward with nutmeg, cinnamon, and clover. Sweet malt is there, but not pronounced. Overall, this is a festive beverage that I'd serve to guests (at, say, Thanksgiving.)

I have had so many sub-par pumpkin beers that I sometimes want to write-off the entire style. This one, though, is one of the few that renew my faith. From a twelve ounce brown bottle, it is a hazy orange-amber color with a puffy white head. The aroma has a subtle pumpkin spice. Nutmeg is notable, but not overpowering. The taste is semi-dry and the spice continues through the finish. Not bad at all.

Talk all the trash you want, I shamelessly love pumpkin beers. This particular Imperial Pumpkin Ale is a winner. Its smooth, a little spicy and deceptive with its ABV. Great fall (or anytime, really) beer for late nights or football Sundays.

Pours hazy orange, but no noticeable sediment settled. A couple fingers of frothy white head which takes some time to fade. Smells mostly of nutmeg and cinnamon. Definite pumpkin ale at the beginning, with the end of a drink bringing the nutmeg and cinnamon flavor more. A bit more spice-heavy than other pumpkin imperial ales, but that just makes it different. Excellent imperial pumpkin ale, would definitely buy if I find since its not common in Virginia.

Clear gold color. Thick white head that left a tiny bit of lace.
Spice aroma predominates. Some pumpkin.
The roles are reversed in the taste. Pumpkin up front with cinnamon and nutmeg in the background.
Nice to have a pumpkin beer that isn't all about the spice.

Pours a nice orange,amber color. Has around a medium body with about average carbonation
Aroma is real pumpkin, cinnamon,clove and nutmeg. There's also a nice aroma of malts
Taste doesn't stray far from aroma,the pumpkin tastes like fresh baked. The spices are very noticeable but not overdone which allowed the pumpkin to show up well
It was done well and I would try this again

Pours a clear dark orange with a bit of amber - just like a pumpkin ale should. Outstanding head volume and retention. Minimal lacing but such is expected with an imperial (8.4% ABV).

Outstanding nose of light spice (clove, cinnamon and nutmeg) with a quite distinct amount of pumpkin. The alcohol is covered. The base is slightly sweet and balanced.

Light full body that is silky smooth and has creamy aspects coupled with a bit of oily slickness. The carbonation / body balance is world class. Effervescence is moderate in the middle and slightly prickly in the finish. It is matched perfectly to support the mouthfeel.


The flavor profile is quite outstanding. The alcohol is partially uncovered during the finish and linger, thus denying the world class rating. Like the nose the base is moderately sweet and tastes bready. This foundation lays the groundwork for the spices and pumpkin to shine. Bitterness is very light. The spices come across as a blend with clove separating near the finish.

22oz bottle. Poured out a clear, orange color with golden highlights and a small, tan head of foam. It smelled of nutmeg, allspice, clove, cinnamon and pumpkin. Nice sweet pumpkin flavor with a great balance of spices.

L - Bronze, with no clarity. 1 finger of head and some minor lacing left on the glass

T - Pumpkin is subtle, but lots of spices. Cinnamon and nutmeg dominate just like the aroma. Hidden ABV. Easy to drink and enjoyable

Appearance: The body of the beer is an amber-orange color that has a light haze to it which allows letters to be seen through it with a light bit of fuzziness. The head is short and white without much retention or lacing.

Aroma: The beer has a fantastic pumpkin pie spice and it smells just like a pumpkin pie. From an aroma perspective it's perfectly balanced where none of the spices stand out over the other making it hard to even identify individual spice components. It's also a strong aroma. After a while of sitting out it starts to deliver a bit of a graham cracker scent.

Taste: There is a nice mix of what tastes like cinnamon and nutmeg with a touch of alcohol. While not quite as strong, it's a bit like a pumpkin pie spiced schnapps. This beer is definitely one that builds up layers of flavors the more it is consumed. The more you drink it the more the previous spices linger on the palate and the more it tastes like pumpkin pie.

Mouthfeel: It's a nice medium-light bodied beer with a fairly dry finish which gives it a bit of a thin taper. It has a bit of astringency but with heavily spiced beers I wouldn't consider it a negative but rather something to note.

Overall: It's a good pumpkin ale and it is definitely one of the better ones available. With spicing consistency and gourd flavor having a large impact on pumpkin ales it is impossible to predict the flavor of this beer in the future, but as of this 2017 batch I would highly recommend purchasing it. I would drink it again.

22oz bottle poured into glass.
The look is orange with a thin white head. The smell consists of pumpkin, cinnamon, and nutmeg. It tastes like it smells, but with grahm crackers. The feel is easy to drink. Overall this is a great beer.

I am gonna put this out there for anyone that has had a generous sampling of pumpkin beers that can be found throughout the world. Hands down this is the perfect pumpkin beer to me, and I am rating it a 5 on all scales.
It is bright Orange, neat little head on it, perfect carbonation, and it smells and tastes of loads of pumpkin pie without being cloying in any way. This is just amazing, as I said before I rate this against other pumpkin beers and this is the best one I have had out of maybe 20 of them

Pumpkin pie in a bottle. The best Imperial Pumpkin Ale I've had--including Pumking--and can be found for about 40% less typically. Elysian knocked the ball out of the park with this brew.

Pours a semi hazy amber orange color, frothy white head that fades semi quickly. Aroma is sweet and rich - roasted marshmallows and yam, honey sweetness and pumpkin pie meat. Flavor is literally pumpkin pie meat with a hint of crust...how did they make it taste exactly like pumpkin pie?? Sitting on the tongue the flavors come out even more. Definitely a tasty treat.

Look: Crystalline orange, small round bubbles. Head disappears relatively quickly leaving a bit floating and thin white lacing.
Smell: Like pumpkin pie. I've been on a search for this, and this is it. Strong pumpkin spice, allspice, nutmeg, clove, cinnamon. The works.
Taste: Similar to the smell but not quite as 'whole pie' ... more of the pumpkin and nutmeg, less sweet. Bitter. Minimal hop presence. Also aftertaste is bitter and a bit burnt like the top of a pie that got singed too much.
Feel: Great. Thick. Viscous. Oily. Heavy mouthfeel. Like a runny syrup. Smooth carbonation that bubbles up nicely and makes for an interesting sensation.
Overall: Would definitely get again, no doubt and would recommend again to friends who are also in search of a pumpkin pie beer.

Deep gold in color and a touch cloudy with a bit of head that settles to nothing. Very minor lacing on a swirl.

Nose is pumpkin, sweet cinnamon, and a mixture of nutmeg, clove, and allspice.

Taste follows the nose with pumpkin, cinnamon, and then a mixture of clove and allspice. Some sweetness. Some malt.

Mouthful is medium and somewhat syrupy but a touch aggressive. Carbonation is average. Finish is semi dry.

One of the best noses on a pumpkin beer I have encountered. Reminds me of Apple cider except with pumpkins. Taste is not as strong as the nose and is a bit vegetal. Mouthful could be smoother. All in all definitely above average. Try it if available.

Copper colored with a half inch of tightly woven beige head. The aroma is an amazing melange of pumpkin pie spice, nutmeg, cinnamon, and allspice. They absolutely nailed the spices in terms of the aroma. I'm tasting pumpkin pie spice, nutmeg, cinnamon, allspice, and perhaps a judicious touch of clove. The mouth is still spiced appropriately and moderately carbonated. Not too watery and not too carbonated.

Picked up a bomber at a very reasonably priced $3.99 at my local Binny's. Pours into a tulip with a light, clear orange color. About a half finger of white head that dissipates quickly. Smell is of nutmeg, clove, allspice. As it warms the clove becomes more prominent. Taste is nice and "pumpkin pie" at first. As the beer warms and as I drink it more, the dominent flavor is clove...overpoweringly so. It is almost medicinal the more I drink this. I was hoping to enjoy this more but it really has become cloying somewhat. The feel, for an almost 9% beer, is quite nice and spot on (creamy). Overall, it is a decent pumpkin beer, but the clove is all too intrusive.

10-24-16 - Bottled poured into a snifter at home. Whithead dissipates quickly. Strong pumpkin aroma. Orangish color with normal mouthfeel. Fine pumpkin ale, but was expecting more as this is labeled an Imperial Pumpkin Ale.

Pours an orange-copper color with a finger of head. The nose is straight up pumpkin butter. The flavor includes the essence of the holy gourd with gentle spices. There is no residual sweetness here but the seasonal spices come out a bit more boldly on the finish.