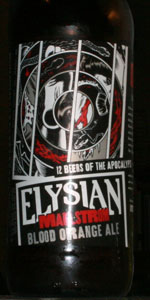 Down, down, down Maelstrom will go, pulling the hapless beer enthusiast in with a beguiling blend of blood orange, Northwest hops and sweet orange peel. Stray too close and you may not escape the currents of this tender trap. Blood orange provides tartness and the blush of a brazen sea, Citra and Amarillo hops from the Yakima Valley offer bite and aroma, and orange peel suggests a little something else on the wind.

Maelstrom is brewed with pale, Munich and Dextri-pils malts, bittered with German Northern Brewer and finished and dry-hopped with Citra and Amarillo.

Reviewed by GossageBrewery from Missouri

A - Pours a cloudy light orange with a foamy two inch cream-colored head with good retention.

Poured an orange-amber color, massively cloudy to the point of opacity, with a small white, bubbly head that sank to a thin layer and left a bit of lacing on the glass. As promised, lots of citrus in the nose, with a bit of pale malt sweetness in the background. Huge blast of orange pith in the taste, fairly juicy, but mostly bitter, distant pale malts once again pushed into the background, as the citrus was clearly in command. Light-medium body, crisp and flavorful, but very pithy...good if that's your thing, bad if it's not. I enjoyed it.

So far, this is one of the better, more approachable beer of Elysian's Apocalypse Series in my opinion. Yeah, they focused on blood orange with this one, and it seems to work out really well in an IPA setting.

Reviewed by Bookseeb from Washington

3.83/5  rDev +5.5%
look: 4.5 | smell: 4 | taste: 3.5 | feel: 4 | overall: 4
Appearance is a hazy orange supporting a creamy head that subsides, but still available leaving fair lace. Aroma has a sweetness with the orange peel almost like a creamsicle with good whif of the hops. Taste has a big citric orange sweetness countered with a balance from the big hops. Mouthfeel is medium with good carbonatrion. A very nice enjoyable stronge ale.
Nov 21, 2012
Rated: 3.75 by reviticus

Pours a cloudy pale orange color, with a modest white head. It looks a little like pineapple juice.

Smell is a decidedly citrus aroma, orange peel for sure, maybe a lemon blossom scent,

Taste is also predictably citrus., pink grapefruit and lemon, maybe a bitter orange flavor. There is a hint of grain flavor and a mild bitter finish.

Overall a nice brew. There have been some distribution problems with this 12 beers of the apocalypse series. I didn't get this one until late October, it would have been great on Labor Day weekend.

Reviewed by Mora2000 from Texas

The beer pours a slightly hazy golden orange color with a white head. The aroma is heavy on the fruit. I get a lot of orange and grapefruit notes, which I assume comes from the blood oranges. I also get a little bit of biscuit malt in the aroma.

The flavor is similar. I get some tartness and a hint of bitterness up front. Once again there is a lot of orange and grapefruit notes, as well as a hint of lemon. I get some biscuit malt and just the slightest hint of sweetness in the flavor. A very fruity, citrusy beer that goes down very easily.

The aroma was a nice blend of grains and fruit, with just a tickle of hops in the background. On the tongue, the malts were a bit more subdued than the aroma had led me to expect, the orange flavor provided a nice counter-point and the hops were nicely crisp, a bit citrusy with a hint of floral.

The body was pleasantly medium, with a dry and slightly bitter finish. Drinkability was good, although I probably wouldn't have more than one at a time,I would have it again. Overall, a nice brew that didn't really trip my personal trigger, YMMV. Worth trying if you see it.

Reviewed by Beerenauslese from California

Tastes of bready caramel malt, then a little orange flesh sweetness and then orange rind and hop bitterness. Northwest hop style, seems like some Cascade given the grapefruit in the finish. I am enjoying the fresh orange flavor in this. The orange skin oils and the grapefruit hops combine for a more complex bitterness in the finish. The bitterness keeps coming in between sips, making me desire to take another one.

Body is light despite the cloudiness and carbonation is as well though sufficient to give it a little fizziness.

Reviewed by grittybrews from Washington

Moderate carbonation and a full, smooth mouthfeel. Nice burst of orange up front followed by grapefruit, caramel, and some fairly assertive pine bitterness on the tail end.

Very nice, orange adds to the hop flavor without throwing off the balance.

Reviewed by WastingFreetime from Wisconsin

3.58/5  rDev -1.4%
look: 4 | smell: 3.5 | taste: 3.5 | feel: 4 | overall: 3.5
Pours out a clouded pumpkin orange color with a finger and a half of light beige frothy sticky head that sticks around for a few minutes and leaves behind some lovely curtains of lacing on the glass. Medium body and carbonation levels, slightly creamy in texture.

Smells like blood oranges as expected, both peel and juice with light herbal and floral hopping used as a framing aroma. Tastes at first of bitter orange peel, transitions into a herbal / dry biscuit malt combo, and finishes with a straightforward grapefruit pith flourish. Thankfully, the flavor is about 30% drier than the sweetness of the nose had led me to expect. Bitterness levels are straddling that blurry grey line in between PA and IPA territory IMHO.

Whatever enjoyment the drinker gets out of this one will primarily depend on how much they like the idea of blood oranges approached from a somewhat drier spectrum than is usually seen with the ingredient. They did a good job keeping the focus narrowed down on mostly citrus peel elements in this one, so I can't really fault it for being somewhat less complex than other IPAS. But on the other hand, even though the blood orange angle does bring something novel to the party, it's sort of a one-trick pony.

Reviewed by philbertk from Washington

Smell: sweet malty base with a citrusy bouquet. The specific fruits are rather nondescript, but the effect is pretty nice.

Taste: quite a citrusy beer indeed. The sweet malt provides a very nice backdrop to the citrusy hops and the actual orange contribution. I admit I was apprehensive going in, but they have shown restraint and the overall effect is pretty successful: this beer is orangey without being over-the-top.

Mouthfeel: medium body with a good level of carbonation and concomitant creaminess. I like it.

Overall: this is a pretty good beer; certainly, it's an interesting and rather different one. I like they way they've blended the orange with citrusy hops to make an interesting, piquant brew.