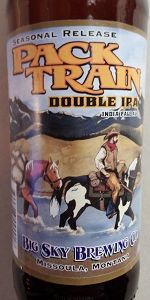 Pours a nice foggy golden color. Trace amounts of white head on the pour. The smell is loaded with orange and clementine aroma. The taste is very pine centered. Moderate carbonation leads way to a smooth feel going down and it leaves a nice after taste.

= Overall a decent DIPA. Not something I would search out but with most DIPAs. I'm satisfied.

L: It pours copper amber with a very slight haze as streams of bubbles quickly rise to the top to help sustain a 1.5" lacy, off-white foam cap with moderate retention.

T: Moderate malt flavors with a mild sweetness, citrus and tropical fruit lead the flavors with a moderate finishing bitterness. The bitterness has a citrus rind taste that balances very well with the malt sweetness. As the beer warms, mild tangerine flavors come forward.

F: The body is a little under medium, the carbonation is medium and the beer is mildly warming.

Beer poured gold with a nice white head that is leaving lacing behind.

Nose is a generous amount of citrus.

Taste is citrus, some pine, and a touch of mango that is pretty well balanced with the malt backbone.

Overall a solid brew, one that i would love to have fresher!

My neighbor shared a bottle of this with me. It poured a clear orangish with thin white head that left a spotty lace. The scent had waifs of citrus and pine. The taste was evenly balanced and enjoyable to drink. There was pine and citrus balanced by a slight malt. The Mouthfeel was medium in body with good carbonation. Overall it's a solid beer.

The aroma is some sweet malt with fruity resiny hops.

The flavor is sweet sugary caramel malt with lots of fruit and a resiny piney hop bitterness and some alcohol. The mouthfeel is medium bodied with low carbonation.

Overall, a nice DIPA. It a little sweet and rough around the edges.

a nice new one from these guys, somewhat more of a balanced big ipa, quite a bit more malty than the trends are going on these, but i like the beer a lot and think they have done a better job with this one than they have with a lot of their other hoppy beers. its got a nice malty nose, honey and caramel to it, with the hops more on the pine side of things, sappy and wintery, this smells hearty and warming. the flavor is similar, very nicely rounded, not as much malt presence as it smells like it will have, but a little sweetness through to balance out the hops, which are piney sure, but also a sort of citrusy juicy thing too, bitter enough but not gripping, and with just enough of the alcohol showing through. this is sort of like a light american barleywine, where the grain flavors this as much as the hops do, and the booze unites them. something a little different from what is in vogue in the style right now, but i like what they did with this one quite well. not something i could drink a ton of, but an awesome hop profile and a fuller body are both great here nice for the fall season.

Pours orange and shiny with a dirty white topping. Citrus and faint pine to the nose. Taste is a near perfect consolidation of juice, resin, spice and caramel sweetness. Medium in body and potent in kick but won't knock you out.

This is a majestic IPA from a brand that I've apparently been away from for way too long.

Light, golden amber in color. A faint haze, low carbonation. Almost no head, and very little lacing. The aroma is malt, tropical fruit, and a faint trace of alcohol. The flavor is pine and spice, along with some grapefruit and a light hint of alcohol heat. Not as intense as some DIPAs, but I think it's a sipper. It gets better as it warms up a bit in my opinion. Resinous mouthfeel and dry finish. A decent beer, but not one I'd go to for a regular.

Feel: Medium mouthfeel for me, carbonation is high

Overall: decent beer, would like to find it on tap somewhere.

Very nice DIPA, pick it up fresh & you will be impressed

Clear gold with two fingers of ten minute white head. Splotches of lace.
Smell is all about the hops.
Taste is resinous hops with a good amount of malt backing.
Mouthfeel is medium with good carbonation. Finish is dry and moderately bitter.
Nice DIPA that keeps the malts under control. Nice balance for the style. Well done Big Sky.

A nice slightly hazy reddish gold with a 1 finger....quickly shrinking head of foam. It leaves some lacing behind.

The smell is mostly of piney hops. Being in the lower spectrum for the style, I was hoping for some kind of sweetish malt presence but I can't seem to get any. I'm now getting a bit of grapefruit; it adds a nice touch to the hops but again, where's the malt?

Taste fits the smell to a t. Almost. I DO get a slight hint of malt sweetness but it doesn't seem consistent on every sip. There now, not there now. Currently, it's there so I'll judge the beer accordingly.

I have no qualms about the mouthfeel. Medium bodied with perfect carbonation.

Overall, it comes across, for me, as an amped up IPA without getting into serious malt territory. Maybe that's a good thing cuz the abv is not very noticeable?


Pack Train from Big Sky Brewing Company
Beer rating: 90 out of 100 with 53 ratings