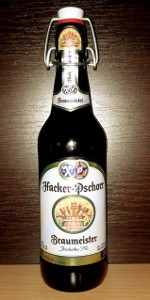 Had this one at the Lenz restaurant in Munchen, right by the Theresienwiese (or however it's spelled). Poured a nice golden color, clear, with a decent head. Gentle sweet aroma with some leafy hop-ness. This carries over to the taste. Finishes a tad dry and bitter. Pretty nice pilsner, certainly better than the most I've had over there.

Served from a Weizen glass.

Clear golden color. Large head at first but disappeared quickly and left some lace. Just a few bubbles rising. Doesn't seem to be very carbonated.
Aroma and taste are standard pilsener and quite weak. Not much to say here.
As expected, not very carbonated. Body is kind of soft and silky. Very drinkable but not very refreshing.

Overall i think it's an average beer. I had better German Pilsners.

Catch up rating. Rich and bready with a bit of floral hops on the back end. Definitely more malty than the rest of the lot from Germany, but still squarely in pils territory. Not the greatest pils ever, but one of the better ones in the area for sure.

I tried this on tap at the Kiwi. Poured a clear yellow body with a fluffy two finger white head with little retention but lots of frothy lacing. Light malt with nice grassy hops for the scent. The taste follows the nose with some biscuit and pepper, very well balanced. Medium body and very smooth with decent carbonation. Refreshing and crisp, definitely sessionable. Although this is not my favourite style, I would definitely grab this brew in a pinch (i.e. when a nice ale is not available).

Not a strong smelling as others I have tried. There is some nice grassy hops & a nice herbal aroma too it. There is some background grain notes although nothing off putting.

Good mix of corn, grain & grassy hops giving it a sweet taste overall that is very appealing & goes down great. Simple but effective.

A very smooth beer with good carbonation & a nice crisp, refreshing finish. A very nice beer on the palate from this light to medium bodied beer.

A wonderful example of a good, very well balanced pilsener. The aroma was a little light on the nose but other than that this one is an almost perfect example of the style that is very drinkable & would be a great session beer.

Had this on tap at the Donisl. Draft pilsner from a Munich brewer? That's not too common!
Served in a 1/2L Donisl glass. Rich golden color...darker than pretty much all of the other pilsners I've recently encountered.
Rich and bready with a hit of floral (maybe even a bit herbal) hops on the back end. Nothing too sharp, and definitely maltier than the ones from Bamberg, but still squarely in pils territory.
Quite the surprise all around. I didn't expect to see this, and even after ordering it I didn't expect it to be this good. Not the greatest pils ever, but one of the better ones in the area for sure.
When you've had your fill with helles, this is worth seeking out as a nice alternative. Plus, the fact that it's draft is also nice so the price isn't so steep.
I know Munich is a hell/dunkel/weiss town, but don't neglect the pilsners from their brewers, too. Don't be afraid to hunt 'em down as I prefer this one to the helles beers from H-P which are pretty tasty in their own right.

Clydesdale from District of Columbia

A: Pours a bright, clear golden color. The tall, white head has a dense, frothy texture. Retention is excellent, and a substantial splattering of lacing sticks to the glass.

D: A very satisfying German pils. Well-done, accessible, and an excellent representative of the style. Enjoyable if you can find it.

I've been coming to Munich for 23 years but only recently discovered this rare bottle on the Hacker-Pschorr menu.

Pils is my favorite style. I've sought them from the Plzen River to the grasslands of Kansas. And this may be my favorite example of the style.

It has that exquisite bitterness, called "frishe herbst," that the best beers of Germany have, for me. The hops tickle the tonsils, the aroma saturates the sniffer, and the aftertaste lingers for a moment and is gone, leaving the imbiber wanting another taste.

One of my favorite beers in the entire world, the Braumeister from Hacker-Pschorr. I've not had it outside Deutschland, but here in Munich, it is hard to find, but very worth the effort for pils fans.

On tap at the Monk's Table. Cheers to Adam for the drink!

The appearance of this pils is classical, with a radiant gold body topped by a frothy white head that laces in sheets and exhibited very good retention. The pale malt aroma results in a distinct breadiness with a dash of honey, grass and metal. Its clean and extremely style-appropriate. The flavour follows through with a bready spine, with layers of honey, lemon, grass and metal on top. Some residual sweetness and a crisp hop bite provides a satisfying ending to a classic German pils. Moderate body with a refreshing carbonation.

I tend to dislike Hacker-Pschorr's offerings, but this one surprised me, and seems more or less a quintessential example of the style, and a perfect hot weather beer.

On tap at the Castle

Tapped a crystal clear gold with a 2 finger cap that has moderate retention and fair lacing quality.

Up front you'd think this was Edelhelle as they use the same malts...you get theat bready biscuit taste laced with woody Hesbruckers and Hallertaus ...then mid palate bittering appears and carries on to the finish to dry it up significantly.

Of all the commercial German Pils I have tried I like this best...very malty yet dry and spicey in the finish

I was quite pleased to find this fresh on-tap at the new Amadeus bar in downtown Toronto. Light in colour with a nice lacing on the glass. Floral hops, taste is a crisp clean Saaz hop bitterness, refreshing.SLightly aggressive carbonation. A well made German style pils.

This one is currently on tap at the Oxford Arms in London, Ontario. Sparkling gold with a medium life whiter foam.Aromas are failrly standard german hops, and subtle malts with some czech style floral notes coming forward. Flavours are floral and bitter, with grassy /hay/barn coming forward near the finish. Creamy, slightly hoppy, and very tight. Decent.

I had this on-tap at the Oxford Arms in London, Ontario.

A: Clear golden-yellow; fluffy off-white head; not much retention, but it leaves a little lace. I expect a rocky head from a Bavarian Pils to last.

S: Quite hoppy (metal, grass & hints of spicy aromas), with an underlying breadyness.

M: Moderate body is fairly well attenuated. Clean & crisp, slightly prickly (not as smooth/creamy as some). Carbonation on the light side of moderate.

Braumeister Pils from Hacker-Pschorr Bräu GmbH
Beer rating: 83 out of 100 with 29 ratings