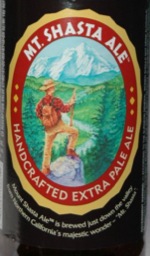 Notes:
View: Beers
Reviews: 16 | Ratings: 17 | Log in to view all ratings and sort
Reviews by Reidrover:

Bought in the 22 oz brown bomber from the local organic food place.
Its a rather insipid average looking ale..a dark golden colour,little to no head,minimal lace.
smell is oddly , for an Pacific Pale, mostly of malts..theres some hop in the far background.
Taste again is mainly of malts at the front then the whole thing fizzles out..little hop aftertaste.
Pretty boring on the tongue..thin.
Not a great attempt at a Pale..with the malts on the front of the tongue I thought maybe this was going to be an English style pale..but it really never went anywere.

Lists itself as "extra pale ale" - never been sure what that is supposed to mean. Little attribute of a pale ale here - some generic malt flavor with a bit of apple juice. Hops were unimpressive and less than called for in a pale ale. Overall, I would have pegged this in more of the bland amber ale category.

This ale had an amber color with quickly a dissipating head. Light malty aroma with a good malty flavor but absolutely no hops to speak of; which is really disappointing for a pale ale. Aftertaste was pleasant. If Butte Creek changed the name to Mt Shasta Mild I would think this is a pretty good beer but as a pale ale its mediocre at best.

Appearance: Actually this looks rather good when the 650ml is poured into my 22 ounce Mug all in one go. A jolly decent off-white creamy vanilla head quickly forms and it lasts as well. The Main body of the brew is a fantastic looking orange-amber that is perfectly clear. Fine bubbled carbonation lends a nitro- like conditioning when gently swirled.

Taste: Pale malt start with a light fruity feel. Very mild bitterness which has sweet malts punctuating it all the time. Fruity malt overtones with minimal hop balance leaves it a little skewed, but not annoyingly so, it just makes it rather one dimensional. Gentle crisp feel with a lively refreshing presence. Tasted fresh and Cask like at times.

Mouthfeel: Very average, average-average, mean, median feel, middle of the road, center stage, ..did I say the mouthfeel is average?

Drinkability: I quite enjoyed drinking this at first.then it got averagethen it got boringsomehow its appeal rapidly faded. Nothing bad.just a little boring. Needs more of a hop balance and this could be a rather attractive offering.

Overall: Not bad but its really hard to get excited about this one; it is far too one-dimensional and as such a tad bland.

Appearance  Light orange in color with a non-existent head.

Smell  This has some nice malty notes, but its supposed to be a Pale Ale. I can pick up some faint citrus hops but thats it.

Taste  The malt isnt bad, but theres nary a hop to be had. The malts are sticky and sweetened like table sugar.

Mouthfeel  Light-bodied with a sugary finish.

Drinkability  I kind of liked this one, but did I mention that it was all malt and hardly any hops?

Pours a mildly hazy orange with no head to speak of.

Smell is mostly sweet grain and toasted grain. Hops seem to be absent here, maybe a little bit of a tea odor.

Taste is sweet and thinned out. Flavor here is mostly malt and that is about it. Mild woody finish which is all the trace of hops I can taste. Slight acid in the flavor. Tastes like a beer that has been watered down. Flavor is MIA in Iraq.

Drinkable as is water. There are no flaws here but it tastes like a watered down beer. It is only the fact that there are no flaws that this gets even a 2. I rate this one a big don't waste your money.

Visually, this beer possesses brilliant clarity. It is a bright sunny copper color with very little carbonation and an eclipsed head. Unlike the dramatic grandeur of its namesake however, Mt. Shasta Ale presents a more modest profile in its aroma and flavor. It is malty but not imprudently imbalanced.

The bomber I drank devolved from little to virtually no carbonation as I drank it. Aside from this, the Mt. Shasta Ale was not problematic. It is a modest beer to be certain, but still quite clean and refreshing.

Pours to a golden hue with few bubbles. Head, what little there was, is gone pretty quickly. Very little carbonation remains. Odor is malty with no hops detected.

Taste was nothing to write home about. The sweet malt needed a balance of hops but this beer doesn't provide it.

The lack of carbonation leads to a poor mouthfeel. My mouth literally felt coated with sweet water.

Definitely dropped more on this beer than it was worth. Not recommended.

Consumed in October 2004 from a 22 oz bottle purchased in Redding, CA. Hmmm, odd beer. Definitely not an ale though. More like a lager or something. Poured a dark orange rust color with very little head and very small amounts of lace. Had a heavy malt scent, which I thought was weird. Am I drinking an ale? Tasted lots of malt also and virtually no hops. Maybe a tad, but very small traces at the most. It did taste good though. It was tricking my mind making me think it was something it wasn't. I liked it, but not as an ale. Worth a try though.

Poured into a pils glass aggressively it forms a loose thin bubbly head that fades to a whimpy thin cover. Light copper hazed up body. Nothing to see here.

Has a rather large sweet and doughy malt bill that is unimpressive and annoying. This offering really is a watered down mess. The malts really didn't allow this to be crisp clean or refreshing in the slightest. Hops are basically an afterthought as you really have to dig to find them and once again they can't muster enough strength to get past the lame malt package. Wet blankets start to appear as it warms. Suggestions of citrus and fruit lie way underneath the body and are welcomed.

Notes: A waste of shelf space. Until I hear they've re-vamped the recipe this is unfortunately 1 six pack and done.

Poured a nice orange-golden color. Small head which disappeared quickly. Minimal lacing. Light carbonation.
The taste had a mild hops beginning with some malt tones. Quite bland. A suprising lack of character.
The mouthfeel was cleansing. Overall, for an APA it seemed to lack character and cohesion. Not exciting.

A- Straw/gold color, light white watery lace and a thin white watery head.
S- Extremely clean, refreshing and crisp hops...most predominant are the grassy and floral notes(cascade hops deffinitly present, as well as a couple others).
T- Very smooth malty tip, but the hops pick up quickly in the middle of the body with definite grassy and floral flavors....The finish is surprisingly clean for an American Pale Ale....the hops are in the body and the finish is really smooth...there is a hint of fruit in the finish maybe some peach and orange.
M/D- Medium carbonation, medium bodied. Really unlike any other APA that I have had....More hopy than its English counter part but the hops make themselves know in a very different way....Definitely worth a try...it might become a regular fav....especially when I just saw it for 7.99 a six in Charleston. I agree with the person below my review....might be good for a new craft beer drinker, and deffinitly good for a session.

Started my beer passport at Terry's tonight and saw this on there and figured what the hell and made it my first one. I had never had it before, so why not right? Seemed like a good enough choice at the time...

A - Poured a very clear golden amber, mostly yellow. A nice tow inch or so head quickly faded and left behind nothing. No side glass lace at all. What was there was a nice golden yellow liquid with a ton of bubbles coming up from the bottom of the glass, looked about average.

S - Very light, that would be the best way to describe it. Some light tones of grain and perhaps a mildly hoppy back, but nothing that really jumped out to grab you. Some light cereal and maybe a touch of banana but again I am probably reaching here, very light average smell.

T - Nice, a good pale ale. It was nothing outragous or crazy in any way. Just your typical light pale ale. Nice small dry hoppy back with a decent grainy profile up front. It really was nothing that extravegant at all, Lots of grain not much else to see here.

M - Crisp and clean. No real lingering aftertaste. It pretty much was a sgulp and done brew. Nice carbonation and a good feel on the palate, that was about it.

D - Pretty good. I could probably session this one a good part of the night. It was light enough and non descript enough to really be able to put down a good many of.

Overall your average pale ale. If it is around you can go for a try, but I would not seek it out b any means, Better then any macro, but there is alot better out there for sure.

Aroma nicely balances malt and hop components. Color is a clear amber-golden, typical of a pale ale, not much head. Flavor is smooth, malty, just a tad thin, with some hints of hops. A good ale for a laid-back time, or as an offering at a party, or with a meal.

Poured an amber color with quickly a dissipating head. Light malty aroma with a good malty flavor but absolutely no hops to speak of which is really disappointing for a extra pale ale. Aftertaste was bad. Poorly hopped, very astringent. This is a weak Extra Pale and I will rate is such.

Pours a slightly murky grain color with a little carbonation running up the glass and pretty much no head and only a tiny bit of lacing here and there.

Pale malts are the most noticeable thing about the nose, as well as a slight fruity/peachy note. Not much else there, I don't get much in the way of hops, which worries me a little bit as this is supposed to be a pale ale.

Well, my worries were warranted (nice alliteration, yes?). There is absolutely no hop flavor at all in this thing. Pale, slightly buttery malts up front with a little grain flavor through the middle, coupled with a hint of fruitiness towards the finish. No bitterness or hop character anywhere that I can tell, though.

Slightly crisp and smooth mouthfeel, but it's light-bodied and needs a bit more carbonation in my opinion.

This is moderately drinkable, but it's not fantastic by any means. I got it when it was apparently retired, so maybe some age had a bit to do with the lack of flavor, but it's really not that impressive. It's beer, and it's better than a macro, but it really doesn't stand up to the APA standard that has been set so high by the big boys of the category.