Niagara Peach Mead
All or Nothing Brewhouse 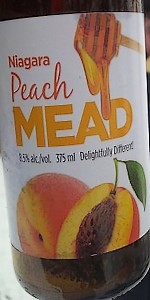 375 mL caged and corked bottle from the LCBO; no best before date. I've skipped this one a few times over the past six months, but finally broke down and decided to give it a shot. Served slightly chilled.

This braggot pours a murky, unusually effervescent golden-apricot colour, producing nearly an inch of fizzy white head at the surface. It rapidly fizzles away, leaving behind a thin line of bubbly foam along the perimeter of the glass. Even long after the head is gone, bubbles continue to reinforce the collar, constantly making an audible crackling sound - I don't think I've ever encountered a beer that does this; it's really quite remarkable. The nose is moderately enticing, consisting largely of apricot, Fuzzy Peach candy and orange Tang, with notes of honey sweetness and booze. A little floral; quite a nice bouquet, actually.

This mead delivers big peach flavour, as advertised. I cannot shake the image of Fuzzy Peach candies from my head, but that's not to suggest that it tastes solely of sugar and confectionery - juicy apricot and nectarine flavours also come through. Finishes with a mix of honey sweetness, sugary peach candy and a light touch of booziness. Medium-bodied, with mild carbonation levels that gently prickle the palate - it feels soft in the mouth, but still noticeably fizzier than I recall their cranberry or blueberry braggots being. I don't mind the livelier mouthfeel, but it does sort of hurt this brew's "mead cred". Still, this is a very sippable beverage that is just plain difficult to dislike.

Final Grade: 3.71, a B grade. Niagara Peach Mead is a solid braggot, and is almost definitely the best Trafalgar product that I've ever purchased. The flavour profile leans toward the sweet/tart side, so this brew won't be for everyone - in fact, it's likely the most saccharine of the Trafalgar meads that I've tried - but if you like peaches, you can't go wrong with this one. Yummy stuff, for sure; I've ragged on Trafalgar in the past, but this one impressed me enough to earn a recommendation. Give it a shot while it's still around.

Appearance - cloudy, peach and bronze in color. No head no lacing, no visible carbonation. The vibrant color makes up for everything else.

Smell - peach and apricot, a hint of boozy aroma. Nothing else detected even after multiple whiffs.

Taste - plenty of peach, but it's more subtle than the nose, the taste doesn't come out and smack you in the face. The taste becomes one of a ripe peach and some apricot too. Fruity, juicy and yummy.

Overall - a good mead, one of the few I've enjoyed from this brewery. I would enjoy again, but for its steep cost.

Bottle: Poured a bright golden color mead with a fizzy white head. Aroma of sweet honey notes with loads of peach notes is not as bad I was expecting. Taste is actually quite enjoyable with some good notes of peach with some honey notes and residual sugars. There is some unrefined notes but subtle enough to not mess with this mead.