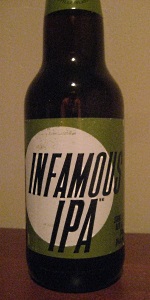 Golden color in the glass. No noteworthy hop presence, fairly bland effort. It is a refreshing beer, probably more suited to daytime than night. Pleasant, but unremarkable.

Heavy caramel malt use is evident with C-hops providing a very early-mid 2000’s type of IPA. Mouthfeel drags down the drinkability. If this beer were leaner in respect to caramel malts and body, I think there is potential here.

I had this poured from a bottle, which can be difficult to find in Ottawa. Even more rare, it was a small size (about 12 ounces, presumably 355 ml though I forgot to check). It had some hop, not all that potent, well-balanced by mild malt sweetness. It's not at all like a typical west coast IPA unless I had an old bottle.

In the bottle in a glass , doesn’t matter Scrub IPA. GIB IPA is falling fast ...too much too fast so many others to pick from today yesterday is where this IPA belongs. Sad really Used to like this brewery Try other GIB seasonal brews much better

From the 12 ounce bottle, Infamous pours clear and golden, with a big white head that hangs around. The aroma is mild hops. The taste is big hops, mostly piney, with a lot of bitterness. Hey, it's an IPA, right on target with the taste. Maybe there's just a touch of caramel. Pretty good stuff, and well worth a try.

A light IPA. Good taste, easy to drink, nice caramel color but nothing special. Good for those that want to try an IPA but are afraid of it being too bitter. Good flavor in it, could taste the piney and citrus hops but nothing really stands out. Would definitely drink again

Had on-tap at the brewpub in Vancouver. Poured into a pint glass.

T/F: Biscuits and bready malts giving way to an evergreen dominated hop profile. Slightly peppery and herbal, a dash of citrus, but dominant notes of pine and spruce. Well carbonated and well crafted. Finish is dry and bitter.

O: A solid IPA if not spectacular. No bad flavors here and an easy drinker for sure. Not the best IPA out there but it gets the job done.

Pours a pale copper colour, thumb of head with some retention and sporadic lacing. Nose is mild with bready caramel malts and hints of floral hops. Flavors follow worth much the same, caramel malts dominate wit hints of leafy hops on the finish. Medium bodied with a touch of dryness on the finish. Overall a decent offering, and on par with what I would expect.

Ugh, this is just so aggressively bland. Decent looking amber color when poured in a glass, but very little head. Smell is... bland. It just smells like bready malts with maybe a bit of a floral tinge. Taste is bland, as well. It's really hard to come up with any descriptions because it doesn't taste like much. It's slightly floral/herbal, doesn't have much in the way of hop beta acid bitterness (a good thing), but it also doesn't have much of anything else - it's just... slightly hoppy, I guess.

I wouldn't have as much of a problem with this beer if it wasn't advertised as INFAMOUS IPA - infamous makes you thing "oh wow, that's a bold name, i bet this beer has a really bold taste" and then the style makes you think this will actually have something to do with hops and IPAs. In truth this is actually a rather anemic pale ale that probably wouldn't even make the cut at a shitty dive bar in Oregon, to say nothing of Southern California. But because this is Vancouver we're talking about, nobody bats an eye when Granville Island releases yet another aggressively bland pale ale remarketed as an IPA just because they can.

341ml bottle. GIB is apparently relabeling and/or reworking a number of their old-school offerings into their new-ish 'Under the Bridge Series'. I have been informed that this falls into the latter category - an altered recipe with more IBUs than the now mothballed Brockton IPA.

This beer pours a clear, bright pale golden amber hue, with three fingers of puffy, densely foamy, and mildly bubbly ecru head, which leaves a decent band of sudsy lace around the glass as it slowly recedes.

The carbonation is quite understated in its low-lying frothy contributions, the body an adequate middleweight, and generally smooth, a teeny airy creaminess arising as things warm. It finishes off-dry, the now musty fruitiness and grainy malt persisting and going where the supposed hops apparently fear to tread.

While this may have more bitterness overall than its predecessor (I don't remember that floral character before), it remains a plain, if still mostly enjoyable version of the style - the British influence hard to shake. Not something that really lives up to its name - which isn't all that surprising, as Granville Island Market is no longer the wretched hive of scum and villainy that it used to be, either.

Infamous IPA from Granville Island Brewery
Beer rating: 82 out of 100 with 57 ratings