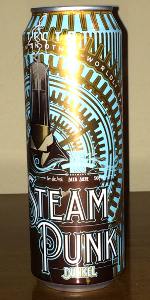 Notes: As the name suggests this is a Dark Wheat Beer. Traditionally a German “Wheat Ale” this light bodied, crisp flavored cold Ale has become one of Vancouver Islands favorite brews. This beer has a refreshing graininess in the flavor profile with the addition of 35% White Wheat.
View: Beers | Place Reviews
Reviews: 5 | Ratings: 22 | Log in to view all ratings and sort

Longwood Brewpub 'Steampunk Dunkelweizen' @ 5.0% , served on tap at Stein & Dine'15 , a 650 ml bottle & a 473 ml can
A-pour is a dark brown from the tap/bottle/can to a very dark brown in the glass with a small beige head leaving a spotty lace along the stein
S-white wheat
T-nice taste overall , bit waterty on the swallow
MF-ok carbonation , medium mouthfeel
Ov-ok dunkelweizen , seems to be Victoria's favourite Longwood beer
prost LampertLand

From a bomber bottle.

Appearance: Pours a burnt red ochre brown with a victorian lace coloured head made up of small and medium sized carbonation bubbles, dissipates rather quickly and settles into a very nice ring and light surface remnants.

Aromatics: I get a few scents - but most prominent is an odd nutty citrus that I just can’t seem to describe. Has a decent combination of fresh bread mixed with a toasted bread scent. I do get really faint malty notes, but they are far from sweet caramely as I would normally expect.

Taste: Never had a dunkel before, so this was an experience. My first sips were burnt sour. An almost lemony zing mixed with fresh cut wheat and grass. It is unique being so dark I was expecting something creamier and subtle. But it has earthy coffee character with a little cacao bitterness so that there is little to no aftertaste as it finishes.

Feel: medium-light body, not as crisp as I was expecting and the carbonation does almost disappear. It has a very abrupt finish (not quite dry) but it is nice given its somewhat fast paced taste.

Overall: Not sure if it’s my cup of tea. I do enjoy its colour and I love sour beers (even though I’m not sure if this is common to Dunkels). But it seemed a little too much wheat and not enough malt. I’m going to go middle of the road on this one until I have a few more Dunkels under my belt, and maybe I will revisit this one in the future.

Poured from a tall 568 mL can into a weizen glass. This beer appears to now be called Steam Punk Dunkel.

Appearance: rich amber-brown hue with a little haze and a pretty strong effervescence (though this is hard to discern through the darkness). Head is two fingers of frothy light-tan foam. I find it quite attractive!

Smell: quite malty with toast, biscuit and chocolate. Not a whole lot in the way of wheat or classic weizen esters, but the chocolate is nice.

Taste: a bit milder than the aroma. Toasty and chocolatey but without so much biscuit (thankfully); this is kind of like an amber porter, in that it doesn't have a lot of weizen character. Still, it's not at all a bad beer.

Mouthfeel: medium body with a decent carbonation and creaminess. Appropriate enough for the style.

Overall: this is a relatively quaffable beer; I quite like the chocolate, although I would prefer some more estery weizen yeast character.

i must say that this beer suffers from a burnt flavour that really cuts down on the drinkability. The colour and smell is right but i felt a lack of balance and finish. A lot of longwood beers suffer from an off balance that kinda ruined the desire for another pint

I sampled this at the brewpub in a generous 6 oz glass. There's no Pacific Northwest twist... this is a Dunkel Weizen, through and through!

Steam Punk (Dunkelwiezenbrau) from Longwood Brewpub & Restaurant
Beer rating: 81 out of 100 with 22 ratings