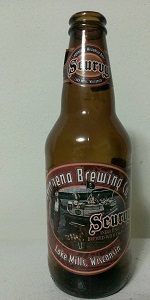 So rare and so wonderful. Bitter Woman made PERFECT.
But I can't find it anywhere, any time.
''Availability in Spring'', officially -- so it says.
Tyrenena is from Lake Mills near Madison, WI. and it's always a pb. finding their exceptional beers. So what's the pb.?
I live in Milwaukee county and I can't find any more Scurvy in the second week of June. What about distribution?
Update: Scurvy reappears on the shelves mid July 2018.

A: Pours a crystal clear medium copper in color with moderate amounts of active visible carbonation rising from the bottom of the glass and moderate burnt orange + faint golden yellow colored highlights. The beer has a finger tall dense foamy beige head that slowly reduces to a couple of small patches of medium thick film surrounded by a large patch of thin film covering the remainder of the surface of the beer and a thin ring at the edges of the glass. Moderate amounts of lacing are observed.

M: Medium bodied with moderate amounts of carbonation. Hints of dryness in the finish.

O: Enjoyable old school East Coast style IPA - kind of a throwback but definitely a beer that I could have again. Drinks pretty easily and hides the alcohol well.

Cool orange pour, lots of citrus pulp I think floating around? Is that what I see? Aroma didn't pop hops or citrus. Bummer man.

Taste did impart some citrus. Had plenty of hopping. Caramel malt notes in a large way. Thankfully not balanced, but minorly disappointing given that I'm usually impressed with this brewery.

Had on tap at the Pig & Fiddle. L: It pours copper gold under a 1” dense sudsy cream colored foam collar. S: Rich citrus aromas. T: A malty attack with citrus from the fermentation, from the hops and what tastes like added citrus. The three different sources of citrus enter the palate at different points adding depth and interest. F: Medium body and carbonation. O: A refreshing, citrusy IPA.

A great hops aroma. The flavor isn't nearly as intense initially as you'd expect, but there is a decent bitter aftertaste. A little bit of a floral touch in it.

Aroma is surprisingly faint. Pale malts and orange. As noted in the description, the orange peel is strongest.

Taste is a nice balance of sweet caramel malts, citrus, and pine. A little bit of bite from the hops. Orange zest is strong, and dominates the citrus. Good bitterness on the back end.

Medium body. light carbonation. Refreshing, but a bit resinous. More of a sipper, but easy to drink.

Overall, a good brew by one of Wisconsin's most underrated breweries.

Pours a clear orange golden color with white head. Citrus, oranges specifically, with floral notes, and just a hint of grassy pine on the nose; follows onto the palate. Finishes with more citrusy orange flavor.

Reddish-orange in color with a creamy thin head. Smell some hop and citrus, but not much. Another strong PA by brewery. Crisp citrus with a little different combination of hop than bitter woman. A very crisp finish in which the bitter lingers.

The smell is of citrus - I smell orange peel - but, it's mild and not sure if it more from the power of suggestion. Caramelized grain is in the back.

The taste is of orange and grapefruit. Toasted caramel malty backbone gives a supporting sweet balance to the upfront bitterness. Pine/resin comes through in the finish. The alcohol is slightly noticeable.

It is medium-bodied, smooth with a mild (tangy?) bite.

Not sure that orange peel adds much to this, but that's fine. Overall - a solid American IPA!

A-Clear ruby orange, not much carbonation or head.

T-Starts with more malt than needed and a nice pine note. Ends with mild citrus and a slight bitterness. Hops are harsh.

M-Medium bodied, not much carbonation, some hope resins.

O-Was hoping for more out of this beer, the hops were not dialed in and the added orange wasn't were it needed it be.

Poured from a 12oz bottle into a pint glass.

Tastes of orange zest and not much else.

Mouthfeel is nothing incredible, definitely lacking something.

Overall this is a decent beer, but I would not go out of my way to obtain this brew again.

Another gift from a friend that make an annual pilgrimage to WI.

A: A light cooper colored beer with an orange hue. Produces a good head stand on pour. The off-white head is made of cream bubbles with a decent retention time when given a somewhat aggressive pour.

S: A medium strength aroma of crystal malt and citrus hops. There is a moderate fruit ester and a faint diacetyl making me think the yeast is more English than American.

T: A medium-strong citrus hops flavor and a medium-strong hops bitterness along with a medium malt sweetness dominate. There is a far amount of orange esters that seem part hop part yeast derived. The balance is fairly bitter. The finish is off-dry with an aftertaste of oranges and hops bitterness.

O: A decent IPA with a good balance of hops and malts hat isn't overly bitter, not that it would be bad thing. There

A bit shorter review today, Pours a nice clear orange and a finger of white head, nice and hoppy smell with pine and citrus and a bit of malt, taste is not as citrusy as I was expecting for a IPA litterlay brewed with orange peel.... Piney, malty, and a bit of citrus in the finish. Decent IPA, I remember liking this one more a bit more a couple years ago. Will Still gladly go through this 6 with a smile on my face!

A solid IPA from a local brewery. This was advertised as being brewed with orange peel and although I could taste a slight bit of orange, I was a little disappointed that it wasn't a stronger taste. That said, it was crispy, citrusy and refreshing. It didn't really differentiate itself from many of the other IPAs on the shelves but since it is a local brewery (10 miles from my house), I may but it again.

Overall, this is quite nice. I like the way the citrus pairs very nicely with the hops. Definitely worth trying if you like citrusy hops.

M - Carbonated and bitter taste, some oiliness from the hop residue.

O - Solid IPA from Tyranena, but I was hoping for more citrus and orange flavors. It is a nice late Spring beer that I will enjoy.

A - Dark amber orange color, with a giant frothy white head. Tons of sediment floating around in the glass, an unquestionably unfiltered beer. Significant amounts of lacing coming down the glass.

S - Not as much hops as expected (or hoped for) in the nose, but still a citrus aroma from the hops.

T - Light hop presence, still mildly on the bitter side. However, I enjoy my IPA's ridiculously hoppy. Citrus / pine and orange flavors. Very good, but could be better.

M - Sticky, resinous mouthfeel, but still on the clean side for an IPA. Fair level of carbonation.

Overall, this was a good beer. I would like to grab a fresher bottle and see if it comes out being hoppier, but in all I am still a fan. The only other brew I have had from Tyranena Brewing so far is their Rocky's Revenge Bourbon Brown Ale, which was probably a better and more complex beer than this, but this IPA is still delicious. Overall, I am impressed with Tyranena and want to try more of their beers.

amber pour with a finger of head which quickly diminished. smells of 2 row barley, caramel, and a slight citrus hint. the flavor is fruity and citrusy up front, with floral hops and a heavy sweet malty backbone. medium body and creamy mouthfeel with moderate amount of carbonation.

a very malty english style ipa with a twist. i like it.

Appearance: Nice copper tone, but the carbonation is flat and there is no foam or lacing.

Smell: Strong orange peel. Not much else. A bit to strong.

Taste/Mouthfeel: Taste is more strong orange peel. Mouthfeel is quite flat. I might have gotten an old bottle.

Overall Drinkability: A very, very average IPA. I would rather try this on tap.

Taste: caramel and bread in the start followed by bitter citrus and orange hops with the hops drying in the end

Overall: Really surprised and impressed with how heavy bodied this one is. This one is solid. One per sitting, but I would pick this up if it were in my area.

From 8/9/12 tasting notes. Enjoyed this on tap at the Micro, during my annual trip to the Wisconsin State Fair. Served to me in a 16oz clear plastic cup.

A) Golden amber with nearly 2 fingers of frothy head, that had a little orange tint. Nice retention and a bit of lacing.

T) Again, plenty of citrus. You could definitely pick up a bit of the zest from the orange peel. Enough malt sweetness, keeps this in balance for my tastes. Clean finish and pleasing aftertaste.

O) Really a solid IPA on all fronts. Tyranena has quite a few beers that I really enjoy, and this is another. Glad to recommend.

A - Tiny chunks float in the golden-amber colored beer as a large foamy white head froths up with moderate retention and a thick lacing coating the glass all thick-like!

S - Hoppy from the heavens! Fresh floral hops inject a citrusy squirt, also from the orange peel added, and mango hints on the back end. Caramel malt adds a background sweetness for a balanced IPA aroma.

T - Despite the caramel malt base, Scurvy is fruity and floral as hops jump my tongue in a pirate-like frenzy. The orange peel zest aids the hoppy bitterness in my mouth-puckering while I revel in a fantastically unbalanced hop bounty.

M - Enough bitterness to make even the burliest of pirates growl, "YEAAAARGH!", Scurvy is crisp, medium-bodied, and refreshing with a rather clean finish.

O - Drink scurvy matey, it sure ain't bilge water! Tyranena's Scurvy is a delicious IPA, abounding in hoppiness that convinced me, while I was thinking of ridiculous pirate puns, to re-watch the Pirates of the Caribbean series. Now to get more Scurvy!

copper toned body with some soft off white head.
The nose is like sweet sugar coated oranges.
A sweeter IPA, not very bitter, reminds me of those orange slices candy my grandma used to have. Simple and shallow.
mouthfeel is medium to full for a 6.5% IPA.

nothing off, but not really desirable.


Scurvy from Tyranena Brewing Company
Beer rating: 87 out of 100 with 544 ratings