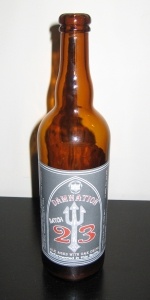 Notes: We turned our regular Damnation recipe into a Tripel. It is bittered with Tomahawk and has Sterling and Cascade in the mid-boil and finish. The beer was then aged on new American oak chips for two to three weeks.
View: More Beers | Place Reviews
Recent ratings and reviews. | Log in to view more ratings + sorting options.

Batch #69.
10.75% abv.
In my fridge since acquiring in a trade years ago, still taped.
Vigorous pour yields no head, no lacing, over a medium to dark amber body. Nose of raisins, caramel, molasses, banana, clove, and booze. Taste of raisins, banana, and a sweet/sour thing going on as well. Damn tasty and a bit less booze flavor then the aroma would portend. Thin feel, but overall a very pleasant experience. Cheers!

Opened with anticipation. It's been 5 years.

This one pours a darkish golden color, with a small head, and not much in the way of lacing.

The oak aging and time in the bottle has made this one taste absolutely nothing like a tripel anymore. It's got a creamy mouthfeel, pretty thick, with oak, vanilla, cherry, and a decent level of oxidation. There's no real cardboard flavor, but there's definitely some flat, "dead" sherry notes that are fairly nice. There's a bit of pear and apple yeast flavors too, the only real indication that this is a tripel. There's no sign in the flavor that this is 11%.

There's a very low level of carbonation- it's still there, but barely holding on. There's a very creamy mouthfeel, but the low carb is tough.

I feel like this may be *slightly* over the hill, but not overwhelmingly so. It's an interesting effort nonetheless.

Taste was mainly alcohol heat, a pungent yeast presence that is super estery. Alcohol burn and oak the most prevalent things going on here for me. Don't really get it, normal Damnation, vastly superior.

Corked and caged 12.68oz bottle poured into a snifter. Batch number 69, which was bottled on 09/01/11 according to Russian River's batch logs.

A- Pours a cloudy amber with tons of bubbly off-white head, quite a bit of floaty sediment is noted.

S- Banana and clove notes on the nose, as well as just a funkiness that I can't really place.

T- Initially I get some fizzy tartness along with clove and spice. The oak is noted but faint in my opinion.

I haven't had many Tripels, but this one is an enjoyable sipper.

A- pours a clear golden orange color with a small fizzy white head that reduces completely, leaving some lace behind 3.75

T- spicy & herbal up front with lots of fruity esters, notes of banana, clove and phenolic flavors. Notes of oak kick in before finishing with orange marmalade

O- a different take on a tripel, it’s got the classic triple flavors, but enhanced by oak and los of fruity notes