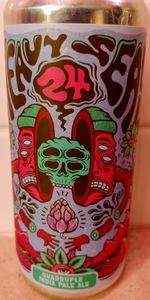 Notes: What better way to celebrate 24 years of brewing what we love than with x4 the hops? This quadruple IPA is our really big way of saying thank you. Bursting with notes of grapefruit, orange and ripe stone fruit, it brings a juiciness to every celebration.

Without the support of your crew, we wouldn’t be here today. We love you (almost) as much as we love good beer. Cheers to you, and cheers to 24!

Growler into pint glass. Pours a slightly hazy amber with a brief off-white head. Essentially no lacing. Initial impression is heavy malt, banana, pineapple, muted caramel, and maybe some peach. Alcohol is pretty well hidden but not entirely so. Mouthfeel is medium-sticky with just a little bite. Finish is semi-sweet, resinous, and a bit boozy. I must admit that I enjoy high-octane IPAs - the alcohol makes any flaws seem tolerable. All in all, I think this is a really enjoyable quadruple (?!!?) IPA. I'd revisit in a heartbeat!

T: ripe pineapple and banana - reminds me of a juice box;

M: medium bodied - sticks to your tongue and mouth; moderate carbonation; moderately dry finish; there is a touch of booziness, but this is crazy smooth for 14%;

O: a little too sweet for my taste, but really well done;

Notes via stream of consciousness: Holy Christopher! 14% ABV!!! Will the hops be able to stand up to the amount of malt that it takes to get to 14%? Let's see... it's poured a slightly hazy amber colored body beneath a two finger's width of creamy off-white foam. The aroma is not that hoppy, nor is it that malty. There is some malt there, but not like you might expect from a big doppelbock or barleywine. And there are some hops there but they're kind of like those hops you find in so many Euro lagers, just a bit "generic" without any really clear notes. That's the case here; I'm looking for the "grapefruit, orange and ripe stone fruit" listed on the label but finding none of it. Well, maybe a little bit of orange, oh wait... and a hint of peach. Let's taste it then and see what we get... it's definitely malty, and there are more of those tropical fruit flavors there, but they don't pop. It's certainly not juicy like a New England style IPA, and I don't think the malt is covering it up either. I just think that four times the hops you normally use is dependent on what the first amount of hops you used was, and then how they were used. This to me seems a bit like an English-style barleywine with American, or these days, New Zealand, hops in use. So what specific notes do I get. Let's start with the malt. It's grainy, sweet but not too sweet, and gently caramelish with golden caramel. It's a bit honeyish as well. There's an apple-like fruitiness that's probably coming from the yeast, and then a spritz of alcohol which is to be expected at 14 freakin' percent alcohol! For hops I'm finding some orange that almost becomes like orange marmalade in the golden-caramel malt, and some peach that appears midway but then comes alive at swallow which is nice. Oh, and there's some grapefruit as well, following that, but mainly just the pith lingers into the finish. It's an OK beer in terms of hoppy fruitiness, but it's pretty great as a strong ale. I was expecting more alcohol to show but it doesn't. That's essentially my overall opinion of the beer but let me wrap it up. In the mouth it's medium-full and dextrinous. A firm bitterness balances that, and with the assistance of a splash of drying alcohol it has just a dollop of fruity sweetness lingering. The head held pretty well, and perhaps even better than that considering the high alcohol content, but it also left some nice craggy limbs of lacing throughout the glass. So, as previously noted, this is a pretty solid strong ale but it's not the hoppy masterpiece that the label makes it out to be. Would I buy it again? Absolutely! This is a very nice, after dinner drinking while watching telly, or reading before the fireplace sipper ~ adjust that to reading 'in bed' as no one has a fireplace anymore, and if you do, and you're like me, it's too much work to clean it out to make it worthwhile to fire it up except for really cold nights and special occasions. Worth trying though.
Review #6,966

"Heavy Seas is known for making robust, powerful beers and a wide variety of IPA's," says Heavy Seas Brewmaster, Christopher Leonard. "Recently, we've also been having a lot of fun with hazy, juicy, hoppy beers that have been well received. So, we decided to put it all together for our 24th Anniversary Ale - a 14% ABV, 75 IBU Hazy "Quadrupel" IPA brewed with oats, wheat and hopped to absurd levels with over four pounds per barrel of Citra, Galaxy, Enigma, and Simcoe. There's enormous buzz in the brewery about this beer. We can't wait to get it into the hands of all of our fans."

16 oz can poured into an imperial can-shaped glass.

Overall
The aroma is severely off putting but everything else checks out. ...and a whopping 14% at that!

Solid anniversary IIPA from Heavy Seas...hoppy, dank, barely noticeable 14%abv. Poured a golden color typical of the style, notes of dank, hoppy goodness followed. I would imagine this to turn to a “barley-wineesqe” beverage quickly given the %abv, so enjoy fresh!

This is a "Quadruple IPA". 16oz can poured into a tulip. Pours golden with nice clarity and has bubbles racing upwards; small white head that fades leaving solid retention and lacing. The aromas have citrus along with some floral notes. Some crackers and bread. The flavors basically follow the nose for the most part. More floral notes. Some lemon and grapefruit. Some pineapple in the mix. Mild hints of pine. More hints of crackers and bread. Subtle hints of caramel. Slightly sticky. This one is ultimately bittersweet along with a subtle spiciness. Malts do their thing without completely dominating. Subtle warmth along with some warm alcohol in the finish, but it's not hot or boozy at all. The alcohol is actually well hidden considering the ABV. Mouthfeel is full-bodied with moderate carbonation. It's fluffy, smooth and dangerously drinkable.

This is a solid brew. It's big and bold while ultimately remaining balanced. Not bad at all.