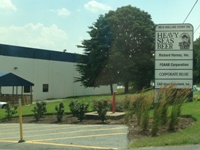 Notes: Brewery:
Beer takes us on adventures. It allows us to discover new flavors and cultures.
Our quest for great beer can lead anywhere, from corner pubs to faraway breweries. For Heavy Seas founder, Hugh Sisson, beer altered the trajectory of his life. In 1980, intending to become a stage actor and director, Hugh's plan was to move to NYC after completing his course work for a masters degree in theater. Hugh's father, Albert, a Baltimore area businessman, persuaded him instead to come "help" at a newly opened family business, a tavern called Sisson's. When Hugh showed up to start what he assumed would be a short-term position, his father tossed him the keys to the pub, said "OK, don't f*** up!" and walked out the door.

Our mission:
To sail new brewing horizons, guided by the winds of traditions, and driven by the quest for adventure. Born near the harbor of Baltimore and raised in the spirit of exploration. Heavy Seas has been independently brewed since 1995. We strive to craft brews that capture your sense of adventure.

Put the wind at your back and enjoy the Heavy Seas.

If a beer needs updating, please propose an edit using "Beer Tools" on the beer's page. Thanks!
Heavy Seas Beer in Halethorpe, MD
Brewery rating: 3.76 out of 5 with 12527 ratings