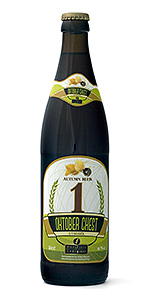 When poured, a very large head forms. It sinks slowly to an off-white finger thick lid, leaving some odd lacing on the glass.

The smell is surprisingly bitter, almost like a rough German pils. Some lightly roasted hints, some nuts and bitter almonds. Chemical flavours in the background. The smell is not very well balanced.

The taste is a bit tart and dry. Some notes of sweet malt and nuts. Alcohol, perfumed sweet notes and a touch of bitter almonds in the aftertaste.

The carbonation is strong; the small bubbles sharp. The liquid is thin.
Maybe this bottle was somewhat infected?

It says on the label:

... "is produced with a multi-step infusion mash process, during which a particular variety of Italian chestnuts "Marrone d'Appennino", is added. Raw chestnuts are toasted to desired point, the day before brewing."

A: It pours hazy brown with a glowing tone. The head is large, white creamy and fluffy, it stays for a really long time, and leaves some lacings.

S: There is a light roasted tone (probably from the chestnuts), some malt (mostly caramell but I'm guessing some chocolate as well). But there is obviously chestnuts but also some dried fruit.

T: This was kind of a dissapointment - I really wanted to like this beer: The taste is a bit funky, sour and bitter at the same time, not as balanced as I guessed it to be from the smell. Anyway there is some malt and some chestnuts and there is a light roasted tone.

M: Fullbodied and not to many bubbles. The aftertaste is a bit dry and bitter.

D: Well, chestnuts in beer isn't my cup of tea. But this isn't a bad product. Try it if you find the concept interesting.


Oktober Chest from Birrificio Lodigiano
Beer rating: 2.48 out of 5 with 2 ratings