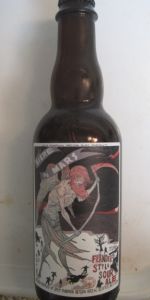 Notes: A sustaining beer that is brewed to comfort in the gusty ides of March and welcome in a wealth of warmer weather.
View: More Beers | Place Reviews
Recent ratings and reviews. | Log in to view more ratings + sorting options.
Rated: 3.85 by brandoneast from Texas

Look: reddish light brown with a thin off white head.

Taste: It is sweet, toasty, a tad of red wine, grapes, and a hint of lemon, but it is very mildly tart.

3.42/5  rDev -17.4%
look: 3.75 | smell: 3.5 | taste: 3.5 | feel: 3 | overall: 3.25
A: Pours up a hazy, thick, amber with a creamy, foamy, 1 finger head.
S: Immediate tannic funkiness, common to all Jolly Pumpkin beers, with some passion fruit coming through.
T: Tart, but not overly sour with some lactic tartness coming through, some slight chocolate coming though and some toastiness as well, hints of lemon, the malt is fairly heavy, but the tannins present in the nose don't come through nearly as much. There is definitely some funk here from the oakiness, but like I said, the tannins are kind of downplayed.
M: a bit too full and a tad watery.
O: I know that this is technically a biere de garde, but this is not a biere de garde. If this is a biere de garde, then the term means little to nothing as far as the consumer is concerned, and if it only refers to process, then the term is essentially useless. This beer is fairly good, but I've never had a Jolly Pumpkin beer that blew me away, and this is no exception. It's fine, does it deserve to be one of the most highly rated biere de gardes on BA? No, no it doesn't. That being said, most American Biere de gardes are BDGs by technicality, bearing practically no resemblance to beers like cuvee des jonquilles, or tre montes from st. sylvestre, or l'angelus au froment from brasserie lepers (y'all sleepin on that one, check it out, it's beautiful), so yeah, this beer is fine, it's a good sour beer (though not especially sour, not a complaint, just an observation), but if you never have it, your beer life will not be wasted.

4.05/5  rDev -2.2%
look: 3.25 | smell: 3.75 | taste: 4 | feel: 4 | overall: 4.75
Had on tap in the Jolly Pumpkin restaurant in Chicago's Hyde Park neighborhood within the U of C redeveloped Harper Court. This is my 4th different Biere d' garde from JP (unusual to have that many offered by one brewer.) But now that I spent a few minutes on their website, I understand their business model in the Belgian sour/cuisine niche. So, it makes sense to have that lineup from across the border, taking advantage of the French kitchen's most food-friendly biere and, frankly, one as well-suited for a variety of foods as my #1 favorite, the saison.

Biere de Mars has JP's signature tart/sour/Brett; but not, thankfully, as strong as some. I had this on a hot day and it was refreshing and paired very well with the table's frites. I rate JP's de Mars with average Looks, but malty Smells are all there with just enough of tart in the nose. Tastes come in even better because the hops and tart clean the palate very clean for the next frite and its heavily butter-fatted mayo.

I give a high OA rating because I like JP's strategy (particularly its deal with the non-tart North Peak to diversify their beer list and grow their business beyond the narrow tart niche.) But liking JP is not necessarily liking their beers; only 1 (Maracaibo, a sweet brown) of the 8 beers did I give an above average rating. My tolerance for sour/tart remains low no matter how many times I try to change that.

Reviewed by BlunderfulGuy from Nebraska

Slightly hazy dark auburn in the glass that shines up to a reddish antique copper in the light, with orange amber highlights. It leans more towards amber bière de gardes than blondes. Finger of tight off white bubbles that quickly recedes to a thin layer. Whatever lacing sticks around inevitably gets pulled back into the body with the next sip.
Lots of tart red apples, hibiscus, a little white grape and red raisins, lemon, a little pepper, caramel. A whiff of an oak aged Manhattan with a dark cherry as well as balsamic or sherry vinegar. Bright sourness and fruits with a bed of earthy and malty aromas beneath them fit this style of bière de mars. Miniscule alcohol spice.
Much more focused on the sour aspect in flavor, at least while it's cold. A prick of acid followed with red apple skin and extra tart green apples, lemondrop or Warhead candy. Cherry and strawberry and caramel with subtle cola syrupy flavors and oak. It finishes with some sour and funk and earthy toasted wheat bread, with a light bitterness. Some alcohol in breaths, but overall hidden. Just below cellar (or just above refrigerator) temp. is where it works best for me, it's balanced between sour and malty and a lot of good flavors bubble up. Warmer yet, the oak, caramelly malt, grape, and hint of cornbread soon become musty and the bright fruits and acids get shy.
Medium bodied, effervescent at first then soft in the swallow, and dry.

Enjoyable and interesting, but not amazing. At first it seemed overly sour but the rest of the flavors came out with some warmth and it leaned towards the malts. It feels like it's going downhill though, if I were to age it any further I'd wax it hot off the bottling line and stuff it in a very cool, dark place. That said, not aging well comes with the style and it's still great for the summer.

3.68/5  rDev -11.1%
look: 3.75 | smell: 3.75 | taste: 3.75 | feel: 3.5 | overall: 3.5
This dark brown gusty looking beer was poured into a tulip. The rest of the appearance had a slim half finger-ed white foamy head that dissipated within less than forty seconds. A minimal amount of spider web lacing slid down the glass. The smell was mainly a tart combination of blackberry, cherry, and currant, all pretty pronounced and leading towards a sour fruitiness. The taste was mainly sour and tart with a nice side dose of the cherries to amplify the the sourness. On the palate, this one sat right at a medium on the body with not so much of a sessionable aspect to it as it comes across pretty sharp across my tongue. Overall, I say this didn't seem too much like a Biere de Garde but a nice sour ale.
Jun 18, 2017
Rated: 3.75 by crobinso from Colorado