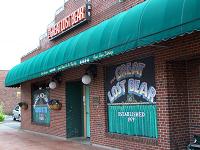 Visited here from Boston for the first time last week.
Awesome beer-centric atmosphere and decorations, further evidenced by their huge and heavily local-based taplist.
Bartender was very knowledgeable and happy to share a few samples and chat about beer when time provided. I admired his duty and affinity for and towards his customers.
Food was good. I had the hot chicken sandwich. Not a fan of the sliced mini-potato "fries", but that could just be me.
Overall, an awesome visit to a place that was on my list to hit when I visited Portland. Will definitely hit here again.

Somewhat of a place where it all started for me. Some may have called it my "descent," but I called it the place where I took my "red pill" to delve further into the world of beer. Everything I've been in there, always a clean bar. Parking may be crappy, but food was always good to fantastic. Service can be iffy at certain times of the day. Close to 70 taps of beer - mostly New England breweries, but Dogfish Head, Victory, Ommegang, Flying Dog were some of the other breweries that showed their faces for beers to be found there. It's just down the street from RSVP and further back from Bier Cellar. It's worth a stop if you're in the area.

A big, homey restaurant with a great deal of character. If you're not looking directly at the bar or a beer menu, it would be easy to think this was just a large, New England-style family restaurant.

The decor is woody and softly lit, with a good amount of beer swag and some kitchy/rustic bear-related decorations. It felt like the last major renovation happened sometime between the early 1960s and mid 1980s. This, to me, is a good thing, as it goes against the pretentious, prefab homogeneity of seemingly every beer bar that's been opened this decade (you notice how EVERY place looks like an ikea set piece?)

The staff is large is attentive. Meaning, there's lot of staff members (they weren't particularly big). Again, I like this. Restaurants have been cutting down on staff nationwide in an attempt to cut costs, and that leads to crappy dining experience. GLB don't mess with that.

The beer selection was fantastic. Second best in the city, after Novare Res. They have a heavier focus on American beers than Res, however, meaning they're more likely to get in rare stuff from US brewers, wheras Res gets in Cantillion and whatfor. The Bear also does semi-tap takeovers every Thursday, which they call "Microbrew" showcases.

Their website beer list is updated pretty regularly, but it's not perfect. Printed lists are done up daily.

Overall, a venerable institution that's basically a must-stop if you're in Portland.

my first stop on a sweeping New England tour this really hit the spot after a long travel day. Cool to see all the Maine offerings and some national brands. Good vibe and food too. Really set the bar nicely for my trip.

Love this place. My favorite vibe in town. Colorful, neighborhood and non of the pretense of some other big beer spots. Still attracts tourists and people from all over without getting watered down. Selection is just crazy and changes. Wings are the best in town. I've had a bunch of the menu and would go for a slab and crab or a one eye bacon cheeseburger right now. Place has been around for about 35 years and I hope it's around for another 35.

Tons of beer! Been here many many times. Stuart is an awesome waiter!

Great selection of beer including Allagash, Bissell, and Foundation. Service was a bit slow and disjointed and i wasn't really crazy about the food i had but would give it another shot just for the tap list.

Had been touring and tasting @ the Allagash/Industrial park breweries while on Beer Safari in Portland , Maine. Some locals said that I would probably like The Great Lost Bear if looking for supper and some more regional beers. Who was I to doubt?? And very glad I didn't. What a great place. Really cool fairly spacious semi-dark comfortable crowded restaurant with a huge big fun bar. Full bar with wine and cocktails moving regularly with a busy wait staff on a busy Saturday night. But this place was clearly beer centric with an excellent beer menu. Well constructed to guide choices by style, good descriptions...but mostly a heck of an exciting tease. Because the choices were extensive, varied and high quality. Flights were available. Staff were very friendly and cross covered each other to be sure you never lacked help or had an empty glass. Food wise menu was equally extensive with great choices ranging from a broad restaurant menu of appetizers, salads, soups, entrees, etc..to just great bar food. .Just a great place to eat. drink and have a bunch of conversations with staff (Mike) and others (Elena) at the bar. For me this would be a must stop if visiting Portland.

Great food, great beer selection, all around a great place

Great place to hang out and have a beer....good food too!!