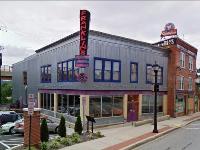 In 1992, Mike and Debra Franklin purchased the former Hyattsville Hardware Co, a Hyattsville institution located on a dying strip of route 1, and opened Franklins General Store & deli, helping to recapture the spirit of bustling community activity. The deli soon became a popular lunch spot, and eventually outgrew its limited space. In 2002, Franklins closed the deli portion of the store, and opened a 200 seat brewpub, and doubled the size of the store.

A Destination Point:
Since its inception, Franklins has been a destination for local families and craft beer lovers alike. The food menu combines quality brewpub fare, together with a host of locally sourced seasonal specials. The store supplies the neighborhood with cool gifts, toys, wine, beer, candy, cards and much more.

If a beer needs updating, please use the "Update This Beer" link located on the beer page. Thanks!
Franklin's Restaurant, Brewery & General Store in Hyattsville, MD
Brewery rating: 3.76 out of 5 with 414 ratings