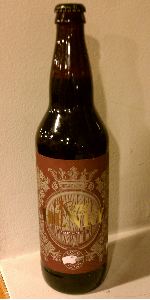 The beer is listed as a “Barleywine – English” on BA.

The beer was removed from a 40ish degree temp fridge after having been refrigerated for approximately 3 years. Beer poured into 2012 BCBS Tulip.

Appearance: Poured beautifully. A wonderful, deep mahogany with a seemingly black backing. Limited head quickly disappeared. Murky (but it is 3rd use, so of course it is); only visible at the edges. 4.75

Smell: Rich and boozy. Alcohol heat up front followed by sugars (momentarily), before quickly giving way to granny smith apples, cotton candy, gummy candy, and finally raisins. Man is this complex. No barrel on the nose (but never is with BA barleywines compared to stouts). 5.0

Taste: This is heaven. There’s so much here. There’s layers. Heavy and prominent is the classic leather, with tobacco taking a back note (more so than in 2013/2014). The taste leads with vague sweet fruits, followed by sweetness and leather followed by a drying, oakiness. The booziness is subdued compared to a fresh Bourbon County, but the alcohol is warming and “soft”, starting in the chest and moving up.

How does this compare to 2013/2014? There’s a smoothness with more rounded corners compared to 13/14. The same way that a more refined whiskey has fewer harsh edges, the same thing here. In this case, there are no harsh edges. This is rich and decadent without an overemphasis on the raisin, which is where many barleywines suffer. (Yes, Raisin is a common and delicious flavor, but sometimes it becomes overpowering.) 4.80

Mouthfeel: It’s about perfect. It has just the right viscosity, but perhaps once warm – if anything – it comes off a tad syrupy. It feels wonderful in the mouth. (Yep, I said it.) 4.75

Overall: I’ve had this for probably 3 years, and I’ve been scared to open it. I looove 2013/2014, but particularly 2013. I’ve always dreamed of this, particularly after having rare and especially being a fan of wheated whiskies. I’ve built this up to be this monolith that I’ve worried it wouldn’t live up. Turns out, it does, but not at first. When I first opened the bottle, I was disappointed. I said, oh man, this must be past it’s prime. The flavor is every bit as good as MJK (which I had just 3 days ago), but there’s something about it – perhaps it not being as fresh – that just left it feeling like it was lacking. Well, first impressions aren’t everything. After a few ounces, these first impressions faded away. It’s a little low carb compared to what it should be from the age, but that hampers it only a little given that it’s a barleywine (and something like MJK is served still).

This is every bit as good as MJK. Really, the only thing that sets those two beers apart is the age (this is older now), and the ABV. That beer is 20%, and the booziness is noticeable. For some reason it works, though, and it works well. I’m getting a bit lost in this comparison, but the point is that this isn’t just world class, it’s at the pinnacle. I am very grateful that I got to experience this beer, and feel fortunate to have done so. 4.75

Rated by Beerbom from California

In our group tasting the first words to come out of anyone's mouth were my old lady noting pecan pie, and that was a good first impression.

Several varieties of caramel develop on the nose, contrasted by tons of splintery oak, but it somehow manages to be exceptionally smooth on the palate, with no unpleasant notes of any kind that you might expect out of such an old brew. 9 years out, (or 11 from the brew date?), this is definitely showing its age with a dusty, walnutty oak character continuing to pervade in flavor, which is accented by a hint of red grape, but it's still incredible.

As it warms, the slick heat of the medium body comes with a light, fine yet crackly carbonation that lifts milky chocolate and a touch of coconut from the barrel. After coming to a dry finish, the exhale brings forth some peppery char as a tingly numbness teases the palate.

S- bold aromas of leather and peppery tobacco jump from the glass with notes of pipe tobacco & black licorice. Malty notes of caramel and toffee and followed by dark fruit aromas of dark cherry, figs & blackberries. Undertones of molasses & burnt brown sugar. The barrel matches the rest of the aromas, adding notes of spicy oak, vanilla bean and barrel juice. All ingredients combined add a dark wine aroma, very similar to port, the complexity seems to open more as it sits

T- the complexity of this beer blows me away. Opens with and onslaught of malty caramel and toffee, with equal parts figs, raisins and dark cherries to compliment. Mid-palate brings out a spicy and peppery pipe tobacco note, as well as dark chocolate fudge brownies, black licorice, tootsie roll & black strap molasses. The cherry note continues throughout, before the barrel finishes it out, adding seasoned oak, vanilla coconut and delicious barrel juice. Lingers of caramel, cherries and bourbon

M- medium-heavy body with moderate carbonation leads to a creamy mouthfeel that continues into a viscous, almost chewy finish, just a hint of alcohol warmth lingers

O- lived up to the hype in every aspect, the best English Barleywine that I've had

Big thanks to @jportillo for sending this over in a trade several years ago.


A: Pours a very dark brown, nearly cola colored in the glass with fizzy light tan head just under a fingers width. Looks like no issues with carbonation even with all these years on it. Some nice ruby hues when held to light. 4.5

S: Aroma is excellent, it has huge wonderful bourbon notes. Wonderful char, some subtle vanilla, an almost peat-like character. The base beer barleywine notes are quite subtle at this point, with some dark fruits and candies sugar. 4.5

T: Very complex and incredibly delicious. Not gonna lie I was super worried about oxidation with 8 plus years on it but amazingly it is absent. This is a bourbon bomb. Dark fruits up front, then tons of barrel characters with charred oak and rich vanilla. Subtle bitterness, some cocoa notes on the back end. The flavors linger forever on the finish. It’s incredible. 4.75

O: Phenomenal. Worth the hype. The depth of the barrel notes are impressive. So psyched it held up strong after all these years. Makes me curious as to how it was fresh. Feel privileged to be about to try to this gem. Merry Christmas!

Rated by JLK7299 from North Carolina

Rated by Momma_Knapp from Connecticut

Rated by mig100 from Texas

4.79/5  rDev +1.7%
look: 4.25 | smell: 4.5 | taste: 5 | feel: 5 | overall: 4.75
Poured into a snifter. A murky rusty, muddy copper-brown color with a modest tan head, Nice scant lacing in the glass. The aroma was smooth whiskey, caramel, sweet malt, and cherries. The taste was incredible. Silky smooth caramel and stone fruit but balanced perfectly with a subtle bitterness and ever so slightly tart cherry note. Vanilla and toffee on the finish. The 13% ABV virtually disappeared on the finish. Just incredible.
Jul 24, 2018
Rated: 5 by Winston3737 from Michigan

Reviewed by Rristow from Ohio

Reviewed by BEER88 from Washington

Reviewed by Gambyt20 from Illinois

4.88/5  rDev +3.6%
look: 4.75 | smell: 4.75 | taste: 5 | feel: 5 | overall: 4.75
At DLD, buddy saved me a pour of this whale from the early am bottle sharing in line. The BEST and I mean the BEST friend ever as this isn't the first time he has saved a pour of a whale for me to try. Had a beautiful rustic orange brown color and even looked thick. Had a great balance of the barleywine flavors with the used BCBS Bourbon barrels. Just something else I can't describe partially due to lots of other beers during DLD. But easily this was the one I recall and stood out from all the other great beers. That alone tells ya how great this one is.
May 14, 2017
Rated: 4.69 by ellswrth from Oregon

Reviewed by rmpic82 from Kansas