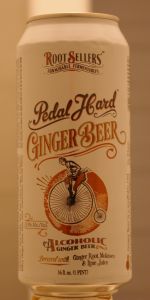 Look: slightly cloudy and clear, no head, some bubbles, what you would expect from a ginger beer

Smell: some ginger, lime and hints of brown sugar/molasses

Taste: pretty laid back ginger wise, it’s there but not particularly spicy as compared to something like cock and bull, lime and molasses are also present

Feel: a solid amount of carbonation and some warmth from the ginger

Overall: this is good but it really isn’t a beer, throw in a shot of vodka for a nice Moscow mule as this makes a quality mixer, it’s also good enough to drink straight but won’t be for everyone

No reviews?!? How Hard CAN it be?!? Actually, I am always proud to be the first as a part of The CANQuest (tm), my stated desire to drink & review EVERY CANned beer in existence. I have been slacking lately as my desire to eradicate the Bottle Backlog here at Chez Woody has taken precedence. I scored this CAN during my most recent New England foray and while I have already reviewed its Hard Root Beer CANterpart, I have held this in abeyance since I will mix it with some Rye Whiskey after CANpleting my review.

From the CAN: "Ginger Beer is a quaffable Old World beverage first brewed in England in the mid-18th century. Root Sellers' Pedal Hard Ginger Beer is brewed in small batches with simple, natural ingredients. Use it as a mixer or enjoy on its own. If you pedal, Pedal Hard! [undersigned] Greg & Scott".

I Crack!ed the top and began a gentle Glug, followed by an inverted Glug, but in both instances, I could not raise more than the briefest finger of foamy, rocky, bone-white head. It disappeared like a ghost into the walls. Speaking of ghost-like, the color was a cloudy Pale-Straw (SRM = 1 -2), ghastly and ghostly in its appearance. Nose smelled like freshly-shredded ginger root! Phew! That'll get yer attention. It was offset by a light lime citrusiness. Mouthfeel was medium, The taste was riotous ginger! My sinuses blew out, their cavity filled with a ginger spiciness & I sneezed to welcome it. Phew! Finish was spicy & dry and it occurred to me that this was a mixer. A shot of Rye to the rescue! Beautiful. If you like it on its own, so be it, but I like it as a set-up.

16oz can. Poured out a clear, bubbly, golden yellow color with a small, fizzy head of foam. It smelled like a ginger ale with some sweet notes. Nice ginger taste with a snappy bite.