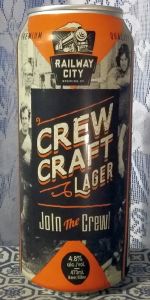 Notes: Crew Craft Lager pours a golden straw colour with a thick, frothy white head. To the nose is an inviting subtle hop aroma. On the palate is a ready back bone ending with a refreshing, crisp finish.

Crisp. Clean. Refreshing. For all the hard workers out there, this one's for you. Cheers from our Crew!

Tallboy can picked up at the brewery in St. Thomas this past weekend; one of several (relatively) new lagers from Railway City that I managed to nab. Best before May 1 2017 and served slightly chilled.

Pours a crystal clear golden-yellow hue, with 1.5 fingers of loose, soapy white head perched atop. It weakens and wilts over the next 3-4 minutes or so, depositing little in the way of lace - but at least it has the courtesy to leave behind a wide, foamy collar and thin cap. Fairly typical-looking pale lager, but the nose is dull and almost reminiscent of a macro. Grainy sweetness is the main contributor, with faint hints of apple, lemon and grassy hay.

More flavourful than I was anticipating after sniffing it a few times. That grainy, doughy pale barley malt sweetness from the nose remains a dominant presence, but in the flavour profile, fruity notes of pear and red apple come through with more vigour. Faint shades of lemon rind, with grassy, floral hops rounding out the back end satisfactorily; each sip finishes with a touch of grain husk sweetness that swiftly withers and fades. Quite light in body, with moderate carbonation levels that are about in line with most other craft lagers - not as aggressively prickly as a macro lager, but it still feels quite crisp and lively in the mouth. A solid session lager, and a definite step up over the SleeMolBatt branded stuff.

Final Grade: 3.78, a B+. Railway City's Crew Craft Lager is an admirable effort, but at the end of the day it's still "just a pale lager" - a well-made one, sure, but not a particularly novel or interesting brew. The malt bill does remind me of their old Canada Southern Draft - very grainy and doughy, with light sweetness - though the hops come off a tad bit bolder than that particular predecessor. I like it, and if they can get this into the LCBO for $2.50 a can (or thereabouts) I think it'd become a semi-regular purchase for me.