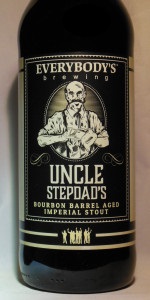 Mouthfeel – A bit thin but it coats the tongue nicely.

Overall – A big beer, not too bad but the alcohol was a little too noticeable.

Poured into a Fremont small snifter. Pours a nearly pitch black, opaque in the glass with a thin brown head that dissipates to pataches with slight lacing. Aroma of mild dark toasted malt, bourbon and faint cocoa. Flavor is mild dark toasted malt, bourbon, hints of vanilla and cocoa, finishing with bourbon and a bit of coffee bitterness. Medium bodied with slight creaminess. A quite bourbon forward big stout. The malt body is a little on the light side to support the big barrel influence, but still is supportive enough throughout the taste. There is a little bitterness that tastes more like coffee than hops in the finish, and lingering dark malt and bourbon that is pretty darn good. The malt flavors seem to be nice, but are muted under the bourbon barrel, I'd like to taste them a little more, but I like bourbon and this was a good vehicle for it. The big ABV is noticeable, but supported by plenty of flavor. My favorite offering from Everybody's so far.

This was given to me as something of a X-mas gag gift by my sister-in-law. As it turns out, this was pretty decent for a gag gift beer.

So this is a barrel aged RIS from the folks at Everybody's Brewing.

The beer pours the expected blackish brown color with good head retention and lacing. On the nose, there's considerable bourbon, but not all that much else. Still, I do pick up some underlying vanilla, coffee and chocolate that is pleasant. The beer actually delivers a bit more flavor than I was expecting on the palate, given the nose, though once again the bourbon dominates. On the other hand, mouthfeel is pretty nice in this beer, and is soft, creamy and fairly full, with a long finish. The flavor profile tended to replicate the nose otherwise. Alcohol is very well integrated into the flavor profile, and frankly, I would not have guessed that the abv. is in excess of 10%.

This beer appeared to improve as it sat in the glass and warmed a bit, reminding me very much of a poor man's Velvet Merkin. I'd take the VM any day over this beer, but on the other hand, this beer is considerably cheaper than the VM (I think I saw it for $4.99 at a store). For a $5 bomber of BA impy stout, this is really pretty impressive.


Uncle Stepdad's from Everybody's Brewing
Beer rating: 4.15 out of 5 with 8 ratings