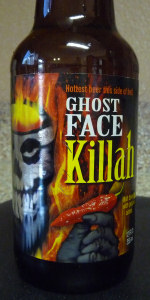 Notes: Made with 6 chiles including Anaheim, Fresno, jalapeño, serrano, habenero, and ghost chile.
View: Beers | Place Reviews
Reviews: 185 | Ratings: 590 | Log in to view all ratings and sort
Reviews by logicalparadox:

Chile beers are one of those categories I love because they are hard to do well. Often they come across either overwhelming or underwhelming and few strike the right balance. This one, however, finds balance while being overtly aggressive. Habanero Sculpin is no joke, but think of that one like a Hiroshima... this one is an H bomb.

Really pale with an explosive, but quickly dissipating and large-grained head.

Chile aromas JUMP out of the glass. You don't even need to sniff, just be nearby as it's being poured. Not just heat, but smoky/earthy/fruity hints that speak of true chile essence. You get nuance of those different chiles: jalapeno, habanero, and anaheim in particular.

Flavor is off the charts. This has a real kick. It's hot. Not a beer for those who don't truly want to feel some burn. It gets hotter as you go. Probably the hottest chile beer I've yet tried. The malts and grains play a back seat here, supporting the chile much the way they do for hops in a hoppy beer. Hops, if present, are so well integrated as to not be readily apparent in the face of the thermite grenade of flavor that hits you upon first sip. Finish is dry, refreshing, and with a long, lingering burn that releases fruity and savory chile notes as it fades.

Medium bodied. Crisp enough to contrast the heat level, but with enough backbone to carry the flavors and satisfy.

Overall, I was impressed. One I'll be getting again, for sure. Usually, this much heat would be too much for a beer, but somehow they make it work. Great conversational beer, as it's going to be very, very divisive and people will either love it or hate it.

S - Hot! Spicy and Round! Strong pepper scent. Slight wood smell too. There's not too many other scents besides Chilies.

T - Sweet JEEZSUS! Strong pepper taste! Not nearly as much heat as I thought there would be... But, very spicy nonetheless.

O - Perfect for the style, not much was missed. Would be an awesome brew for a BBQ, or to sneak up on your friends with.... Very unique and delicious. I couldn't drink a whole lot of this one... But, good while it lasts, great to split with a friend, or two, or three...

Bottle purchased at Joe Bean Coffee Roasters. I dunno why I did.

Pours a clear yellow, with a little bit of haze, and no head or lacing.

Smells like really hot and vegetal peppers. Smells kind of ok actually, but I can tell this is gonna be rough.

It's rough. Big surprise. Raging, blistering pepper heat, tastes essentially like pepper juice. If I try really hard, I can sort of tell there's a beer underneath. I can't tell if it's an adjunct lager, or a blond ale, or gasoline, it doesn't really matter, it tastes rancid. No balance whatsoever.

It's pretty light bodied, but not even slightly drinkable. There's a medium amount of carbonation, I guess, it's hard to tell anything that's going on.

Stay the hell away from this. Don't even think about it. You've been warned.

Look: Cloudy pale orange-ish/brown. 1 finger head upon pour, but died out very quickly. Poor head retention for sure. Not much of a foam ring left behind and no real lacing.
Smell: Smells spicy. Roasted peppers and an funky fruity earthiness. A bit of a dirty scent.
Taste: Powerful blast of flavor. You get smoked/roasted peppers and malts. Sweet caramel. A touch of bitterness. Then the heat really cranks up. Flavors go away for a bit because of the heat level, but once it fades, you start to get a drier malty beer with some charred wood flavor.
Feel: Pretty thin. Lack of bubbles makes it uninteresting in the mouth. Still a medium bodied brew.
Overall: I really like crazy hot peppers and food. If you are used to mild salsa and the hot kind it too much for you, do not grab one of these beers. I get a nice burn from this beer - it's plenty hot. There are nice sweet flavors to offset some of the heat. It may be out of balance, but I do like this one for an occasional novelty. I had a few of them over the past 2 years - and try to keep 1 or 2 on hand. You never know when its a good time to break one of these out... maybe to challenge a few friends.

Drank this baby at Dark Lord Day 2015 in a 45 degree day with sideways rain. It helped

This is the worst beer I have ever had in my entire life.

A: Pours a deep, murky apple cider color with a fizzy soda-like head that dies quick.

S: A rich, smoky pepper aroma. Chipotle salsa is what came to mind here the most. Definitely doesn't smell like something you want to mess around with.

T: Opens on the mild side- sweet and smooth with mostly honey and grain coming through. Then there's a gradual build of smoky hot fire that kind of just keeps building and building. I've had ghost pepper hot sauce before, and this never comes close to that kind of heat. But as far as beers go, this is by far the hottest I've had. Not a lot of flavor in this beer, but if hot is what you're looking for, pull up a chair.

This beer is hot. Amid the burn, I could not detect any beers quality. I loved the nose, as it smelled of fresh picked peppers. If you can't take heat, skip the beer and do not complain it is too hot. You are going to burn. After the novelty of trying the beer, I probably will not do it again

Pour looks like you would expect a macro lager to look like, yellow and fizzy. Aroma of peppers abounds, taste is a bit sweet at first, corny, then gives way to the peppers. Not to hot, but defanatly has some heat to it. Swish it around in you mouth for a bit. A lot of jalapeño and ancho flavor is strong to me. Good for a pepper beer, would like to try a freshie.