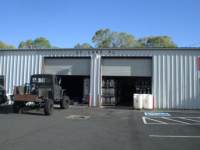 And then it was like, snowing, and then, not, but there were these signs saying you had to have traction tires or chains and a whole lot of people were pulled over to the side of the road crawling around in the snow and I got wondering how our shitty Toyota Corolla airport rental was going to fare as we got higher & higher and the traffic starting moving again, and at the summit, the roads were just a sheet of dimple packed snow, and just as we were the next car to descend down the mountain, shit got all slow and quiet like the moment before you take that biggest hill on a giant, giant roller coaster and I thought about how awful it is that I’m going to die listening to Night Ranger’s ‘Sister Christian’ playing, and then the sun shone through and made for less snow packed patches first one here & then one there, and those patches became stretches with melty snow rivers, and then muddy roads, wet roads, dry roads, Bend…

Long straight gray concrete in a black steel frame topped bar, black steel panel base & foot bar, and a small lower accessible piece on the end. Seating for 5 on one ½ of the bar on black leather swivel cushy chairs; the other ½ of the bar seemingly service seating none. Mirror back paneled barback recessed with a baby spot over digital draft boards in both top corners (beer, style, ABV, and pricing for 4oz, 10oz, & 16oz pours. A pair of drop periscope stainless towers on center; each with 8 handles 4 & 4 logo’d over stainless drainage. Crowl crimpers to both sides, glassware shelved below the bar, & growls on the ends. Drop single bulbs tracing the bar and sunken spots in between.

Step into the lobby merch zone, as I’m looking for a very specific shirt and fail in finding it. There’s a cooler there holding crowls, cans, & bottles. Step up into the waiting area/love lounge; cushy couch action & local art for sale there.

And through to the back bar area. It’s dark and scary, I like. Black laminate topped hooked bar with a fat lip, dimpled cushioned base, & foot rail. Seating 10 on cushy swivels. Curvy swirly overhang with sunken spots. 16 tap tower on the barback, booze displayed, & glassware dangling above. Flats on the ends and slushy machines to one side (blrrrgh). Seating nook with 3 wonky shared benched booths here & 2 more there (me, pointing). Brewerania pieces above the booths, and stuff (helmet, doll’s head, lunchbox, skateboard, cans, bottles, stuff).

Food, as I earned it getting here alive. 10 wings split between sweet chili (picked them pepper off them and ate them laughingly) and the Diablo Rojo BBQ (which were spicier and Winninger). Wings was goods, and I could have easily gone with the tomato basil soup, too.

Very not metal like I swear I recall them being when we were out some years ago. Sunshine server was just that. Beers were good and the food, too. Good house. Should you arrive alive in Bend…

2021-03-12
Visited on a Friday during the pandemic and had a few samples and bought a little bit of beer to take home. It was outdoor only and there wasn't an option for hanging around and having a pint or a flight, which is a shame, but we talked with the worker for some time and she gave us a bunch of tiny little sample pours. They had maybe 8 things on tap and a wider selection of bottles and cans. I really enjoyed the visit, despite the brevity.

Food is GREAT here but the specials go quick...so if out of those go with Bang Bang entree or sandwiches (Cubano or Tonkatsu with homemade kettle chips). RPM is a Bend staple IPA but haven't had many others from Bone that I liked...try and see!

Boneyard doesn’t make a bad beer, quite the opposite. Everything I have had from Boneyard is exceptional! Bone-a-fide Pale, RPM IPA, Armored Fist CDA, fresh Hop, the list goes on and on. The food is very creative “fusion” and not your typical pub-burger or pizza which is really refreshing. Honestly how many different ways can you make a burger?! They are without a doubt the best brewery in the US. This is a bold statement but i’ll Defend it all day long. I’ve travelled extensively throughout the US and Europe and had beer from each of those travels. The only difficulty is getting your hands on some outside of the NW, which is why everyone fawns over Sierra Nevada and Goose Island etc (not bad, but don’t hold a candle to Boneyard). And thankfully Boneyard has the integrity to not sell out to InBev!

The vibe is all in or all out. I'm all in, being an old school punk rock kid. A dingy little 2 bay garage converted into a brewery with the lobby serving as the tap room with some awesome tunes blasting the whole time. No seats. No pints. No bull shit. $1tasters at 2 is each makes you have to try every beer they have, and at an average of $9 a crowler, your bound to take home some of the best IPA's you've ever had. A great place to hang out for a bit. All that's missing is the band. Cheers!

Having visited several other brewery establishments in Bend, OR, I expected something different. After getting my bearings I really enjoyed the intimate relaxed atmosphere. Definitely just a tasting room, don' even ask for a pint, and I highly recommend doing a full tap taster. The staff is very friendly, knowledgeable and quick to answer any questions. They will can up (32 oz.) your selections(s) as you wait. Really a jewel and I keep going back!

No-frills brewery/taster room in a converted former auto repair garage. Off the beaten path but worth the trip. Attitude/vibe is all about the beer. Very knowledgable and friendly staff. Great assortment of branded swag.

No frills growler/crowler fill room. Roughly a dozen of their beers on tap. Staff is friendly, but they're often quite busy, so there's not a lot of time for casual chit-chat. No pints; tasters only for $2 apiece. Metal/punk vibe with mostly 80s and 90s punk playing over the speakers. Beer is of course very good to great; especially their hoppy stuff. I believe they're opening a proper brewpub in the near future, which I'm very excited about.

The main focus is on the brewed product. They'll let you have as many samples as you want (within reason), only charging a buck after the first hit. I really like the smaller size, too, especially if one has to get back on the road. I think they made the right decision to skip the stools and tables, but with the level of quality, I hope they open up a place to sit and ponder.

Great value for the tasting withdraw best beers in Oregon

Favorite beer.. this is the most drinkable ipa out there.

This place was pretty disappointing. It looks like the whole purpose is to get you in and out of there as quickly as possible. They have 5 offerings on draft and you can try each for $1. Then you can either buy growlers or leave.

I visited Boneyard today during my annual pilgrimage to Bend and enjoyed it. I was rather surprised to find that the place is all of about 150 square feet, with no seating. It was rather busy today, the Friday of a long weekend, but service was efficient and friendly so the crowd wasn't a problem.

Interestingly, they don't serve pints here in the tasting room. You can get tastes (I'd say around 2oz) or growler fills -- that's it. Still, the place has a great brewery vibe with a bit of a garage atmosphere. There's Boneyard swag adorning every surface of the taproom, and it's quite charming. They only had 5 beers available, but as always with Boneyard beers the offerings were delicious.

Boneyard is kind of tucked away in a corner of a residential neighborhood, but it's well worth a stop if you're checking out the Bend scene.

This place is a trip, weird hours but super neat story and cool spot with ridiculously great beer!

This is my favorite IPA. Love, Love, Love it. I have gone from Red Wine to loving this beer and prefer it over wine!

Definitely worth a quick stop, but it's not a place meant to kill a day drinking beer.