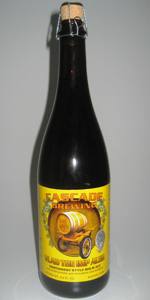 Notes: This Northwest style sour is a blend of spiced Quads, Triples and Blondes aged in Bourbon and wine barrels for over 18 months with orange peel and coriander. Vlad offers a fresh acidity and mild sweetness with flavors of citrus, spice and rich oak. Winner of the Silver Medal at the 2008 GABF. ABV 12.3%

Lots of alcohol and other barley wine smells—treacle and berry.

More sour, which wasn’t present in the smell, than anything else. The sweetness is gone. Decent body with a diminished carbonation level. The tartness is nondescript, simply acidic without a specific flavor. Longer (sour, of course) aftertaste.

3.24/5  rDev -23.9%
look: 3.5 | smell: 3.25 | taste: 3 | feel: 4 | overall: 3.25
2011 vintage here. Nice pop and good visible carbonation on the pour; no head formation; color is an opaque bourbon orange. Nose has lots of sweet whiskey notes, some deeper boozy wheat notes, light oak, a hint of mild citrus. Spice notes have likely faded, but barrel presence is still there after ten years. Taste has a few fruity, vinous notes up front, but quickly the barrel character takes over in a not entirely pleasant way - a good amount of oak and char, a bit of caramel, some age-related papery notes. Mouthfeel is thin but not unpleasant, and impressive carbonation after all this time. Overall, past its prime, and given how barrel-forward it is, comes across as unbalanced.
Aug 22, 2021

Wonderful nose, a bit sour from the wine, bourbon, and I suspect even the quad. Rich and smooth aroma.

Similar on the palate; the sharpness from the wine dominates (I’m assuming, perhaps incorrectly, that this is not an intentionally soured ale). Nice bourbon presence, although it’s definitely second fiddle here. Lots of oak. Caramel, dark wheat, vinegar, dark fruit.

Reviewed by mbunje from California

4.48/5  rDev +5.2%
look: 4.5 | smell: 4 | taste: 4.75 | feel: 4.5 | overall: 4.5
On tap at Cascade Barrel House. Really unique beer. Not too sour. Well rounded. Smell the Belgian yeast and the vanilla. Light in the bourbon. Don’t notice the orange peel.
Flavor is fantastic. Lots of layers going on with a slight tart/sour finish. I feel like every sip is revealing new flavors. Overall this is a must if you visit the brewery or the Portland area. This reminds me of something the Bruery would make or even Russian River. Great beer.
Oct 25, 2020
Rated: 4.45 by sarpedon52 from Georgia

3.68/5  rDev -13.6%
look: 2 | smell: 4 | taste: 3.75 | feel: 3.5 | overall: 3.75
2017 vintage, 11.6% ABV.
Good, but not much more than a very mildly spiced (with orange peel and coriander, the coriander is not able to be tasted, the orange is only a vague sort of citrus character) sour blonde ale of imperial strength that's been aged in barrels (quad and blonde ales aged in bourbon and wine barrels). The alcohol becomes increasingly detracting as the beer warms. Overpriced, would not get again.
Pours a few large, white bubbles, but bottle is still, so no foam or retention. No lacing. Body is a dark golden orange color, with light bringing out (SRM 6-7). Transparent, but plenty of yeast at bottom of bottle.
Aroma is smoothly tart balanced with sweetness, a very pleasant smooth, creamy, sour citrus character (something of a Cascade trademark, you also noticed this aroma in the Citrus Noyaux) mixed with what seems like a hint of cinnamon, some light vinegary notes, and a touch of oak becoming apparent as the beer warms.
Flavor is fairly heavy sourness, fairly strong on acetic acid (apple cider vinegar), but also some tart lactic acid lemon/green apple sourness. Front: tart green apple mixed with an equal amount of apple cider vinegar, light nail polish remover flavor, faintly creamy lemon-citrus notes, slight oak, mild alcohol. Mid: fairly strong acetic acid (apple cider vinegar), moderate lemon and green apple notes from lactic acid, moderate nail polish remover, and moderate alcohol. Back: vaguely defined, though assertive smooth citrus mixed with both lactic (gentle citrus, tart apple) and acetic (cider vinegar) acidity, moderate to strong alcohol flavor, subtle oak. After: lingering lactic acid tartness (lemon/green apple) with acetic acid (apple cider vinegar) close behind, mild dry oak, and medium-low alcohol.
Beer is medium to medium-heavy in body; still, so no carbonation and mouthfeel is exceptionally smooth with no foaming. Alcohol felt fairly easily in the nose and throat, not surprising for an 11% ABV beer, but still not incredible. Closes very dry, with heavy stickiness on the lips and palate.
(D, B, B-, C+, B-/C+)

Reviewed by BerryKumquat from California

4.78/5  rDev +12.2%
look: 5 | smell: 4.5 | taste: 5 | feel: 4 | overall: 5
L: Pours out as a light blonde ale and has a reddish orange hue as it fulls the glass. Neat effect
S: Very strong nose of corriander and orange.
T: A slow dry rush of fizz into a blast of orange and coriander finish into a simple orange aftertaste. Very unique and worth drinking.
F: Light orange beer.
O: An odd unique and memorable beer. While it isn't the strong in any one category, it has a very unique flavor profile that can be enjoyed anytime.

Reviewed by ECShepherd from Texas

4.74/5  rDev +11.3%
look: 4.75 | smell: 5 | taste: 4.5 | feel: 5 | overall: 4.75
Looks like apple juice with an amber color, clear enough to read through. Thick head clears quickly, leaving a white lacing around the rim lasts several minutes. Smells sweet with a light acidity. Taste starts out with a citrus bite with a smooth fruity finish. Leaves a slight and enjoyable dryness behind that doesn't make you fear the next sip. Overall an excellent experience.
Dec 05, 2018
Rated: 4.35 by heddar33 from Pennsylvania