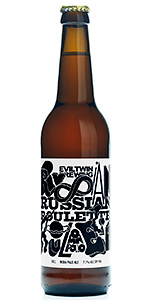 Notes: Shares the bottle design with Omnipollo Russian Roulette ( http://beeradvocate.com/beer/profile/25314/79195 ). You never know which one you get… Russian Roulette!
View: Beers
Reviews: 19 | Ratings: 57 | Log in to view all ratings and sort
Reviews by ncstateplaya:

I understand this beer to be a collaboration with a Swedish outfit named Omniopollo, where the same labeled beer can be either a standard IPA or a Black IPA. I got the dark one, pours nearly opaque I'm always nervous how these Danes/Swedes will handle their hops, it's such a new fad to them they're still learning how to wield the powerful hop. Saying that I welcome their craft beer revolution happening, it's good for beer, a step away from one note one dimensional bland Euro lagers. This dark beer is a bit muddled with yeast sediment, creating a black mahogany brune edged body. Thick tan head, fine speckled lacing, scattered forth. Aroma almost mint appeal in the hops, that are both herbal and leafy, amongst the dark acrid nearly burnt malt profile that this beer has to offer. Also some dark baker's chocolate and bread dough come around within the malt profile.
Flavors come forth with bitterness, strong tea leaf, herbal hop bitterness finishes with dark dry bitter chocolate roasted malt flavors. A bit astringent for sure with the dark roasts and menthol/herbal bitterness weighing heavier with each sip. Mouthfeel is medium to full bodied with a super bone dry finish, and acrid lingering hop/black patent malt bitterness. Overall, a style still in it's formative years, solid aspects just didn't mesh well in the flavor department. As it warms, there's more caramelized sugars allowed out to play, with some dough yeast bread like quality that helps each sip to become a bit more enjoyable.

The colour is black, the three finger head is pale cold brown. It sinks slowly leaving lots of lacing.

The smell is hoppy and roasted. Lots of clean bitter flavours. Hints of coffee and black chocolate. Smooth alcohol, roasted meats, and a touch of liquorice.

The taste is smoother than expected: Creamy coffee and dark chocolate, hints of cocoa powder. The bitterness grows, together with a smooth note of orange peels and grapefruits. Medium body. The aftertaste is a blend of clean citric bitter flavours and smooth coffee-cream notes. The finish is bitter.

The carbonation is medium strong, the few bubbles medium sized. The liquid is dry.

Black ale is a complicated style, as it is supposed to mix the American imperial stout and AIPA styles. But most of the times, the result is an overhopped stout. This one is better than most of them.

Wow, despite a Best Before 2014 on the label, this beer is still very good. Surprisingly, the hop character is still full fledged. Appearance was amazing with a huge thick creamy tan slow to settle head. I'm further impressed that they've been able to tweak it so that the hops blend so well with the roast and dark malt qualities. Very easy drinking brew.

It finds the line where American brown ale meets American IPA. It's dry and hoppy, smoky and sultry, chocolaty, toasty, and zesty. Its the American black ale and Evil Twin reconstitutes its dna with effortless and tasty rewards.

Unlike any conventional IPA, the beer's appearance does little to suggest brown ale. Dark bark-brown in color and with an opaque sheen, the beer develops a creamy sandy-tan head with stern retention and intricate patterns of lace left behind.

The masculine beer continues it's brown ale tendencies in aroma as chocolate, hazelnut, heavy toast, and cocoa rich cake batter rise from the plethora of toasted malt. Very mild wood scents emit from the sweeter and richer notes and give just the slightest glimpse into the hops that I expect.

Flavors however begin to turn toward the hops. Cocoa and heavy toast rise first with strong dark flavors that don't cross the line into roast. Bittersweet chocolates, bitter walnut oils, charred bread, and burnt toffee frame the malt round up, just before the hops command attention at mid palate. That's when the grassy sharpness and resinous pine sap flavors grip the palate and ushers in a dry and decidedly bitter finish.

Medium to start but the beer makes quick work of the malt structures and favors hop flavor and bitterness fast. The finish arrives just as the initial malty richness is felt, the beer seems to skip right over the middle palate and into the acrid dry toast finish. Lasting impressions of heavy toast, cocoa, and pine needles carry over to the next sip.

Interestingly, there's little mention of hops in aroma or initial taste. Even when the hops emerge is takes my memory to American-style brown ales like Dogfish Head's India Brown Ale. But as the bitterness intensifies and the malts drop out, the beer finishes with IPA-like proportions, just with the dark grain elements. It's certainly an inquisitive beer for palates curious about hops and dark malts.

A - Pours with a large, two finger head of tan foam on top of an opaque, black body. The foam settles at a moderate pace and leaves thick curtains of lace on the glass,

S - Grapefruit hops and mild roasty malt with a touch of toffee.

T - Graoefruit and dark sugar up front. Chocolate and coffee come out in the middle, it's finishes with charred wood notes and moderate bitterness along with a lingering bakers chocolate finish.

D - Very dark and roasty, defying the idea that this style should be black but lacking in roast. The hops only really show through in the aroma with but a touch of grapefruit in the flavor profile, the dark, burnt grain dominates. I would normally be out off by the strength of the burnt character, but it has some subtle espresso and woody notes that help make it palateable. The real problem for me is that the hops jut don't take charge the way I would like them to. Not something I would buy a sixer of, but it is worth a try.

A: The beer is jet black in color. It poured with a two finger high light tan head that has good retention properties because it took a long time to die down and then consistently left a short head covering the surface.
S: Light aromas of pine resin hops are present in the nose.
T: The taste has flavors of dark roasted malts along with a moderate amount of bitterness; hints of pine resin are also noticeable towards the finish.
M: It feels medium-bodied and a little crisp on the palate and has a moderate amount of carbonation. The roasted nature and bitterness makes your mouth tinge a little.
O: This beer has a good balance of roasted flavors and bitterness and is a good representation of the style.

Strong aroma is quite hoppy and woody, and has a hint of sour orange. Pours a stout-like sable with a thick and persistent tan head. Satisfying flavor has roast malt, hoppy and woody notes with hints of cloves and sour citrus. Smooth, lively texture has good body and fizz, and leaves a hoppy, smoky finish. No risk of a bad beer here!

Pours a deep amber to black-ish color with a tan head. In the aroma, orange citrus hops. In the taste, a dry citrus rind and some sweet hops. A small hop bite and a medium bodied mouthfeel, with a dry orange citrus rind in the aftertaste. Dry, nice orange citrus and quite tasty.

A: Pours an opaque but clear dark black in color with some moderate amounts of visible carbonation and hints of cola brown highlights. The beer has a four finger tall foamy tan head that slowly reduces to a finger medium/large tall dense cap in the center of the glass and a thick film covering the remainder of the glass with a thick ring. Significant amounts of lacing are observed.

S: Moderate aromas of roasted malts with some moderate to strong aromas of pine hops.

M: On the lighter side of medium bodied with moderate to heavy amounts of carbonation. Hints of dryness in the finish.

O: Overall this is a pretty decent American Black Ale and enjoyable though a little more bitter than I generally prefer my beers. Fairly easy to drink and the alcohol is pretty well hidden even though the ABV is not overly high.

Taste was not good. Harsh bitterness from the hops followed by a rather astringent smokey tasting black ale. Yikes...total miss IMO.

Overall, not good. This was drain poured after a few sips. Really wish I go the IPA version of RR. Oh well!

This is my second of two bottles of Russian Roulette, the other being the IPA, which I reviewed a few days ago. My bottle is slightly chilled and I've poured it into a pint glass.

This beer has a very large head of brown foam. It fills 75% of the glass, but it is shrinking. The liquid is a very dark brown and allows no light to penetrate. Decent lacing remains behind.

The beer has a very hoppy aroma. I was expecting it to be somewhat hoppy with a good balance of roasted malts, but my initial impression is pure hop bitterness. These are earthy, warm hops. Some citrus and pine notes are present. After smelling the beer for awhile, I could detect some roasted malts. There is even a touch of smokiness. It's a very good aroma, one that I like a lot.

If the main two components of this style of beer are dark roasted malts and IPA-level hops, than this beer balances them very well. The initial flavor is malty without being sweet. It's a good toasted flavor, but there isn't any of smokiness that I picked up in the aroma (it comes later though). The hops are bitter, but not oily. Pine resin and some floral characteristics are what I taste. As I swallow, I get some black licorice and hints of liquid smoke. There is some general bitterness that lingers, but to me, the malts leave a greater impression on my tongue.

The beer a flavorful coat that is both bitter and burnt. It's a little similar to a bite of burnt toast...but with hops. There is some film on my lips, but it isn't sticky. The body is somewhat full, and the carbonation feels about average. If I really concentrate of them I can feel some bubbles on my tongue, but for the most part I don't notice them.

This is an enjoyable dark IPA. I'v e never felt like I could drink more than one round of this style at a time, and Russian Roulette is no exception, but I would revisit this beer again in the future. If you're a fan of hops (and if you are like a majority of BA's, you probably are a fan of them), it's worth giving this beer a shot. Even if you don't get the dark ale, but instead the regular IPA, you won't be disappointed.

A - Dark black with a finger of khaki-tan head. Fades fairly slowly.

T - Roasted chocolate and caramel malts, grapefruit, citrus, pine, and earthy hops, some bitterness, some black licorice, molasses, and a touch of vanilla.

A lot in this one, somewhat inharmonious.