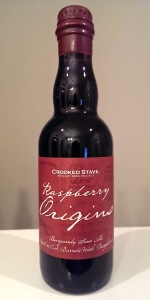 Pours darker than any raspberry beer I can think of. Pours a dark brown with a light purple current through it if held up to light. The head is about 2/5" of beige with a light pink hue to it. The aroma is a mixture of tart brown malt, raspberry, oak and light cranberry feel to it. Hits the acetic and balsamic feels aroma wise.

Taste I will say I definitely enjoyed more than the OG, but still remain slightly mystified as to its high score here. Its still not up to what I would say is an average crooked stave beer. Shares a lot in common with both flanders red and oud bruin, but with a more intense sourness. The slightly brighter, drier, approach worked a lot better for me here, but there is still an earthy soil component to it. Kind of pricey stuff, glad someone else brought it.

Reviewed by bnes09 from Illinois

4.82/5  rDev +11.6%
look: 4.5 | smell: 5 | taste: 4.75 | feel: 5 | overall: 4.75
Deep burgundy red. Surprisingly, pours a dense head which is unfortunately short lived. Perfect aroma of fresh raspberries, oak and acetic acid. Fresh and sweet raspberry jam on the palate. Deep brown ale base mingles with the oak and balsamic vinegar seamlessly. Fairly intense acid, acetic beginning to middle then citric then lactic in the finish. Not a lot of funk. Perfect balance cold but the balsamic dominates slightly as it warms. Feel is aggressively dry and puckering. High carbonation is perfect. Raspberry seed texture coats the tongue and adds to the dryness. As I empty the glass, I can detect an interesting peach aroma which was not there before. Unreal. All the flavors are so authentic and well integrated. Crooked Stave has blown me away yet again.
Nov 10, 2017
Rated: 4.05 by VeganUndead from Virginia

Appearance: A dark burgundy ruby red colour with a just over one finger off pink with a dark orange hue head that dissipated fairly quickly to a thin cap with some nice lacing.

Taste: Sour and tart raspberries and lemon to begin, followed by some light sweet jammy raspberries and a hint of oak. It finishes sour again with lemon, some citric acidity and a touch of grapes.

Mouthfeel: Medium bodied with moderate to light carbonation and a dry-ish finish.

Overall: The aromas were stunning and while the taste didn’t quite match up to the aroma, it was still very good.

Smell is an absolute abundance of fresh crushed raspberries! I also get toasted raspberry seed, sour red grape and peppery but wet oak.

Taste is mouth puckeringly sour raspberries, again in absolute abundance, with a spritz of lime juice making this quite acidic indeed. There are also touches of sesame and raspberry seeds and toasted dark bread.

This is very very sour, almost Warheads level, yet with a soft fizz and medium body, finishing semi dry.

With so much freshness coming out of a bottle dated December 2015, what better way is there to preserve the aromas and flavors of fruit than this?!

The gorgeous, burgundy colored body was capped by a finger-tall crop of bubbly, light pink froth. Solid retention. The crown slowly dropped to a foamy cap. Patchy rings of lacing trickled down the glass.

The nose was uber raspberry forward and pleasantly tart. Freshly pureed raspberries came to mind. Nice jammy sweetness too. Bretty and sour but not overwhelmingly so. Big vinous notes. Red wine for sure. Moderately oaky.

Flovorwise, the beer was much more sour and acidic. Raspberry notes appeared briefly up front but they were quickly overshadowed by the lemony tartness and vinegar-like acidity. The beer turned even more sour and acidic as it moved along the palate. Red wine vinegar came through on the back end. More lemon juice on the finish. Some oaky tannins lingered after the swallow. As the beer sat, fresh raspberry notes really came forth and balanced out the flavor profile. Hint of sweetness too.

I have found most Crooked Stave wild ales to be overwhelmingly sour and acidic, but Raspberry Origins was definitely not so one dimensional. While this beer was quite tart, the raspberry notes were sweet and bright enough to keep things nicely balanced. Hopefully one day I will see fresher bottles of this brewery's fruited wild ales in my neck of the woods, as most of these year-plus old bottles surely do not express their fruity notes as they should.

Reviewed by moose1980 from Germany

4.43/5  rDev +2.5%
look: 4.25 | smell: 5 | taste: 4.25 | feel: 4.25 | overall: 4.25
Minimal head that fades almost before the pour is finished. Beautiful burgundy color though. The smell...so jammy; all pureed raspberries, but with some oak and a hint of a dusty attic. Taste is puckering sour raspberries. Almost too astringent at first, but after the palate adjusts, it makes for a nice sipper. Extremely dry finish, pushing wine territory. Drank at cellar temp, but it should have been slightly cooled.
Mar 04, 2017
Rated: 4.34 by ygtbsm94 from Utah

Reviewed by grover37 from District of Columbia

With an incredibly deep and hazy gaze, the rich ruby ale looks cobbler-like before a scent of earthen, rich and condensed raspberry grabs the olfactory senses and won't let go. Cooked berries lead to a radiant sweet and succulent taste that's jammy, branch ripened and puree-like.

Yet as the ale traverses the middle palate, a transition takes place; one that ushers in a brazen sourness of dry cider, dry white wine and apple cider vinegar with peps of balsamic to dissect the malt sweetness and the berry fructose to a tangy, fruity and tannic remnants of what the fruit once was. Its final taste is premierely sour as crabapple, lime, lemon and sour white grape wash the palate with lactic tartness.

Medium bodied, the beer's lingering sweetness and raspberry identity won't let go. Balancing the sourness fiercely, the malty rebuttal is redolent with raspberry pie, pastry pie crust and all. Dry tart and malty dry, the finish is peppery, earthy with a brisk after aroma of the sea.

Look: Clear deep ruby-brown body beneath a fizzy head of pinkish-tan that dies down not too unlike a glass of cola. It drops to a thin collar around a floating island of a foam in the center. Lacing is limited to nil.

Taste: Initially quite tart, and woody and earthy and fruity. It softens a bit as it warms and some of the carbonic acid of the CO2 is released, but it doesn't become any sweeter. In fact, it may become dryer as the woody dryness of the oak becomes more apparent. It's sour but clean, and hardly "funky" at all. For fans of "fruit beers" this is probably not your thing. For fans of sour beers, and oak-aged beers - particularly those with a fruit component - this is more for you. And as far as that goes, this is one of the most elegant examples I've ever had the pleasure to come across. It's reminiscent in many ways of a Flander's red ale, or an Old Bruin, yet it is neither, and is in fact it's own beast. It's clean and clear, and acidic and fruity - very straightforwardly sour, fruit, and oak. It finishes short and dry with quick fading fruit amidst tartness, followed by a rising dryness from the wood. The alcohol never shows (it's just 7.5% ABV); nor is it astringent beyond the norm for any oak-aged beer.

Feel: Light-medium body and sharp with acidity. The fine-bubbled, seemingly natural carbonation gently bristles the palate before warming to become smoother, but it never actually gets to "smooth".

Overall: A stunning beer in its originality; and for those that can handle its dry sourness, splendid! It's a bit like a sour fruit beer blended with a dry European wine, and I've never had anything like it. For those who'd like to expand their concept of what a beer can be it's definitely worth seeking out.

A: Dark crimson, almost opaque, and minimal visible carbonation. About a half-finger of pink head fades quickly. A nice looking beer - looks almost like wine in the glass, aside from the few bubbles.

S: Tart and acetic acid, raspberries and oak. Some funk, a red wine vinous character and more dry woody tannins with a mild vanilla component. Nice nose on this.

T: Raspberries – overripe and sweet - up front. Acetic acid that's borderline vinegary but not in a bad way. Oaken dryness and mild funk. Lactic acid and tartness. Incredibly fresh juicy raspberry finish with a lot of acetic acid and less citric acid with the associated dryness.

M: A full-bodied beer – maybe a bit more heft than most AWAs. Carbonation sensation on the low side but not flat. Low alcohol presence.

O: I really liked this one. The fresh raspberry flavor of New Glarus but with an actual amount of tart and acid with some funk that the Wisconsin brew is lacking. Really enjoyable. It's probably too acidic for it to become an everyday or session drinker for me, but really enjoyable.

4.29/5  rDev -0.7%
look: 4.25 | smell: 4.5 | taste: 4.25 | feel: 4 | overall: 4.25
On tap. Served in a snifter glass. Pours a dark purple-reddish body, one finger whitish-pink head, good retention, plenty of lacing. Smells of raspberries, light caramel sweetness, lemon, leather, bits of oak. That typical Brett-forward aroma lies beneath the raspberries. Flavour is essentially Origins with a bunch of raspberries on top. It's not overly raspberry sweet, but is reasonably complex with the Brett leather and lemon profile underneath. Mouthfeel is lighter bodied, probably related to the Brett; good carbonation and nice raspberry tartness on the finish. Enjoyed this one a fair bit, price is a bit hefty for a 375ml bottle but fairly accessible in the Denver market.
Oct 16, 2016
Rated: 4.25 by Deltoro from Florida

Reviewed by KensWorld from Florida

A: Pours like dark grape juice, in the glass it is a very dark red brown color, like dark blood, with a fluffy pink head.

S: Very tart, with slight notes of vinegar, and rich sugary raspberry, and a touch of wood. It's like someone condensed raspberries into a sweet puree of sour goodness.

T: Wow. The sourness on this one is really amazing. Mouth puckering sour notes with raspberries, and oak. Sharp and acidic, with a raspberry jam finish.

O: Good god, this is good. This beer treads the line between beverage and experience.