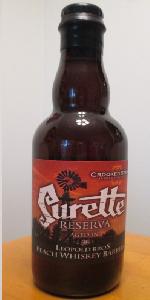 this one is back from the 2013 cellar reserve. pours a transparent amber sienna orange with light effervescent bubbles. nose shows some soft peach over a pungent sour. taste is a sharp tart..body is fairly thick but not syrupy. kinda showing its age. all in all a nice sour w a peach edge. definitely sour though.

Thanks to mrbubbler for sharing this one at his tasting.

Pours a hazy dark orange with a foamy beige head that settles to wisps of film on top of the beer. No lacing on the drink down. Smell is sour with grain, funk, acidic, peach whiskey, and wood aromas. Taste is much the same with sour fruit, acidic, peach whiskey, and wood flavors on the finish. There is a mild amount of acidity on the palate with each sip. This beer has a good level of carbonation with a crisp and dry mouthfeel. Overall, this is a pretty good beer with solid peach whiskey barrel aged qualities that are slightly better in the smell to me.

APPEARANCE: Hazy, but bright orange with a nice, quarter-inch, stark white head. It flairs up quickly then falls within 20 seconds or so, leaving some wisps of foam on the surface.

SMELL: I can smell this the second I pop the top, plenty of peach and tart apple lead the way and I haven’t even poured this yet. A little wet blanket thing is going on once it’s in the glass, but no vanilla or oak…just a little boozy.

TASTE: Again, the peach is impressively strong, but now there is a little vanilla from the whiskey barrels, actually a lot. This tastes like I imagine a slightly tart, peach creamsicle would. That said, it’s a little bready too.

MOUTHFEEL: This feels creamy and silky. The body is light to medium with just a touch of sparkle to it. Very juicy, but dryer than expected.

OVERALL: There is a ton of barrel on this beer and I like that. It still tastes like a Saison, but a very modified one. The peach and vanilla, however, are wonderful with it.

375ml bottle thanks to the person I trusteed for. Orange color, hazed, no head. Aroma was sour vinegar like aromas, no whiskey. Flavor was this odd clash if surette and then a whiskey flavor that was just weird. I can't believe how many beers Crooked Stave puts out that are sort of ho-him and yet locals act like they're the new Russian River. I would have been pretty bummed if I shelled out the $300 for their club because this is no better than the regular Surette, it might be worse.

Brief review - 5 out of 5 tasters agree this smells like canned tuna. Not a pleasant aroma.

Taste is improved from the smell - classic crooked stave flavors with a bit of booze (no tuna to be found).

On the whole, this is okay. Definitely not worth the price.

A - Opaque hazy bright orange colour with a thin layer of off-white head.

T - Tart with a big oak presence and just enough whiskey presence. Bread, spice and hints of apple and peach.

A - Hazy orange / nectarine with peach overtones. Beer has a glow to it. Not much of a white head to it.

T - Tart up front with lemon and oak. Light lactic acid. There is a big Brett and blue cheese funk that comes near the middle. The boozy schnapps aspect comes near the end and gives the beer a slight warming presence. The peach comes in here as well to provide a nice fruit sweetness that balances well with the tartness. The beer is slightly hot as it warms up which gives it a slight alcoholic presence

M - Soft beer with good amount of carbonation in the middle. Slightly astringent from the booze and dry from the funk

O - A nice peach wild ale that brings a good juicy peach with light tartness and the strong Brett we expect from Surette. The whiskey barrels this was aged in brings a slight peach schnapps flavor and light heat

A-The brew is pretty flat with very minimal head, which is typical of the Crooked Stave beers I have tried. The brew is cloudy and apricot/orange in color. Looks pretty still in the glass.

S-The smell is more tart than many Crooked Stave brews, bordering on sour. There is a nice mixture of fruit: peaches, apricots, tart white grapes, and sour green apples. A bit of dough underneath and some oaky funk, too.

T-The taste isn't quite as sour as the smell would suggest, but the brew is tart with an acidic bite to it up front. The fruit flavors are dried apricot and peach (mostly) with an accompanying musty earthy funk that pairs well with the fruit. There is a drying, tannic oaky flavor on the finish. I don't taste any bourbon, per se, but I get a slightly boozy, caramel note every now and again.

M-The feel is light to medium body with a little wave of fine carbonation that fades on the palate.

O-This is another quality brew from CS. I rank this as more sour and a touch less complex than the best CS offerings, but there is plenty to enjoy here. Those looking for a bourbon bomb should look elsewhere, but I think the barrel flavors are well-executed in their restraint. All in all, a nice summer brew.

Appearance - Deep burnt orange. Small white head. Not much after a while.

Smell - Whiskey and some fruitiness. Peach, but I don't know that I'd pick it out independent of the label. Some alcohol. Vanilla and some caramel malt.

Overall - Complex beer. Not much of the saison back there, but the barrel is fascinating.

Appearance: Pours a lovely orange color honey color with less than a finger of white head that settles to a nice layer atop the glass. Spectacular lacing and retention. A wall of froth sticks to the side of the glass like a suction cup. 4.75/5

Smell: Juicy peaches, vanilla-y oak and hay/straw, rounded out by a dash of lacto and young, musty funk. The funk is very very subtle, and acts as a nice, soft accent to the aroma. The citrus juiciness is quite enticing, and practically triggers a salivating response. Notes of lemon zest too. 4.75/5

Taste: Really lovely and flavorful tart and juicy citrus upfront rounded out by barrel character and subtle funk. The lemon zest is more pronounced on the palate than it was in the nose. The peach/lemon combo hits you nice on the front of the tongue with a tartness that is lively, but not pucker-inducing. Then hay/straw on the midpalate, followed by oak and earthy lacto/brett in the finish. Has a nice lemony-peach brett flavored linger that is not intense, but sticks around nicely. The lingering flavor reminds me of a much more subtle and less tart, peach-infused L'Brett D'or. I really like how flavorful and juicy this brew is without being overly "intense" or wrecking the palate with harsh or extreme flavors. The complexities here are masterfully integrated, and the light funky character works well. 4.75/5

Mouthfeel: Light-medium bodied, low carbonation. Has a little zesty kick for being a saison, but it is not remotely pucker-inducingly tart. Juicy mouthfeel. This drinks like a delicious, fermented lemonade. 4/5

Overall: Another knock out sour from Crooked Stave, who is absolutely on fire right now. I enjoyed the base beer thoroughly, but this barrel treatment is a truly remarkable improvement. Seek this one out while you still can.

Had at The Festival in portland.

Served from a 375ml bottle into a Cooked Stave Tulip.

Appearance- Hazy orange with virtually no head or lacing.

Mouthfeel- Medium carbonation and mild tartness. Super easy drinking. Only 7% which is nice for a barrel aged beer.

Overall- This is phenomenal. I'm a Crooked Stave fanboy and this is one of the reasons why.

A - Cloudy dull medium orange with a few white bubbles that form a small film on top.

T - Lots of Peach here which is very nice, then some whiskey, wood-oakiness, tons and tons of layers keep hitting you. Very complex.

O - Peach and complex. Lot of layer and depth. A very good beer.

cellar reserve stuff, thanks to drlovemd83 for sharing this one with us from his epic stash. this pours a burnt orange cloudy color, with a short off white head, lazy looking, thicker, and enticing. the nose is crazy, like fresh caramel corn, toasted and buttery, with some sour hints, but this is much more mellow than the chardonnay version was. light lemon in the taste, with the sweetness of the caramel popcorn, butterscotch and bright. I really don't get a lot of peach, but I do get a lot of whiskey, oaky and summery I suppose, with some of the higher order alcohols coming into play. the finish is tart, but I wouldn't say sour, but this has a lot more weight to it than some of the other versions, certainly less carbonation, and it lags just a little in the mouth until all the wildness comes in an wipes the palate clean at the end, its a really perfect ending to a very strange yet enjoyable beer. I think I would have liked to see more peach some through here, but that seems to be something most brewers struggle with. still, I love the complexity here, and am suspecting this one will age with the best of them.

Taste: Starts off with a big mouthful of delicious peaches. Then it transforms into a slightly spicy rye whiskey flavor. More soft earthiness. Peaches in the finish. Saison-like.

Overall: A delicious beer. There’s definitely room for improvement though. I’d like to see a greater concentration of flavors that work in tandem, a slightly higher carbonation, and maybe even the addition of actual peaches into the aging barrels.