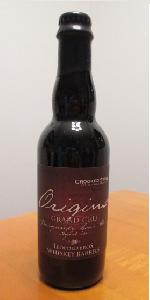 2013 vintage 375ml bottle into a snifter appears dark brown with a couple bubbles.

Nose is vinegar tang...acedic smelling and really nothing else.

Tastes sour with a sort of apple cider note and a bit of drying oak tannins.

Light in body and modestly carbonated. Its ok, I dont need to have it again.

Appearance is dark brown with hints of red, one inch of off white head, no retention, no lacing

Smell is a mixed bag of cherries and berries, brettanomyces, balsamic vinegar, vanilla, honey, and oak

Taste is tart at first and fades into a whiskey bite in the finish, no real sweetness to balance things out, does not change all that much as it warms, more vanilla mixes in with the tart but hard to identify any one fruit in the sourness, needs more complexity

Mouthfeel was a bit heavy, some booze came through, carbonation was too low, not much bite

Overall this was not Crooked Stave's finest showing, the whiskey barrel helped make this more unique but the sourness was a bit overshadowed and did not have as much fruit character as a lot of their others do

The last bottle of 2013 cellar reserve beers I was lucky enough to get my hands in thanks to the person I trustee for. I've been pretty hard on this series, most were mediocre but this one tastes better right off the bat. Appearance is dark red, almost brown, short head. Aroma is sweet, not any whiskey barrel that I detect but a nice aroma almost like a 25 year old balsamic. Flavor is sweet, sour, woody, nice. This is probably the best beer from the 2013 cellar reserve series.

375 mL bottle poured into a snifter.

Appearance - Deep reddish brown body. A few bubbles, but not much of a head. Thin collar.

Overall - I love the bourbon barrel in this. Really adds a nice dimension.

Pour is dark hazy brown with virtually no head. Nose is quite nutty, light roast, tart cherry, and a hint of butterscotch (doesn't seem like diacetyl). Taste also has a fair bit of nuttiness, much more cherry but less tart and sour than the nose would have lead you to believe. Body is light, fairly dry, gentle carbonation. A touch of barrel comes in towards the finish with a subtle sourness. Whiskey doesn't really make much of a presence.

A - Dark brown in colour and only very slightly translucent around the edges; otherwise opaque. Thin layer of cream coloured head.

S - Sour vinegar-like aroma with some cherry coming through along with a bready sweetness and a very light whiskey presence.

this is special juice right here, its all the glory of normal origins, a world class burgundy sour with tons of cherry notes and lactic tartness, combined with leopold whiskey, some of the better stuff in Colorado. a little haze to the still looking deep ruby liquid, small tan head doesn't last. nose is less sour than the regular origins, the barrel has clearly mellowed this some. the acid is less too, but the richness is ramped right up. the cherries now take on a booze soaked property that seems fitting, and the oak from the barrel has put a little vanilla sweetness into a very tart beer, refining it beautifully. it tastes as sour as ever, but the acidity is cut, necessarily I think. the whiskey seems the right choice for this beer, which was already brimming with complexity, its now even more layered. crooked stave can really do no wrong by me, and when they do right, it looks something like this. a complete winner here, there should release this again in the future. more drinkable that regular origins too because of reduced acidity. I love everything about this beer, wish I could get my hands on some more.

A: Poured a ruddy maroon color with a thin head that didn't hang on very long, but left a ring of off white head on the surface.

T: Initial acidic sting backed with a combo of red cherries. A dark fruit component in the background with a nice Earthiness frm the barrel. A very trace amount of bourbon on this shines a bit towards the end. The finish is tart, dry...

M: Medium bodied, a tad low in carbonation, but very tart/sour with a lot of texture and tartness

O: Well done. The barrel was not overpowering and complimented the beer very well.

Thanks to Nick for the chance to try this.

Poured a mahogany hazy color with about one finger of khaki tan head that dissipated rather quickly. Some sporadic spots of lacing along the sides of the glass. Minimal retention.

As soon as I opened the glass, the whiskey smell came pouring out. Once I actually got to the smell after watching the pour, though, I got sour cherries, black cherry, Jim Beam, Bottle Caps candy, vanilla, root beer and black licorice.

Tasted similar to the nose as I’d expect, but not quite as good. Could definitely taste the whiskey. Also sour cherries, Bottle Caps or Sweet Tarts candy, black cherry, vanilla and faint root beer. Might be my first whiskey barrel-aged beer and still not sure I like it. I think I do.

I enjoyed this beer very much. Would definitely have it again.

A - Pours a opaque ark cola brown with a few very light tan bubbles that move to the edges.

bottle from 2013 cellar reserve membership. enjoyed from a crooked stave 2012 zwanze taster. big thanks to my trustee DenverBeerDrinker.

a - brew poured a burgandy maroon with a thin head that didn't hang out, but left a ring of off white head on the surface.

o - overall, extremely impressive. the whiskey blends so nicely with the beer that i wouldn't know it was there if you didn't tell me. it adds a really nice compliment to the sour. worth checking out if you get the chance.

S - The nose is full of red wine and a dark tannin presence from the burgundy barrels. There is also dark cherry, light cinnamon, peach and a light booze presence

T - Really tart with lots of red wine up front. You can tell this was in a burgundy barrel with the big red wine and tannin presence. Really tart and lots of balsamic vinegar on the finish

M - Light body with good carbonation near the end. Definitely has some zip that remains in the finish as well

375ml bottle poured into HF stemmed glass. Thanks Bill (forgetfu) for sending this.

A- Pours a dark brownish color with slight reddish gold hue to it and some translucency around the edges. A thin layer of off-white bubbly head forms that recedes fairly quickly leaving behind some very light spotty, layered lacing. Fairly carbonatad at first, but dies down.

T- Vinegar, raisins, grapes, port, finishes with more vinegar, plums, sweet black cherries, currants, and decent sourness. Fairly complex, a nice sourness on the finish but just a little bit too much vinegar up front for my preference.

M- Medium bodied to maybe a little bit on the light side, fairly low carbonation but enough that it doesn't drink completely flat, finishes with a light sour vinegar presence.

O- This was a nice sour however it is far from my favorite sour that I've had. There was a nice complexity with a lot of flavors coming out however I felt like the vinegar presence was a little bit too dominant and hid the other flavors of the beer a little bit too much. Definitely worth trying but probably not something that I'll be seeking out right away again.

huge thanks to ablackshear for this extra!

Taste: high end of moderate tartness(7 out of 10) mixing with a hint of bourbon sweetness. Simliar to the nose; bing cherries, currants, and red raspberries. Deep wet oak notes and a subtle earthy funk. Hint of brown sugar and caramel from the malt profile. As the beer warms... sweet bourbon notes intensify, more wet and earthy oak, and even vanilla notes begin to show; adding even more to the compexity of the sour without overdoing it. The beer is both tart and sweet in the finish! It is a medley of tart fruits and sweet bourbon; just magnificent!

Overall: This is a wonderful sour by crooked stave. It hard to believe that no fruit was used to brew this beer, the cherry and berry flavors are fantastic. When the beer hint the right temperature the beer is super complex. Really dig what crooked stave did here. Great use of Leopold whiskey barrels! This is a new favorite crooked stave offering to date!

Shipped into town this week by our trustee. Poured at around 65F into a Hill Farmstead tulip. I hope Shaun doesn't care.

A - Dark pour that proves to be more of a deep, translucent brown than anything else. Good lacing retention. Looks quite appealing, even for a dark sour.

S - Deep notes of the tart yeasts smashed into the sweet malts. For what it is, I can't complain too much. It is fairly appealing. It smells more like a purposefully infected porter. Notes of cherries come through atop the malts.

T - Much of what I find on the aroma. Reminiscent of the unintentionally infected porters and stouts that I've actually liked, but without the roasted flavors. The cherries in the aroma are more of a mix of cherries and dark, dried fruits in the flavor. Sweet malts are there the whole way. Tartness is there as well. Whiskey barrel shows some mild wood in the background, which goes well with the rest of the flavors.

M - Medium, pushing a full medium. What I wan to see in the style.

O - Better than Tart of Darkness b2. Better than a lot of the infected stouts that I like, but were unintentional. Better than most dark sours I've had as well. I personally enjoy infected stouts, but not so much dark non-fruited sours. This managed to surprise me. Keep it up CS, please keep it up.

A: Pours a deep brown with hints of ruby; very appealing color. Light only passes through the very edges of the glass. A slow to moderate pour yields a one finger, cream head that slowly recedes, leaving a barely present foam ring atop the glass. Mild lacing on the way down.

S: The aroma immediately lets you know this one is going to be tart. The nose leans more to the sour than funk. Dark fruits; cherries, plums, and raisins. There is also an interesting caramel aroma lingering in the background.

T: This is tart, a bit funky, and finishes dry, leaving your mouth watering. Tart fruits up front; plums was the first thing that came to mind. Finishes dry and the funk kicks in at the very back end. Picking up some wood in there as well.

M: I would call this a medium bodied sour. Carbonation is in the low to moderate range for the style.

O: This is the first Crooked Stave beer I've had the pleasure of enjoying and I am left supremely impressed. A fantastic sour. Highly recommended if you have the opportunity to try this one.