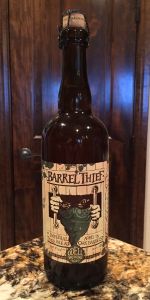 Poured into a Sierra Nevada balloon after sitting out of the fridge for ~20 minutes or so.


Look - A deep hazy orange with a pure white head. Quite hazy with tiny bubbles streaming up.

Smell - The immediate scent of toasty vanilla, smoke, and oranges. The hops take a slight backseat to the oak barrel features of the beer, but they blend together decently.

Taste - Similar to the scent - vanilla, toasted nuts, and citrus/orange-esque hops. A bitter aftertaste. There's a rather smooth transition from the oak barrel features to the DIPA taste. I'd say the IPA is much more present in this beer, with the lovely orange taste that dominates latter half of the sip.

Feel - Carbonation is like that of west coast IPA. Not much else to say.

Overall - This is my second barrel aged IPA, with the first being Burton Baton (aged in bourbon casks). Barrel Thief doesn't have the bourbon features that BB had, but it's a great and unique beer in its own right. The only other comparison is Barrel Aged Big Foot, which is a very bold beer in my opinion.

I think my only issue is that this is a nice IPA with something extra. At $15+ a bottle, though, I did expect something a bit more. The toasted nutty vanilla is nice, but oddly enough, as you keep drinking this beer it tastes more and more like a DIPA with some alcohol burn. I liked it more and more as it heated up, but I can't see why this wouldn't come in a 4 pack like Burton Baton for $16-$17 as opposed to a bomber for $15.

Pours a hazy, light orange, with a one finger head and loose, foamy cling. Smell is oak, citrusy hops- grapefruit, orange, some malt and yeast, some resiny hops, a little vanilla, a hint of maple. Taste leads with the oak, citrusy hops- grapefruit, lemon, some malt and yeast, less resiny hops than the nose, a little caramel and vanilla. Smooth, almost creamy, good level of carbonation, hops linger nicely.

Liked this beer better than I scored it, although I'm above the average. Loved the oak, it's well balanced between the oak and the hops, very enjoyable to drink. Well worth a purchase.

Smell: WHOA - HUUUUUUUGE oak aromas as soon as I pull the cork. Stick my nose in the glass after the pour and get whapped upside the head by an oak baseball bat. And then - a hop aroma peeks through, like a lurker on a message board making a singular post.

Taste: oak is definitely present, and there's also a nutty flavor, but as it warms, the citrusy hops come forward - and we're approaching beer nerdvana. Excellent.

Feel: for a beer that weighs in at 9.4% ABV, the feel is relatively light.

Overall: the heavy oak aromas were a bit much, but as it warmed, this beer became a wonderful flavor adventure. Well done by an excellent brewer.

Thanks @hophound
This one brings forth some oak barrel, apricot, and hops in the nose. But the flavor comes through with apricot, wood, hops and a hint of almond. Very interesting. There's a little beat of alcohol "warmth" to the finish. Yay!

Pours a deep lightly hazed gold, two fingers of off white creamy head, that settle to a good film with nice lacing

Aroma is big on mango, a nice amount of oak follows and becomes the predominant note as it breathes, and more whiskey-like as it warms

Flavor is boozier than I expected, sweet with a sneaky lash of bitterness on the back end. Oak shows up big, hop flavor a bit more subdued than in the aroma, but similar tropical note.

Rich, full body, as expected for the style, liven up with appropriate carbonation level

While I love my DIPAs, I'm not always in the biggest hurry to try barrel aged ones. The oak and tropical hoppiness have an excellent point/counterpoint going on here. Reminiscent of Odells Woodcut, only more drinkable and less raw in the wood, and elegantly hopped.

I am liking this beer! Depth, breadth, and complexity do their thing and create a very enjoyable, nicely balanced heavy-duty IPA. Woody. Hoppy. Flavorful. It's all here, my friends! A relative rarity, I suppose, but well worth hunting down and exploring, especially if you're a crazed hop-head looking for something delivering a subtle edge and difference from the hordes of offerings from other breweries. Mighty fine...

Poured into a Westy chalice a very nice cloudy dark golden orange color, very nice carbonation, with a one-finger plus creamy/thick off-white head, which leaves some very nice thick small islands in the glass, and some thick sticky lacing. The nose is hoppy, kinda malty, with a very slight oakyness, some citrus. The taste is very very nice (I like this one), hoppy, malty, citrusy, with a very nice oak/bourbon note, that also has some cherry notes in there, slight vanilla. Medium body, with a very nice bitter/dry finish. ABV is hidden very well. Overall a very tasty brew. Quite different than alot of other DIPAs out there, I believe. I really like the bourbon/oak notes, not too pushy. If you see it, pick it up.

Let me start by saying that Myrcenary is a favorite of mine, and I had very high hopes for this one.

Pours the typical "DIPA Amber" with orange highlights. Head is creamy, off-white, lacing looks like continents on a globe.

Smell is not especially impressive, mostly barrel, with a background of malts and a teeny touch of sharp fruity/grassy hoppiness.

Mouthfeel is average for a DIPA, with a good amount of carbonation that makes the flavors seem to pop as they hit the tongue and pass along without leaving a lot behind.

Overall a decent brew, but the barrel aging seems to have muted the hop flavors to the point that it is more of a detraction than a boon. Interesting beer, but nothing fabulous.