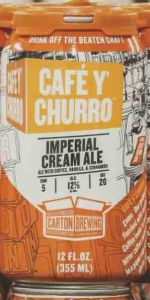 Pours a foggy, burnt orange body topped with just over a finger of fluffy, white foam; solid head retention leaves islands of creamy cap along with a moderate, frothy collar and a generous spatter of spotty lacing spread around the walls of the glass.

Aroma features creamy vanilla amplifying the sturdy cream ale base as it absorbs fresh diner coffee with a touch of cinnamon grazing for nuance; a clean composition for a vivid and evocative bouquet.

Taste shows a hint of vanilla and fresh coffee bean as cinnamon edges coffee roast on the mid-palate, building to a residual presence of sweet corn and bready malt lingering past the finish.

Mouthfeel offers a medium body with moderate-low, fluffy carbonation dispersing creamy textures into a roasty tingle over the mid-palate; a level silky character maintains, with a subtle grit progressing into a cleaner finish.

Maybe the most direct of the series, these adjuncts flow seamlessly into the base Regular Coffee scheme, presenting a coherent image of cinnamon infusion countering a naturally sweet and creamy underbelly while maintaining the taut, balanced drinkability paraamount in the style.

Alrighty, we’ve landed at our final destination in this horizontal tasting, the #1 rated Cream Ale. This one is definitely the most low key in terms of adjuncts of all the ones I’ve sampled this weekend, but maybe its beauty lies in its simplicity. Let’s see if it’s worth of such high praise

Well the cinnamon definitely gives this one more of a presence in the nose, but it’s equally smoothed out by the vanilla. I’m picking up on aromas of creamy coffee, earthy cinnamon, coriander, French vanilla, doughy malt, honey, and light toffee

A medium full body pairs with gentle carbonation, resulting in a smooth beer. Finishes mostly dry and dries even more over time because of the cinnamon. Probably the most drinkable of the series because of this

This was one hell of a ride through adjuncted Cream Ales to get me through a blizzard! This one and Coffee & Pavlova (kiwi + strawberry) were definitely the frontrunners of the series. Worthy of the title, and I'm excited to try more variants in the future. In the meantime, I've had enough of the style this weekend, time to get to some other beers I picked up from Carton

Appearance - The beer poured a golden color with visible carbonation and a white head.

Smell - Cinnamon and some coffee are noted in the nose. It was obvious that this beer had some spice.

Taste - Oh my! Regular Coffee is obvious, but the spice of the cinnamon sparkles. With the hint of cinnamon, it really created the idea of drinking a churro. The cinnamon is not overdone or a mess of spices. I believe the beer could benefit from a bit more cinnamon spice. The coffee profile was not overshadowed by the adjuncts., especially in the finish.

Mouthfeel - The body was so smooth, even with fairly aggressive carbonation.

Overall - I think I like regular coffee the best. However, this is my favorite variant.

Thick, slightly hazy orange with a .5" inch, excellent lacing throughout. Nose is sweet cream, light malts, touch of vanilla, but didn't catch any cinnamon. Taste follows, with rich milk and cream notes, rounded malts, small amount of hop bitterness to even it out. Whiff of cinnamon on the finish, but very slight for me. Feel is rich and creamy, with no hint of the 12% ABV. A remarkably smooth beer, with the only knock being the elusive cinnamon.

A- A slightly hazy copper with a small white head.

S- Cinnamon, some coffee, caramel, some vanilla. Smells like a churro with some coffee.

O- Wow, Carton nailed it with the churro flavor. Very easy to drink.

Aroma has notes of coffee, vanilla, light cream notes and a lovely bouquet of cinnamon. The cinnamon is just delicious.

Taste follows the nose with notes of coffee and vanilla up front all interspersed with some lovely cinnamon notes that linger through to the finish. Its sweet, but not overly so.

Feel is light, not exactly crisp, but its clean. Semi-dry finish.

Overall, this continues the series unique take on the cream ale style. The cinnamon and vanilla in this one are outstanding though. Definitely my favorite example of the coffee series I've had.

Wow, this is quite the interesting one. Looks still as cider in the glass. It's rare that coffee works well in a pale ale, but this is one of those times. The sugary, toasty churro character comes through nicely to balance things out. Almost like a coffee barleywine, but also kinda reminds me of Pumpking?

Dark amber brew with an off-white head. Minimal production and OK retention. Body is lively; despite the activity and deep color, it's perfectly transparent.

Coffee, cinnamon, and vanilla on the nose. Decadent and rich; sweet and inviting. Just a bit of a cream soda note going on.

Flavor follows: sweet, creamy, and smooth. Cinnamon provides a large portion of the flavor accents, and the vanilla blends smoothly with cream and coffee notes. Less bite than other amber coffee ales (or coffee cream ales). Quite a dessert beer.

Creamy body, very smooth and drinkable. No sense of the high ABV until you notice the heat building in your throat.

Pours a golden color with a half finger of quickly disappearing head. The nose is cinnamon, coffee, vanilla and some caramel. The taste follows the nose vanilla, cinnamon and coffee with some bitterness on the finish. Low carbonation, smooth and easy to drink with a creamy mouthfeel. The 12% is not noticeable.

Transparent copper with a finger and a half of foam. Head is off-white in color and is well-retained. Aroma is cinnamon, vanilla bean, medium-roast, medium-bodied coffee and nutty, earthy, caramely malts. Sweetness right up front with just a sliver of coffee bitterness bringing it back to balance. Flavor profile is cinnamon, vanilla bean, medium-roast, fruity bodied coffee and nutty, earthy, caramely malts. Sweetness starts and closes out the flavor profile, with a light bitterness from the coffee striking a modest balance in the center. Alcohol is well hidden in the flavor profile, which is rather surprising considering the 12% ABV. Mouth feel is lightly crisp, with a velvety, medium-thick consistency beyond it. Overall, sugary sweet with a good hit of coffee. Balances leans heavily towards the 'dessert' side, which is to say - overall, this thing is sweet. The fact that the alcohol is well masked boosts the rating here just slightly.

Can you be in Cuba and Mexico at the same time? With this beer you can. Tastes of a sweet cortalito but you enjoy that with a freshly fried churro from Mexico City. If you like coffee and desserts this will win you over.

Fantastic presentation of flavors here in an interesting beer. The coffee, cinnamon, and vanilla all work well together and the light touch of sweetness adds a lot of character. It's strange to have a coffee beer where there's no interference from dark roasted malts but it's nice. It smells like walking into an Italian coffee shop. Overall a fantastic experience. Every flavor is on perfect display. yb

Pours rusty gold with a white head and impressive clarity.

The nose is straight churro. Spot-on cinnamon dessert. Nutty coffee in the background.

The taste is similar. A nice level of sweetness delivers cinnamon-sugar, vanilla cookie, and extremely subtle, well-integrated booze (almost a spiced rum-like character). There's some coffee complexity, but the dominant taste is churro.

The mouthfeel is medium+. Slick yet smooth.

Pours a 5 on the SRM color index, nice foamy head which quickly dissipated. Smells like caramel, vanilla, burnt sugar,Taste is a lot going on,"regular coffee", vanilla,cinnamon,pie crust- Feels very well balanced, one caveat is at 12% and a sweet cream ale it is-almost cloyingly sweet,not quite. goes down smooth, nice carbonation. Overall an very good example(if not complicated)of a cream ale !!

Truly one of Carton’s platinum offerings...a joy to sniff, demands your thirst...tonight I popped a can from the 2019 offering that’s been sitting in the netherregions of my fridge, hidden in plain sight for a night like tonight, the world is a shitpainness...I need to calm my soul, and this lusciousness is mine to open...pours hazy honeygold, quick dissipating head...in my teku it’s smooth liquid caramel, cool sweet cream...perfectly beer-sweet, the creme lightness cuts the sugar like the cool side of the pillow...claiming this as my 2nd favorite Carton brew, second only to 2018’s All Orange Everything, the Other Half collab that must see a rerun after this pancovid nightmare is well behind us...great brewery that produces positiveness for this s great state while producing confident-attitude beers every week...if only a second can was lurking back there behind the pickles...

pours a golden hue, fairly clear. head retention isnt great. smells like a sweet pastry. caramel. sweet body isnt cloying or overwhelming, but provides a nice backdrop for the milk sugar flavor and coffee. finish is not bitter at all, but has a distinct residual crystal sweetness. cinnamon as well. pretty tasty stuff.

Look is a golden honey and poured with a finger of off white head.

Aroma is big cinnamon sugar, vanilla and lots of coffee.

Feel is smooth, creamy and full. Carb is moderate to low.

Overall it’s honestly one of the best cream stouts I’ve had. Huge flavors and a punch of abv combined with a 12 oz can equals awesome.

Impressed overall at all 5 of these beers; didn't realize they were 12%. The ABV is well masked.

#1 St. Kitts Coffee
Awesome Cocnut Flavor. Rum is sweet and smooth. Awesome beer. Heavy and light at the same time.
#2 Regukar Coffee
The standard. Coffee and lactose are a natural match in this. Very SMooth. This one also feels fuller than the others.
#3 Irish Coffee
Surprise here. Minty and spicy. The mint actually works pretty well in this unlike many other mint beer disasters I've had. Nutmeg is also apparent and gives a kick to the coffe flavors.
#4 Kaffee und Kuchen
Cherry is a downer, but the almond keeps it at bay.
#5 Cafe Y Churro
Disappointed in this since it was rated so high. Felt like it needs mroe of the vanilla and cinnamon.

Overall these were a great experience. Would love to get some of the St. Kitts in the summer.

Thanks Mike for hooking me up with this. 12oz can poured into a tulip.

Pours a crystal clear apple-juice looking body with a small white fizzy head that reduces to nothing.

Aromas are malty and sweet, vanilla and caramel, lots of coffee and perhaps a hint of cinnamon. On the tongue is smooth creamy vanilla-caramel, cream soda, light cinnamon, vanilla ice cream. Barely any alcohol detected for 12%, it's amazing how smooth this is for 12%.

I really enjoyed this beer, tons of flavor and easy to drink for 12%. Dangerous!

Pours a beautiful golden hue with minimal head. Not much to the nose at first, but it grows as you let it warm op. Coffe, cinnamon sugar, vanilla. Big flavors! Loads of vanilla, a bit on the sweet side. Some coffee mid swallow, nice cinnamon aftertaste. ABV is pretty well hidden. Thick and syrupy, creamy and full bodied. Overall this is a fun desert beer to sip on, I look forward to next year's batch!

Cafe Y Churro from Carton Brewing Company
Beer rating: 97 out of 100 with 241 ratings