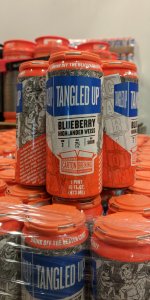 Notes: Like all great love, the love of a sour blueberry is a lifelong exploration of spectrum ends: sometimes reveled, at times ignored, and regularly re-engaged the next summer when paths happen to cross. As farming and fictitious flavors progress in the modern age, the joy of that one special berry, among those couple sours scattered through a quart of otherwise sweet-ish fruit, is far less dependable and all the more poignant. In Tangled Up, we take a wheated base to a decently sour point and layer sweet blueberry, till it sits comfortably on both sides of the teeter-totter of this metaphor. Drink Tangled Up, and explore each point of view.
View: Beers | Place Reviews
Reviews: 5 | Ratings: 14 | Log in to view all ratings and sort

Adding the robust dark berries of blueberries to an otherwise bright and lighter beer has Carton brewers all tangled up in variety, complexity and charm when turning their Berlinerweiss into something slightly more than traditional ale.

So Tangled UP pours with no evidence of its berry secrets within as it decants with a mildly hazy chrome golden look, As a voluminous froth amasses the glass, hints of blueberry rise above the otherwise cidery, winey and citursy sourness underneath. The faint sweetness of wafer, taffy and sourdough greets the tongue with a malty wheaten upstart.

Then as the ale rolls across the tongue, its sweetness is cast aside and the brunt of sourness begins its acidic dominance, leading with green apple, lime, lemon, white grape and gooseberry. The gentle nature of blueberries eventually get lost in its taste as the late palate is dryly of cereal, tartness and a brief waft of damp burlap with an earthy touch in the end.

Medium bodied and considerably full compared to classic Berlinerweiss, the lumbering nature of wheat malt on the finish prevents the dryness, effervescence and brightness that had dubbed the style as the "champagne of the north". But the blueberries add a subtle intrigue that has the palate wanting a little more.

16 oz. can purchased at brewery, poured into Aslin anniversary glass. I assume blueberries were picked on Maggie's farm.

O: Good blueberry Berliner and I look forward to next year's "Do Drink Twice, It's Alright."

Pours a very light fog copper with a finger of khaki foam. More head is attainable, but retention is poor regardless. Aroma is blueberry - big, with lactic sour bite and crusty biscuity, toasty malts. Flavor profile is big blueberry, with crusty, biscuity, bready, nutty malts. It has a big lactic bite in the back on the palate, and then lets blueberry notes linger on the tongue for a while. Mouth feel is effervescent, with a medium thickness. Overall, big blueberry, but a tasty sour.

Pours an amber color. Fairly clear. The head is one finger, slightly off white, frothy, and has decent retention. No lacing on the glass.
The nose is really nice and tart blueberry. The tartness lingers in my nose.
Taste - It's actually mellow for a second, then the tartness kicks in. After it gets almost smooth and a slight sweetness on the backside.
The body is actually quite light, but not watery at all. No real alcohol feel in spite of it being a 7% beer.
Damn fun drinking and delicious sour. One slight problem with it, in a way, it's almost too easy to drink. I could easily pound these on a hot day, and get into trouble fast. I'd enjoy it though.

Sour done well, Buy this. Thrilled to be its first review
a) Pours a berry tinged inky golden body that sprouts and supports a decent finger of head and lasting lace (at brewer).
s) Blueberry, yes, but mainly a lively vein of tart marbling your senses.
t) Sour coming dominant. A tinge / whiff of blue berry, green fruit, yeast, pickle.
f) complex, intensely sour as you'd like it to be, no halfway here.
o) Buy this and share the sour as a 1-of-a-kind delight.

Tangled Up from Carton Brewing Company
Beer rating: 88 out of 100 with 14 ratings