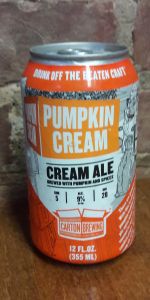 Notes: There are pumpkin based flavors that are not pumpkin pie. With this in mind we set out to make an autumnal beer in the pumpkin tradition that wasn't simply a spiced beer using the usual pie-spice blend. Looking to enhance the pumpkin's flavors, we roasted its meat touched with orange oil, pink peppercorns and candied ginger. We added this to the mash of our high gravity cream ale recipe. The result is a rich bodied ale, its creaminess teased by the peppercorns' heat, that presents the flavors of pumpkin while notes of orange zest and a sweet ginger bite tame the vegetal dryness. Drink Pumpkin Cream Ale because there are spices on the shelf behind the nutmeg.

Can into a snifter appears clear golden copper in color with a white cap that fades leaving spotty lace.

Aroma of ginger and some grainy sweetness slightly corn-like with a touch of herbs and mineral character. It has a fruitiness to it as it breathes.

Taste is fruity with lots of pepper character, herbal, slightly vegetal with faint pumpkin sorta spiciness across the back. There is at times a bit of caramelized sweetness but it fades quick to the contrasting bitterness.

Medium in body with modest carbonation. It sure is different for a pumpkin beer, I just didnt get it. The flavors present dont work that well together but I suppose if you love pepper this might be your thing?

Pours a hazy reddish orange in color with a bit of just off white head that quickly disappears. Aroma is spicy peppercorn, ginger, and a touch of alcohol. Taste is a repeat of the aroma with a subtle slightly sweet carmalized note (which must be the roasted pumpkin touted in the label). Then I get some spicy peppercorn and ginger that segue into a touch of alcohol heat in the finish. Decent mouthfeel with medium+ body and moderate carbonation. Overall a decent beer and a unique take on a pumpkin beer but it's just not for me.

Thanks to SammyJaxxx for this one from NBS BIF#4. Full disclosure, I don't like pumpkin, or pumpkin pie spices. The fact that this is a Cream Ale, instead of one of the more typical darker styles is intriguing. 12oz can poured into 10oz goblet. Poured a cloudy yellow/gold color with about a half-inch of white head that had good retention and lacing.

The aroma was a bit sweet, with some noticeable but not overpowering spices. On the tongue, I found the spices overpowering, but the co-worker that sampled it said that it worked nicely. he said it was the best pumpkin beer he's had. The sweetness of the base beer did work in favor of the overall brew, but spices are spices, and a little goes a long way.

The body was smooth and creamy, with a generally clean finish, but those spices lingered too long for my tastes. For me, drinkability was no good, but that's on me not the beer. Overall, this is a nice beer, a good beer, a beer worth your time, if you're into this type of thing, but not my jam at all. I wonder if the base beer is available, because I'd really like to try it.

Thanks to SammyJaxxx again.
Pours is orange to copper in hue. 2 fingers of head rise and slowly retreat to a half inch or so of milky latte-like foam. Color is white. Little lacing.
Smell is so subtle. The malty base comes through with slight caramel, some round yam like notes, and a lite touch of spice along the lines of nutmeg, pepper, and cinnamon.
Taste is a blend of flavors. None overwhelming the others. Some sweet, roasted pumpkin-butternut squash notes, lite molasses, ever so gentle spice notes hint at pepper and cinnamon, and a creamy sweetness. Also, a hint of alcohol as it warms. But i must note how these all play really well together.
Mouthfeel is down right creamy.
Overall, I like this a lot. I could see some people who wish for more of the "traditional" spice components to be increased. I would prefer it the way it is.

A honey-orange pour opens with a slighy floral nose, moderate ginger/peppercorn spiciness, and at times, heavy ethanol. Very little sweetness, and wouldn't guess pumpkin. I get a bunch of butterscotch and grainy sweetness punctuated with peppery spasms. Pumpkin is nuanced and vegetal, if noticeable. Creamy feel, but strong overbite of ethanol reduces the overall sensuality. Overall, a very crusty pie with loads of KGB spiked pumpkin filling. The bite of the peppercorn and ginger amplifies the alcohol, which drowns out an otherwise nuanced pumpkin flavor.

12 oz can dated 9/30/16 and poured into Kane tulip glass. Bottom of can (always read the bottom of Carton cans) says allow to warm to 46 degrees, so that should be nearly an hour.

S: Dominated more by the lactic acid cream ale than anything else. You pick up some of the pepper and ginger and maybe a touch of citrus.

T: Definitely appreciate the difference between this and most other pumpkin beers (which really are pumpkin-pie spice beers). You get a general creaminess throughout the taste, light notes of pumpkin, a definite peppery finish along with a separate zing from the ginger. Didn't really pick up the citrus.

F: Medium body, light to medium carbonation, good construction. Balance is kinda neither here nor there as the pepper/zingy finish is a bit out of control. Good drinker despite high ABV.

O: Definitely correct to categorize this as a cream ale rather than a pumpkin beer.

Pours a very hazy orangey straw color with a finger of head. The nose has some seasonal spices but more coriander than anything. The flavor also has corriander and definitely pepper. The finish is dry.

I'm not sure what I expected but it was definitely not this.

Canned 9/29/2016. Poured into Carton teku glass. It pours a cloudy, golden-orange color with one finger of milk-white head and lacing with good retention. It smells of sweet malt, pumpkin, nutmeg, and a whiff of citrus. It has a nice flavor of pumpkin, nutmeg, ginger, pepper, bready malt, and a touch of hoppy bitterness at the finish. It is really thick, creamy, and chewy with moderate carbonation, and the 9% ABV is noticeable and potent. Overall, this is a really enjoyable and fun Autumn beer. Like Carton's other cream ales, this one is nicely-bodied and has lots of flavor and character. Very well done!

From notes. Hand pump at Pour House in westmont, NJ.

Pours a very hazy pale golden orange color that's more straw/yellow-hued with a two finger frothy white head that slowly settles into a lasting cap/ring. Surprisingly good retention for high ABV and serving style with streaks of soapy lacing clinging to the glass. Color is much lighter than expected for a pumpkin beer.

Strong lactic cream presence in the aroma along with pumpkin pie filling, very prominent zesty citrus and peppery spice. Lots of coriander and white pepper along with some ginger and sweet orange peel. Pumpkin is in there but pretty subtle with only faint autumnal spice notes. Most of the pumpkin beer character is overpowered by the citrus, pepper and lactose. Smells more like a cream-witbier hybrid.

Full bodied with creamy texture and a crisp, peppery bite that lingers over the lactic creaminess, sweet citrus and pumpkin into a dry finish. Definitely has more of a cream ale flavor profile than a traditional pumpkin beer. Wouldn't have even guessed that pumpkin was in there if I didn't know. Strong lactose sweetness/creaminess followed by pepper, coriander and ginger. Underneath, there's some bready yeast with prominent citrus zest in the finish, especially orange pith. . Little to no autumnal spices that are typically associated with the style. Still, this is a pretty flavorful beer with nice cream ale characteristics. I was just expecting a bit more pumpkin.

This ain't your daddy's Genesee! Though pro'lly twice the octane, this is a pleasant, smooth drink. Lite on aroma, it laces nicely and has a subtle sweetness and fruity finish. OK, I'm done being homogenous in my review. Short story is, if you want an easy drinking beer that will kick your ass.... Or just appreciate a well-done example of the variety, I say you won't do better.

Served on tap in a Palm tulip at the Cloverleaf Tavern.

Carton's Pumpkin Cream Ale pours an opaque tangerine, with almost two fingers of white foam capping the beer. Head retention is pretty good, but lacing is spotty. The nose has a strong candied orange peel aroma, supplemented by a light spiciness. The flavor profile is still orange peel forward, but it's more well balanced. The peppercorns make some more noise here than in the nose, and a light pumpkin note is just appreciable. The body has a bit of sturdiness to it, but it is paired with a lively carbonation that keeps things light. Carton's Pumpkin Cream Ale stands well apart from most traditional pumpkin ales, yet manages to have a tasty, fall inspired flavor.

a: hazy orange, but a vibrant orange. nice eggshell colored head which there wasn't an abundance of.

s: I was expecting spices but instead I got a lot of malt sweetness.

t: much better than I had anticipated, herbal notes along with orange peel upfront. The pumpkin is subdued in this one, some light pumpkin flavors meld well with the sweetness of this beer.

m: smooth and easy drinking cream ale. flavors are never overbearing in the mouth. despite the 9% abv it does not give any hints toward that much alcohol.

o: I was really impressed with this offering. Most pumpkin beers tend to be BIG on the pumpkin AND BIG on the spice, this was neither and I thoroughly enjoyed it. Had no clue of what the ABV was until I came home and researched it. I was expecting around 5% but it's 9!!! I found it to be more of a cream ale than a pumpkin ale but I guess it's still both?

Pumpkin Cream Ale from Carton Brewing Company
Beer rating: 85 out of 100 with 78 ratings