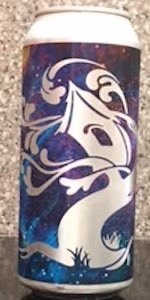 Notes: Galactic Storm is an Imperial IPA that pushes the concept of our Citra and Simcoe based Double IPA 'Storm' family! Featuring an enormous dry hop, it features hops we have spent years learning to understand and select from our friends out in the Pacific Northwest. It's been a fun beer as a concept, and challenges your palate with hop oil saturated notes of tropical fruit, citrus, and overripe guava. A sipper, be sure to let it warm and express itself in the glass. Enjoy!
View: More Beers | Place Reviews
Recent ratings and reviews. | Log in to view more ratings + sorting options.

L -- Super hazy muted golden orange with a finger of dense white head produced with moderate pour. Good retention and lacing
S -- Mango puree, guava, lychee, orange sherbert, hints of booze and pine
T -- Citrus and green leafiness dominate. I like this one compared to many of TH's heavily hopped higher ABV offerings since the hop character has some personality and isn't this weird hop extract syrup that they've been pumping out more and more of
F -- Less fluffy and more chalky than usual. Still has that nice fly-off-the-palate bitterness
O -- It's a good one, but no attributes particularly stand out. But boy is it smoooooth

Brewers Notes: Galactic Storm is an Imperial IPA that pushes the concept of our Citra and Simcoe based Double IPA 'Storm' family! Featuring an enormous dry hop, it features hops we have spent years learning to understand and select from our friends out in the Pacific Northwest. It's been a fun beer as a concept, and challenges your palate with hop oil saturated notes of tropical fruit, citrus, and overripe guava. A sipper, be sure to let it warm and express itself in the glass. Enjoy!

t: a little bit muted compared to the aroma. mango, flat pineapple, and caramel upfront. melon, kiwi, and peach juice behind that. melon seems to dominate the backend making this feel a lot lighter than the abv

o: this is an example of why i think NEDIPA should be a BA category. balance of tropical and sweet, yet not syrupy and not heavy in the mouth. this drinks extremely easy for an 8.8% beer

Notes via stream of consciousness: Remind me again, what this is? It's a double IPA at 8.8% ABV with Citra and Simcoe. Interestingly, the label states that they've spent years learning to understand these hops whereas I find Citra and Simcoe to be pretty straightforward. They do morph a bit when you mix them with certain other hops but I think of these two as hops that are don't really stray too far. It's poured a murky golden body beneath a two finger thick head of rocky white foam. The aroma is citrusy with tangerine, grapefruit, and lemon and a bit of earthiness over a lightly sweetish and grainy malt base. On to the taste... it's distinctly citrusy, again with tangerine, grapefruit and lemon, but also with mango, passionfruit, apple, and a bit of dark berry (blackberry, elderberry, currant). A moderate to median bitterness balances it and along with some acidic "hop burn" it finishes dry with some citrusy and berry-like fruitiness lingering. The head has held up well so far and there are basically solid sheets of lacing left behind although there are also thicker rings of lace embedded in them. In the mouth it's medium bodied but a little "fluffy" due to all of the extra proteins, and gently crisp with a delicately bristling, fine-bubbled, moderate carbonation. I had no idea what to expect from Galactic Storm but I'm pretty impressed. I think it's one of the better Treehouse beers but that's just my opinion.
Review #7,984

This one's a bit paler than usual. Nose is pear, sweet apple, a foamy hop bite, and unripened pineapple. Very aromatic. Beer opens melon, cantaloupe, pear, and pineapple. Rather unique flavor profile. Heavy on the melon in the middle. Some aspects of strawberry and jicama as well. End is citrus and more pineapple. Solid. Body is light to medium with moderate to ample carbonation. Prickly and lively on the palate and goes down aggressive with a lingering, messy aftertaste.

I like the melon presence here though the feel is a bit un-Tree House like. A touch aggressive and could be fluffier.

Reviewed by orcrist_cleaver from New York