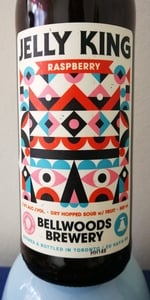 Pours purple with a little bit of pink foam.

Smell is all about the raspberries with huge, jammy notes and both tart and sweet hints. A little bit of lime rounds it out. I almost couldn't stop smelling it.

Taste is absolute perfection when it comes to raspberry sours. Tart with a bit of acidity, but it really is all about the raspberries with just a little bit of grassiness and a splash of lime. Phenomenal.

Bottle: Poured a reddish color ale with a large bubbly head with limited retention and not much lacing. Aroma of tart raspberry notes with some light acidic notes is enticing. Taste is a great mix of tart raspberry notes with light lactic acid notes and limited acidity. Body is about average with good carbonation. Enjoyable beer with just the right amount of complexity and good drinkability.

Basically slightly beery fruit juice. A little sweetness from the fruit, but that immediately gives way to the crazy sharp edged tartness of the raspberries. Big raspberry nose, too. Reminds me of rote grutze, a German/northern European fruit pudding. Tasty, but you gotta be into fruit, coz like a lot of stuff out of this place, the beer is good, but it's a background player.

A jewel in the crown of this series. Floral raspberry, lighter than beat colour with pink foam head. Tart up front with creamy cushioning, Well made.

Appearance: Had a pinky of head that laced well but sadly did not stick around. The body is an opaque, dark cherry red so not much more to glean here.

Smell; Raspberry through and through. I think I might be catching a slight touch of biscuit malt, but it's mostly buried behind waves of potent raspberry that did not require warming. It's good for raspberry wine, but there isn't a lot of beer here.

Taste: It's a sour raspberry bomb, which I guess I shouldn't be surprised that this is the case. There is a touch of biscuit malt at the start and near the end that tries and fails to reign in the beer. It's a raspberry bomb though.

Mouthfeel: It has crescendo transitioning, in that it starts with a milder raspberry note with some malt, and it builds and builds to a raspberry explosion climax that the malt seems to be desperately trying to reign in. Sadly, said climax stops just a bit too far for my liking as the sourness overwhelms. It also leaves a bit of a filmy note of sour raspberry as a result. Carbonation though is solid though.

Drinkability: Light to medium bodied, which is an odd spot to be in here. It's just too potent, as the sour pang is like drinking those kinds of wine that must have food to work. Settles down well enough though.

Final Thoughts: This beer needs to be cut with food. I thankfully had access to a plate of hummus while I had this one, but even it didn't have enough garlic to cut this monster down properly and reign it in. Of the three "Jelly King's" I've tried, this one I found to be the weakest of the bunch. I mean, I figure they wanted the malt to reign in the sour in some way, but it's presence isn't there. It's still a great beer, but it needs to calm down.

Jelly King - Raspberry from Bellwoods Brewery
Beer rating: 91 out of 100 with 10 ratings