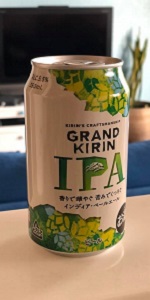 Looks like a deeper coloured Japanese beer (caramel, very clear) with a cm deep white head that lingers right to the end.

Taste is easy drinking but with a touch of dry hopping and a good balance between malt sweetness and hop bitterness. Head and shoulders above the rest of the rice lagers out there but definitely not a West Coast IPA.

Nice mouthfeel but a bit light.

The best Kirin beer I've tried. Not a punchy IPA but better than other large Japanese brewers attempts at mass brewed pale ales.

Bought for 275 yen from a supermarket in Miyazaki, and for only a few yen more than a Kirin Super Dry, and a real craft beer over here is much more so it's worth it over here.

L- Quite a deep amber, crystal clear, pours with 1Cm white head.
S- Quite bright, piquant fruity, reminds me of apple.
T- Quite dry on the front, then roasty-toasty, quite solid malts and that builds into a notably hoppy-dry finish on the palate that leads to me lightly coughing a couple of times - that's my first sip of beer today and this is pretty hops-forward! Way more so than a typical mass-market Japanese beer. I don't detect fruit, just a more trad British IPA style with pretty serious+ hopping in it.
F- This would make a good summer beer during Japan's often blazing hot summers. It is meaty yet notably well hopped so refreshing. It feels more than it's 5.5%, maybe say 6.2-6.5% to me,
O- I think this is the best of the 'Grand Kirin' beers I've tried. It's certainly the hoppiest. Now I'm not a born IPA/hop-head but find this a well put together beer ... but at a price, esp. when bought as an import! £7.99/350ml can bought from Ichiba, London W12. BB: 01/2020. It's a decent beer, though I won't be buying it again at that price.

Bright clear orange body with a white head staying a long time on top, we can see through bubbles going up.
Nose is very shy, malty, a bit hoppy not very aromatic.
Taste is quite on point, malty, a bit roasted with a medium bitterness, not sweet at all.
Nice sparkling mouthfeel.

I didn't know what to expect but this is actually better than I thought.

Kirin comes up with something new craft every year under the name Grand Kirin. I had a few from them and they were all okay. This time their IPA is also crafted quite well: looks and smells proper enough and tastes okay too, nice and hoppy, though on the less aggressive side, somewhat more subtle than your regular IPA would be. A bit thinner I would say overall.
But still, if you take into consideration that this is one of the biggest makers in Japan, you must appreciate that they manage to come out with such a craft beer line. Also, it is quite close to what craft breweries produce (perhaps only that passionate depth is missing that makes craft beers so outstanding and unique), otherwise they are as good as they should be. Seems that they have learned a good lession from American IPAs, now I am fascinated to see what they will come up next in 2018.

Drinking it again in 2018. It became a regular and not a special edition anymore, like in earlier times. Kirin has this and their IPA available year-round to show its presence on the faint craft beer market in Japan. The beer is an English IPA, not a US one, for it being brewed with round and sweet/flowery English hops and sweet malts. I'm loving its English hop intensity, but if I wanted a standard go-to IPA, it would be an American, not like this. Yes, Kirin is a conservative concern.

350ml Can from Family Mart, Tokyo (¥297):
This one was definitely a better than expected IPA from Kirin , particularly when you consider they are more at home putting out cheap pale lagers but this one wasn't too bad at all. It was quite a fresh beer with a liveliness about it that went well with a hop bitterness & citrus that featured from the start. It was definitely an easy beer to drink as well, going down nicely thanks to the balance with a subtle tropical sweetness leveling out the bitterness & some nice malts towards the end too; this is one that I'd have again.

Pours a clear golden with a big head that fades fairly quickly to a medium head. Lots of carbonation. Smell is citrus and pine, and a little yeast.

Taste is mild, definitely hoppy, but definitely not very hoppy. If this was a pale ale, it would be pretty good -- as an IPA, it's a little on the mild side. Still not bad.

Mouthfeel is smooth, not too dry, not too sticky. Overall, not a bad beer.