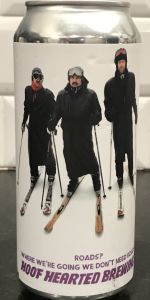 Notes: This is heavy-duty, Doc.

The only libation known to be more dangerous than stealing plutonium off Libyan nationalists, this brain-melting DIPA skirts all convention in the name of exploratory endeavors. 1.21 Gigawatts of Bingo Juice driven 88 mph to full dryness. Enigma and Citra act kindly in concert with that sweet, smooth-grove Cashmere.

You want a Pepsi, pal, you're gonna have to pay for it.

A: Pours a milky murky pale to medium bright yellow in color with moderate amounts of fine active visible carbonation rising along the edges of the glass and faint pale golden yellow + straw yellow colored highlights. The beer has a two finger tall dense sudsy foamy white head that slowly reduces to a large patch of slightly mottled thin film covering the entire surface of the beer and a medium thick ring at the edges of the glass. Moderate to significant amounts of lacing are observed.

O: Easy to drink with well hidden alcohol and a very pleasantly soft/fluffy mouthfeel. Enjoyable with a really successful combonation of hop flavors and aromas. I could easily have a couple of these and love the references to Back to the Future on the can (and in the beer name).

16 oz can poured into a pub-style pint.

Overall
The hop combination is delicious but hard to describe, sort of like tropical burnt weed.

Notes via stream of consciousness: Another beer distributed by Twelve Percent? Well I trust Brian's taste so this'll probably be good. AND it includes Enigma, Citra, and Cashmere hops, so there's that. It's poured a muddy, kind of yellow-brown or yellow-brass color beneath an inch or so of dense off-white foam. It's super yeasty/protein-laden for a double IPA but we'll see how that works out. The aroma is a touch perfume-like, similar to gooseberry/white wine, and fairly resinous. It's interesting and I can say that I've definitely never smelled a beer exactly like this. On to the flavor... yeah, that gooseberry flavor is still there with a lot of what seems like pine and/or cedar, as well as tangerine which leaps forward. There's a little more tropical character to it (pineapple, grapefruit, mango) although nothing really stands out, except that it's got a hint of what I'm thinking seems like coconut. It's like a tropical cocktail with a splash of Sauvignon Blanc added and some woody spiciness. That's interesting! I'm not sure that I'm personally fond of it, but it's definitely holding my interest for right now. I'm getting a lot of hop bite out of it, a lot of acidity, and maybe that's what's giving me that woody spiciness. Or not. That confuses me a little on the bitterness as well, but I don't think there's really all that much there in the end - this is kind of a double New England style IPA. It finishes dry with a lot of hop acids and spiciness lingering. The mouth feel is nice as it's got a lot of extra proteins to it, and although I don't like the appearance of cloudy beers I can accept that as a trade-off. It's medium bodied but it seems fuller, and it's crisp but then somewhat creamy and smooth across the palate and down the hatch. In the end the head held up just OK, but the lacing was pretty good - I'm not quite sure of how to score that. So to sum up, I've enjoyed this beer but I'm not sure it's really for me - it might be fore you though! I feel it was well brewed, and I really liked that it's so unique. In fact if the brewers asked me how to improve it I'd say to just leave it as it is.
Review #6,934

16oz can. Poured out a hazy, golden orange color with a small, white head of foam. It smelled of pineapple, grapefruit and orange peel. Sweet tropical fruit taste with toasted caramel and a sharp bitterness.