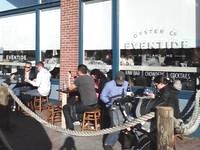 Reviewed by ManapuaMan from Massachusetts

4.39/5  rDev -0.2%
vibe: 4 | quality: 4.75 | service: 4 | selection: 4.25 | food: 5
The lobster roll and the buttermilk chicken bun were outrageous. Best sandwiches my wife and I ever had. Un-fucking-real. I had a pint of Lunch and she had a bottle of Allagash White. World class cooking with a great curated tap list and solid bottle list. A must. Got real crowded as we were leaving around 6:30. Thought about that lobster roll all night. Nothing like it.
Oct 30, 2016
Rated: 4.29 by CayseyW from Connecticut

4.23/5  rDev -3.9%
vibe: 4.75 | quality: 4.25 | service: 4.5 | selection: 3.5 | food: 4.75
Located near Hampton Inn and Sebago, this is a classic oyster bar - nice stone bar with an oyster display cutting the bar in half. Airy room with lots of natural light from the windows. Window rails and a few tables surround the bar. About 10 different types of oysters and 6 local draft beers. Service is what you expect in a quality restaurant, friendly and knowledgeable. The beers I had were fresh. Nothing better in town for great oysters and good beer.
May 14, 2016

Reviewed by SpoiledInVT from Vermont

4.44/5  rDev +0.9%
Found ourselves lingering suspiciously out front at opening time, again. Witz and I for Sunday eats before the 5 state hop back south and west I’m so not looking forward to. But first this, right above the hotel on the street adjacent in that little strip there. Almost too obvious but I took a rec from someone in the know...

Boxy room with a quarter of the space given to kitchenings. Beige sand pebbled concrete slab bar with a wood panel base and a hollowed giant chunk of rock on the corner where oysters live with marker sticks keeping the turf fair. Seating for 10 at the bar (7 on the stretch and 3 around the bend). A round stainless steel tower on the bar, with glassware stacked behind it and bitters and fixings to the other side. Barback holds and ornately framed mirror on center, and a trio of boxings mounted vertically to each side displaying booze. Bottled beer selections run the length atop, booze tiered on a wood piece below with glassware dangling from the underside and countered below.

Walls in two tone blue, one skyish but not, the other a paler shade of. Large framed prints on the far side of oyster shells detailed and so very different (Winter Point, Kumamoto, & Wild Belon). Framed pic of William Buroughs found in the walls during renovations and maps displayed. Large horizontal black board 4 x 6 listing 15 oysters, Maine & away, and draft selections, specials, lunch, pie, and brunch & happy hour hours. Dark wood floors and white pressed tin ceiling with exposed ductwork. Drop wide pan lamps across the room and some mounted wall lamp pieces to the rear. Seating for nearly a dozen on the counter space in the large front wall of glass windows, and a handful of tables on the other side.

6 taps, a mix of local heroes (Bunker Boondock Scotch Ale, Allagash White, Oxbow Noel), a craft away (DogFish Head 90 Minute IPA), and a pair of imports (Delirium Noel, Murphy’s Stout). I drank the Allagash White, it was one of those kinds of mornings.

A return with Phil phour months later found the DogFishHead 90 & Murphy’s Stout still on, and the others having shifted slightly (Bunker Brown Ale, Allagash Tripel, Oxbow Grizacca) or more (Banded Horn Jolly Woodsman). I opted for the Oxbox, yo; it’s a lovely saison.

And yes, there will be food, I mean, that’s why I’m still in Maine. Started with the New England clam chowder (salt pork, potato, & a baby biscuit) and then the lobster roll with the perennial house favorite brown butter vinaigrette, served on a wee roll so so soft. Sooooo soft. Last time out, we deserted with the hot chocolate of madness. It was like melted chocolate, it had great viscosity. I think the sign read “not your mama’s hot chocolate” or something like that. If not, it should have. This time out, there are Moon Pies in a case on the bar. I would like one or all of them, please, but I will refrain.

Service is pleasant and attentive. Nice comfortable place. Good tunes. I caught a good live version of ‘Going to California’, some Radiohead play, and whatever that Iron & wine song playing is, well I should find that song. We rolled in at opening, the place filled in around us. I dig.

Reviewed by morebeergood from Massachusetts

4.3/5  rDev -2.3%
vibe: 4 | quality: 4.5 | service: 4.25 | selection: 4.25 | food: 4.25
On our recent trip to Portland, my family stopped here for some mid-afternoon oysters. The space inside was very modern looking, but they have 5 tables outside in front, which were available so that's where we sat. Service was really nice. Our waitress was friendly and quick and recommended her favorite oysters, so we got a dozen. My wife had wine, but I had to go with beer. They have a really good selection for an oyster bar. Lots of local choices. I went with the Bunker Brewing Coffee IPA. Not the best pairing, but a tasty beer. Prices were on the high side for oysters (dozen =$27), but you pay for quality. Eventide was a nice afternoon pit stop on our food & drink tour of Portland.
May 07, 2013
Eventide Oyster Co. in Portland, ME
Place rating: 4.4 out of 5 with 15 ratings