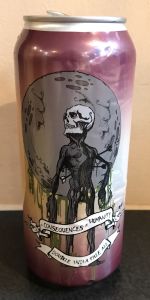 Really enjoyed this beer. I was worried it would be all oranges but that is pretty understated. Overall, a really nice hazy dipa.
L - very nice hazy, murky yellow
S - not too much, maybe some yeast and orange, like a little orange zest on bread
T - very pleasant, slightly sweet orange. Some of what seems like orange rind on the aftertaste
F - super smooth dipa, creamy
O - fun drink, orange not overwhelming but present. Only weak spot is the smell, not much there

Was on a bit of a binge while cooking. Moved from a blonde ale to this. Cooking with some spice, this one had the nice hop bite to cut back the heat. Not overpowering or overly bitter hops. Creamy, thicker mouthfeel. Tasty concoction. Though I did not contemplate the consequences of humanity, I did say a little prayer for the pig that sacrificed itself for my homemade pozole. He was a tasty little bugger.

Poured into a Seattle Beer Week pint glass. Pours a hazy golden amber with a fine one finger white head with great retention and thick lacing. Aroma of pale malt, citrus hops, orange and grapefruit, a lot of green onion, so much that I initially wondered if I had not washed the glass well enough, but remembered I hadn't cut onions in days, so it had to be the hops. A bit of dankness. An odd profile. Flavor is pale, neutral malt, citrus hops, orange, lemon and grapefruit rind, a little dank vegetation. A little onion, but not nearly as much as the aroma. Finishes with citrus rind hops and herbal hop bud, almost like biting into one. Light to medium bodied with light creaminess and good, peppery carbonation. I'm a little on the fence with this one. The malt body is a bit light for my taste (although it fits with the NE style of IPA), but the hops really show their character with lots of orange and mixed citrus flavors as well as leafy hop bitterness, which is nice and approaches a fresh hop in flavor. Although the malt is not hefty enough to cover the ABV, this still drinks smoothly as if it were a pale ale. An interesting unfiltered looking, herbal IPA. Glad I tried it, but maybe my tastes are locally sourced to NW style IPAs now. I did like the Allegory Of Gluttony & Lust from these guys a lot and look forward to trying their other offerings.

Big aroma of herbs and grapefruit.

The herbs are again strong up front in the taste, with a prickly, peppery spiciness to them. Less grapefruit-forward than the nose, although there is still a hint of that type of grapefruit pith bitterness. Actually sort of light and fruity orange juice on the backend with a relatively clean aftertaste.

Relatively light bodied for the style, with a prickly feel.

Despite the herbal spiciness this is a pleasant, fairly light tasting DIPA.