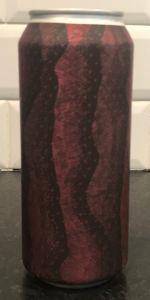 Notes: The aggregation of millions of tiny reverberating sounds, is anything but unheard. The resinous noise of choice is the beautiful fabric of our humanity. For the answer we all seek may be found, when we are guided by the harmonious array of our voices. 100% of the profits from the sale of this beer go to the ACLU and their Campaign for Smart Justice. Double dry-hopped with hand-select Citra, Comet and Cascade, and dosed with Enigma and Vic Secret. Fight for what’s right. Vote for your champions. Don’t ever stop.
View: Beers | Place Reviews
Reviews: 2 | Ratings: 7 | Log in to view all ratings and sort

A: Pours a milky murky pale golden yellow in color with moderate amounts of fine active visible carbonation rising along the edges of the glass and moderate bright yellow + lemon yellow + bright orange + pale orange + apricot colored highlights. The beer has a three finger tall dense creamy sudsy foamy white head that slowly reduces to a handful of small patches of medium thick film surrounded by a large patch of thin film covering the remainder of the surface of the beer and a medium thick ring at the edges of the glass. Significant amounts of lacing are observed.

T: Upfront there is a light to moderate flavors of biscuit + pale + oat malts with a light amount of sugary sweetness. That is followed by slightly stronger than moderate flavors of citrus/grapefruit zest + citrus/grapefruit + citrus/lime + tropical/papaya + herbal + pine hops which impart a light amount of bitterness which fades away fairly quickly leaving lingering moderate citrus + herbal hop flavors.

O: Easy to drink with well hidden alcohol and a decently soft/fluffy mouthfeel. Enjoyable with a bit of an NEIPA mouthfeel and appearance though with more of a traditional American IPA hop profile. I could have a couple of these.

While I find Burial to be masters of the modern IPA, this one misses the mark for me; it's drinkable but a bit off-putting. Not one I'll seek out again.

People Power from Burial Beer Co.
Beer rating: 4.03 out of 5 with 7 ratings