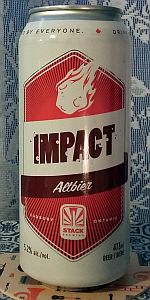 473 ml can served cold into a pint glass. Purchased from the LCBO for $2.95 CDN. First time seeing this Sudbury Brewery in stores this far south.

Appearance - Dark ruddy amber colored beer. Minimal head and it dissipates in seconds. No lacing to speak of either.

Smell - Earthy, toasted grains, some subtle caramel notes, a little hoppy. Pretty much what you should be expecting out of a good altbier.

Taste - Middling bitterness, earthy again, with more subtle sweetness than many in the style.Caramel and coarse grain flavors abound. This is quite good.

Mouthfeel - Medium-light body, carbonation is slightly lower than average. Finish is less dry than some, which works for me. A little more watery than some as well, but again it works pretty good.

Overall - Glad to try Impact Altbier from Stack Brewing; a fine altbier with plenty of flavors and hits all the notes I'm looking for. I'm thinking based on this beer alone, that they'd also do a pretty good Oktoberfest.

473 mL can from the LCBO; no dating info. Served slightly chilled.

Pours a translucent, hazy copper colour with amber highlights, topped off with an inch of light beige-coloured froth that only lasts about 90 seconds before dissipating entirely. A thin, soapy collar remains; no lacing, however. Toffee, caramel and biscuity, grainy, lightly toasted malts comprise the bulk of the aroma, with additional notes of prune/plum, nuts and some earthy, leafy hops.

A respectable German-style brown ale - the flavour profile follows the nose. Toasted grains, along with some bready, biscuity malts, nicely complement the sweet notes of caramel and molasses that follow. Mildly fruity mid-sip - I'm mostly getting plum and maybe a bit of fig - with subtly leafy, earthy hop flavours rounding out the back end nicely. Aftertaste includes some nutty sweetness that fades over the next few seconds, leaving the palate feeling off-dry. Relatively light in body, with moderate carbonation levels that continuously prickle the palate lightly. Not exactly crisp, but not really soft, either - this one's texture falls in the frothy no-man's land in between.

Final Grade: 3.73, a B grade. Stack's Impact Altbier is a solid example of this oft-overlooked style, though like most alts it's not exactly a head-turner. This is a highly quaffable, malt-forward brown ale that I could see myself returning to in the future. Comparing it to a geological bolide event is probably a bit much, but stylistically I have no real complaints about Impact - give 'er a go if it sounds interesting to you.

Look: The beer has a copper body, an amber leg and a thin white head, which disappeared quickly. At the beginning of the tasting, the bubbles resulting from the carbonation are visible.

Smell: The nose is floral. It is dominated by the malt, which hints at a nice sweetness. The warmth one can smell is a hint of toasty taste.

Taste: The beer has an exquisite malt profile. It is reminiscent of caramel. Afterwards, it shifted to notes of toasted and grainger breads. The notes of caramel were in the background in the finale in order to balance the hops' taste, which were a little peppery.

Feel: Light-bodied beer with a slight trace of pepper in the finale. The finish is clean and dry, but there was hopefully no astringency. The carbonation can be felt a little bit at the beginning of the tasting.

Overall: This is a very refreshing beer that is very much to style. Its ABV clocks in at 5.2%, which is 0.3% under the tolerated limit. The only reservation I have is with the poor head retention.

Pours a nice copper colour, thin layer of head with some retention and sporadic lacing. Nose is loaded with musty caramel, earthy hops and toasted grains. Flavour has a nice caramel malt backbone with grainy bread, and some grassy and earthy hops that come through nicely. A nutty flavor is also present alongside a hint of bitter citrus rind on the finish. Smooth and dry mouthfeel. A solid altbier and certainly a welcome go-to addition to the local market, especially given the limited availability of the style.

Appearance: It has a nice hazy copper/amber color to it. It has a nice light beige head that dies down moderately and leaves some lacing.

Smell: The aromas definitely give out hints of bready/toasty malts, some nuttiness, light caramel, floral hops and a faint earthiness.

Taste: Like the aromas, it has some bready/toasty malts upfront, some nuttiness, light caramel notes, herbal hops and an earthy bitterness.

Impact from Stack Brewing
Beer rating: 84 out of 100 with 26 ratings