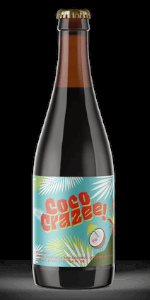 Appearance: Pours espresso brown with a film developing briefly and then fading away; vague spots of lacing are there if you look hard enough but there is also a film from the viscosity

Smell: The raw and toasted coconut tones waft above the rich, dark chocolate

Overall: Boil this down and serve it over vanilla ice cream; I can only take this in a very small quantity though I do like some coconut

Thanks, devoured by vermin, for the opportunity

This is a serious blast of coconut, but I thought it was delicous. It's think and smooth at the same time, and I really enjoyed drinking it at the brewery.

Love coconut? Then you'll love this Stout that was recently released at Other Half. It's not my favorite ingredient but most of their offerings have been pretty solid as of late and this was no exception. Full of coconut juice, sweetness, and toasted notes, this was a dream for someone from Hawaii or the like. As for me, I had to sip this slowly since it just a bit too intense for my tastes...

Pretty dark pour to this as the liquid was bordering on vanilla extract. A bit of tan head quickly formed and then faded away as this was headless throughout the rest of my time with it. Ditto for the lacing as that was practically nonexistent as well. The bottle said that this had raw coconut, coconut milk, and toasted coconut as they were all discernible in the nose and more so in the taste. There was a slight burn from how roasted this was while the silkiness came through in the taste and on the palate. Not sweet like coconut cream pie, this was more like a candy bar than that as it had more body to it than I would have first imagined.

This had all the booze that I pictured which made this feel quite warming and potent by the time I finished it off. One of these was enough to knock me out, but that was as much from a flavor overdose as a hit from the alcohol. Not one of Other Half's better bottled offerings but it's worth a go once as a dessert and nightcap...

Coco Crazee from Other Half Brewing Company - Brooklyn
Beer rating: 93 out of 100 with 16 ratings