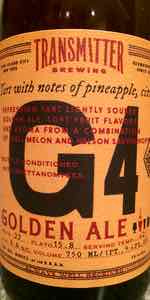 On tap in Brooklyn. Pours orange with fluffy white head and nice lacing. Aroma is of funky yeast, bready malt and wild berries. Body is medium and tangy. Taste is sour, tart, fruity, pale malt and some hops. Finish is long and tart. Nice refreshing brew.

Poured from a caged and corked 750ml bottle into a dogfish tulip glass.

Look is hazy golden with a big head that dissipates quickly.

Taste is more of that refreshing tart slightly slaty note.

L: Pours a very lively and clear gold color, on the darker side, with a pretty massive foamy head and good head retention. Very pretty beer.

S: Mildly tart with a touch of honey-like malt and sweet meaty tropical fruit. Some citrus and grassy hops with some moderate brett character.

Thoughts: Yet another good beer from Transmitter, though far from my favorite beer from them and far from a standard-bearer for hoppy wild ales.

Bottle was poured into a tulip glass.

Appearance: A one finger head was poured that reduced to a thin layer. It is a slightly hazy pale yellow orange color with good clarity and vision of tiny bubbles coming up through the glass.

Smell: Pineapple, tangerine, orange peel, bready, and pale malts. Some funk in there too.

Overall: Will have to admit that I liked this beer a lot. Will look for more of this in the future.

Bottle. Pours a hazy yellow with a standard, white head. Aroma is Bretty and fruity with some graininess. Flavor comes forth the the Brett-fruit flavor that is indeed somewhat reminiscent of pale, tropical fruits. Almost like overripe fruit. Really juicy but almost too mushy. Mildly funky. Medium bodied. Not very sour. Just a bit of tart but more funky-yeasty than tart, really. Overpriced, too. Paid too much for this.

Hazy, golden orange with a finger of head that dissipates over time and leaves very little lacing in my wine glass.

Smell is underwhelming. Definitely a little brett funk but not a lot, and a bit of hops come through.

Tastes nice- lots of citrus, kinda a citrus tartness plus a TINY TINY bit of brett funk plus some bitterness and earthy tones from the hops.

Mouthfeel is very nice- light body and well carbonated but not super prickly just bubbles. This isn't revolutionary but it's certainly very refreshing on a hot day like today, and pairs nicely with my pasta with peas and bacon, and also with this goat brie.

Overall: A nice, mild sour. Refreshing. Would be good to sip on a hot day. Very good, but nothing to rave about. I would gladly drink this again if I was in the mood; though there are better sours out there.

Picked this up from Eastern District in Greenpoint. First Transmitter brew I've tried.

Pours an amber golden color, with crazy amounts of head that subsides rather quickly.
Smells of lemons, fresh-cut grass, dirt, honey, maple syrup, pineapple, and maybe even a little coconut.
Taste is sort of grainy, with the tartness coming on early, but not in a way you'd expect. I get more lemon, a rich, sort of earthy malt, and sweet tropical fruit.
Carbonation is sort of overwhelming, to be honest. It almost makes it hard to appreciate some of the more subtle flavors.

I find it interesting that the G1-3 were just golden ales, yet the G4 is a "sour golden ale." The fact that this beer's tartness is fairly subtle, and Transmitter is fairly small, makes me wonder whether tartness was what the brewers actually intended. I'll have to ask them when I get there!

From 09/08/14 notes. Picked this up 2 days earlier at the brewery, 750ml bottle corked and caged poured into my Transmitter globe glass.

G4 from Transmitter Brewing
Beer rating: 89 out of 100 with 41 ratings