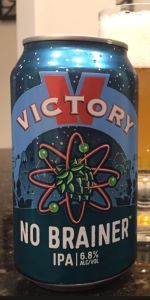 12oz can with best-by and pckg-on dates

This bad boy is filled with pils and carapils malts, those are coupled with a large variety of hops (mandarina, citra, centennial, and azacca). The brewmasters knew what they were doing here, it's like a Summit Saga with the pine dialed down and the fruit flavor turned up... In non-Minnesotan dialect: this is a top 95 percentile beer in every which way possible

Pours a relatively light yellow with a fluffy head into a pint glass. Aroma is subdued, primarily grassy notes. First taste on the palate is actually sort of malty, with some piney hops coming in with a metallic tasting finish. Mouthfeel is pleasant but a bit thin.

Overall it’s okay. It reminds me of something that would be a generic Costco IPA. It doesn’t have those deliciously vivid hop profile that other IPAs have.

From the can, it pours a lightly hazy yellow color with a nice white head that lasts and leaves lacing. In the nose, it is slightly piney, but I don't get a huge amount of scent. In the mouth, it is ever so slightly bitter, with tastes of lemon and other citrus.

-foggy yellow-orange can pour with a 1 cm foam cap.
The aroma is mostly tangerine and lemon. There is a hint of pine.
The flavor follows the nose. Citrus first, then pine and some strawberry sweetness.
The brew is lighter-bodied with low to moderate hop bitterness.

The beer is a hazy yellow with a decent head. On the nose, it is floral and fruity with honey like sweetness mixed in. On the palate a graham cracker like malt that is sweet. It is balanced just enough by hop bitterness. The hops are also bursting with floral and mango-citrus notes. The taste is very pleasing. The mouthfeel is full but but thick. It could use more carbonation, but is still good. Overall, this a a very good take on IPA.

F: rather light-bodied and verging upon sharp via its dryness, mildly medicinal alcohol, and pungent hop character; delicate amount of resinous, oily roundness in each sip

O: to me, it's yet another quintessentially-Victory, German-(bock/pils)-minded approach to an IPA, an execution which I have long enjoyed, but the expressions of which would unsurprisingly turn off contemporary (fruity, smoothie) IPA audiences... think of this more as a (mai)bock-strength German pils with a perhaps continental IPA angle (1724)

Bright "carapils" yellow with a solid 1/2 inch head of clotted white foam, nice lacing and excellent retention.
The aroma is clean and bright, lemons and green tea with a faint white sugar background but not aggressively hoppy or IPAish.
Flavor is on point with the aroma but with more enthusiasm. Thin for style and light on the tongue the flavor is off balance to the bitter hop side.
Not unpleasant but somehow disappointing. Some mild grain notes push through and there is some malt here... I think I tasted some ..... oh well. It's a bit better and more drinkable than I make it sound... maybe. Your results may vary.
The finish is long and dry, which makes me dive in for another swallow hoping I missed something.
Nope.
It lacks malt in flavor, body and character. Malt in beer is like fat in food. Both = FLAVOR. This ain't got no fat man.
It gets a little better as it warms but this no brainer is no Hop Devil my friends.

I got a can of this beer off Binnys single shelf from their Naperville, IL location. The beer poured a clear yellow with white head that is leaving a spotty lace. The scent had subtle bright citrus hop notes. The taste was nicely balanced and easy to drink with bitter citrus hop finish. The mouthfeel was lighter in body with good carbonation. Overall it is a decent beer.

I resemble that remark. I've been sitting here enjoying this AIPA instead of thinking about writing a review. The name of this ale must take over subliminally.

It is yellow and fizzy to start, and mostly clear. The aroma is subdued (too cold), but clean. The taste is not too bitter, not sweet at all. Extremely refreshing. I wish I had more than just this one can. Bogus dating on can - can't tell when it was made.

Recommended. It's been a while since I had any Victory brews, and as usual it is a favorable experience.

A: A very strong carbonation factor quickly paces through a translucent, dull orange colored body. A lot more clear then their Cloud Walker, which I previously enjoyed. Chalky white head is foamy, clumpy and slight at one-half inch inches but remained sturdy none the less. Big display of lace decorates the glass walls with thick, mulitple bands.

S: Wet tropical, peaches, pineapple that was very similar to their Cloudwalker, thou a bit toned down and without the big grassy bite. Green melon, breakfast fruitiness. Aroma doesn't stick around long.

M: Light carbonation, medium body, a bit dry and bitter on the tongue, slights the tongue.

O: A nice level of hop bitterness, some raw citrus and dry tropical hops, solid, but comes in as just another ipa filler when compared to their other successes (dirtwolf, cloudwalker, hop devil). Didn't seem bold nor unique enough to stand out to me or recommend. Moderate drinkability, hey no complaints if its in my hands, but would hardly seek out or invest in a six pack, a single is fine enough to enjoy. Things thin out a bit body wise on the finishing swallow. Moderate enjoyability, an 86 says it best for me.

Appearance – The beer pours a hazy yellow-amber color with a one finger head of puffy white foam. The head has a good level of retention, slowly fading over time to leave a bit of foamy lace on the sides of the glass.

Smell – The aroma of the brew is massive of a citrus smell mixed with lots of stone fruit and some tropical fruits. It is a big mix of tons of peach and apricot, some tangerine and orange as well as some mango and papaya. Along with these smells also comes a little bit of hay and bread, giving a very fruit forward and inviting smell overall.

Taste – The taste begins very different than one may anticipate from the nose. It begins with a cracker malt flavor that is mixed with a light amount of tangerine and peach sweetness. The taste is rather dry upfront, with a moderately stronger showing of some grapefruit hop and a bit of herb. As the taste moves forward it dries out even more, and at the same time, acquires higher levels of herbal hop as well as some pine and earth. With the loss of much of the sweet, the crisp base, and the hoppiness, one is left with a rather crisp and dank hop taste to linger on the tongue.

Mouthfeel – The body of the brew is lighter and more crisp with a carbonation level that is on the slightly higher side. For the mix of dryness and the dank hop tastes, the feel is great and makes for a nice crisp drinker.

Overall – A rather tasty brew overall that is lighter in malt nature, but big in hop flavor. Rather nice.

Pours a pale amber with off white head that leaves some decent lace.

Smells of flowers, citrus, and pine with some cereal grain malt.

Gold pour, medium white foamy head. Flavor's mild--there--but not in your face aggressive. This beer will not offend; it will not overjoy. It does moderate citrus hop bite in a pleasant, though largely unmemorable way.

Nose brings bright hops, floral grassy and a touch piney, with plenty of citrus and some stone fruit, orange, grapefruit, tangerine, light creamy base malt, a little grainy as well

Overall not bad, decent west coast style IPA, with a nice hop profile, seems like it has some age but plenty of time before the best by date

12 oz can. Enjoy by 10/18/20. Pours slightly hazy light yellow with a big rocky white head that retains well and laces the glass.

The aroma is very subdued - some malt and fruity hops.

The flavor is subdued as well - cracker malt with grassy hops. The mouthfeel is medium bodied with smooth carbonation.

Poured from 12oz can into standard pint glass.

T: Follows the nose closely with some herbal hop bitterness.

Had this from a can.
A: pours a straw yellow body, pretty transparent, with a white head with ok retention and lacing.
S: floral, sweet citrus rind smell with subtle lemongrass notes.
T: light, crisp sweet Citrus taste with some earthy notes; dry, lemongrass finish with some floral notes
M: medium bodied but crisp and refreshing
O:pretty solid drinking beer; definitely crushable. Solid taste and smell; love that it’s a refreshing, but not THAT sessionable IPA weighing in at 6.8%.

Brief watery, pale malt start. The hop is basic black pepper bitter. Lower carbonation. The finish is long and biting. Overall, this is a case of no mistakes but also no complexity. A fine introduction to the category.

CAN: 12 fl oz pull-tab. Verified to be before its "best before" date.

TASTE: Juicy Mandarin orange flavour sways this away from the herd, helping its hop profile stand out a bit. But the Centennial is barely present, bringing only simplistic floral character instead of the pine and resin you'd find in something like Bell's Brewing's Two Hearted.

Balanced, but ultimately it's lacking hop pungency and sufficient hop flavour for the intended style.

TEXTURE: Smooth, a bit dry but tolerably so, perfectly carbonated, medium-bodied. Certainly light and approachable for the style. Adequately soft.

This mouthfeel fails to accentuate specific flavours or to elevate the beer as a whole, despite being generally well executed.

OVERALL: It's a competent IPA from one of the best classic brewers in the business, but it doesn't commit enough either to its specialty hop (Mandarina Bavaria) or to its classic hops (who doesn't love Citra and Centennial?) to really excel as an IPA in the current crowded market. This brewery makes better IPAs themselves, and while its $10 per sixer price point is attractive, it's hard to imagine anyone in Virginia picking this over the aforementioned - or anyone not in Virginia picking this over their best local and regional expressions of the style, not to mention widely distributed examples of the style available at the same price or even cheaper (Elysian Space Dust, Lagunitas IPA, Deschutes' many expressions of the style, et al.).

In short, it's nice enough but I wouldn't buy it again as much as I know I'll enjoy casually drinking the rest of the sixer.

No Brainer from Victory Brewing Company - Downingtown
Beer rating: 84 out of 100 with 152 ratings