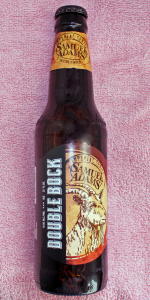 Rating from notes. Consumed November 2013. "Great looking bock with stellar aromas and a velvety palate, but I expected bolder flavours from this one. Still, worth trying IMO."

This is a strong brew from my recollection. I love the thick, malty syrup feel of it. I recall one night having consumed 3 and thought, "Uh oh...I forgot to have dinner..." but I was pleasantly full.
I miss this brew. Last I heard it was discontinued, but I saw a recent review so I am hopeful. I was overseas for 2 years and haven't had too much luck finding it here in San Antonio. Checked HEB, Specs, local liquor stores...no luck.
Is it still out there?

From notes 10/13/11: Pours a rich mahogany brown with a light tan, full head that leaves a tight coating of lace as it recedes. Rich and malty with a raisin sweetness in both the nose and mouth. It has an alcohol presence and bite that is much greater than expected from a 9.5% ABV. A good American version of the style.

Brothers, if I can suggest one beer you simply must try in your life...it is this one. I had the pleasure to down many a 4-pack and I appreciated every damn one of them. One of the most exceptional and boldest beers I've had the privileged to try. A word of advice, you will either hate this beer (it's not for the weak) or absolutely love it. It's Imperial Cousin isn't bad...but not the same.

Another reminder beer is subjective. I loved this beer. This is an intense malt driven punch to the senses. I get huge dried fruit, banana, caramel, toffee, toast and a slight warming finish. ABV is well hidden but still present. Haven't had a ton of doppelbocks so I am not totally sure as to how it stacks up stylistically but my taste buds like the beer presented. Highly recommended for fans of big malty beers (winter warmers, English barley wines, old ales, etc.)

Wow. I had heard this was the zenith of Sam Adams and boy howdy, it measures up. After a visit to the brewery I picked this up at a local bottle shop.

A: Dark reddish-brown with an everlasting head. Seriously, it stays in the glass for hours.
S: Crystal malt for days. Caramel, toffee, malt...you want to eat it.
T: Similar to the nose. Tons of caramel, toffee, dark sugar, yeast and malt.
M: Heavy but crazy drinkable.
O: This bock is one of the best I've ever had, easily one of the best for style. SA might miss the mark here and there for other styles and beers but this is exceptional. Damn near a perfect bock.

Beautiful ruby clear pour, but with a little too thin white head. Smells like a good German doppelbock! Malty sweet goodness with a hint of roastiness. Taste is similar, but a little too much heat. Good overall, but it with the classics so easily attainable, not my go to. Prost!

Clear red with a small amount of off white head that dissipates to nothing
Aroma is sweet malt, some dark fruit. A bit lacking for the ABV
Flavor is a bit bigger, but still lagging behind something like JA Saxonator. Toffee and caramel, some raisin and grape.
Balanced feel, a little bit boozy but nowhere near as much as the 9.5% would indicate.
Ultimately a good beer that would have been better at a lower ABV. For the size of it, ends up lacking a bit in flavor.

A: poured from a 22 oz bottle into a pint glass, orange brown with a large tan head that lingers leaving good lacing, cloudy

O: very interesting for a "big beer" that isn't a stout or a DIPA hop bomb

Overall- Nice doppelbock. Has a great balance of those sweet dark fruits, rich malts, and breadiness. Does truly taste like a meal in a glass. Hearty and warming.

Just re-released in the form of a couple 12 oz bottles in the newest "Adventures in Lager" mixed-12-pack, SA's doppelbock gets another chance to wow with its huge malty backbone and intense ABV. This is actually my first time with this beer, to be honest. Was never really interested in it enough to pick it up separately, but as part of this pack it makes a lot of sense.

Pours a deep brown with ruby/garnet tones hidden within. Head is towering and off-white with great, consistent lace as it dissipates to a single finger of foam. The beer has a translucent look; seems very lightly filtered. The color is dark though, so it's tough to tell if I can't see through it due to lack of filtration or if it's just a high SRM.

Nose is wonderful... redolent of earthy baking spice (cinnamon and nutmeg pop out immediately though neither is used in the beer as far as I'm aware), doughy yeast, brown bread, fig and molasses, this big German-style lager nevertheless doesn't seem to throw its weight around too much. Ethanol heat is kept to a surprising minimum here. I can only really detect warming alcohol notes if I inhale very deeply and intently. Mostly, I'm picking up brown sugar, bready qualities and spice. No esters are picked up at all. This seems very clean.

Flavor is rather rich with lots of similarities to crème brûlée, some toffee and cocoa along with the molasses and brown bread noted in the scent. Very little of the spice notes from the nose come through on the palate, but the earthy, dusty and vaguely-yeasty, doughy flavor seems to sit on the tongue throughout. Pretty nice, if sweet overall. Once again, kind of surprising that this is so strong considering its pretty approachable, if heavy and malty, palate.

Feel seems to sit on the heavier side of medium with moderately-low carbonation, which is pretty much to-style. It's been a surprisingly long time since I've had a traditional German doppelbock and this doesn't really feel quite like one, but it's still nice for what it is. Perhaps there's a reason they don't call this a "doppelbock" (or name it something that ends in '-ator', either!) other than ease of marketing, then. Regardless of whether it squarely fits in the stylistic category it's lumped into on here, one thing's for sure to my palate: this is a pretty damn good drink.

Pours from the bottle an opaque brown with a tan head that leaves plenty o' lacing.
The aroma is toffee, caramel and biscuit.
The taste follows. Toffee and bready sweetness up front, a little raisin and fig, a touch of spice (cinnamon perhaps?) and some boozy warmth.
Mouthfeel is medium and smooth.
Not at the level of the best German Dopples, but pretty darn good.

Taste, again, alcohol blast obliterates everything else. There's a massive caramel presence that keeps anything from being too prominent, there's some smoke, spice rack and citrus notes. Nothing in terms of hops, more bitter fruit and alcohol burn.

Worst beer of the Imperial Series.

16.9 ounce bottle poured into a stein

A: Pours a mahogany with a tan creamy looking head, lots of bubbles streaming up the side, light does come through giving the beer some lovely ruby colored edges, some lacing, some good head retention.

T: Dark fruits, burnt sugar, caramel, molasses, has a touch of honey in the middle, finish is roasted and sweet, some bitterness, aftertaste is sweet.

O: I know Sam Adams gets a lot of dislike but they can brew some really solid beers, including this one. Lots of flavor, aroma, nice appearance, creamy smooth mouthfeel, I really enjoyed this. I might pick up another for the cellar.

Caveat this is a review of a 2013 bottle

Poured from a 12 oz bottle into a snifter
A: murky brown in color very little head

T: caramel, fairly sweet, raisins, bready lots of residual sugar has a sour taste on the end and a little bit of an acidic taste

O: Well fuck...the beer is a lot better than. remember it tasted more like a scotch ale and sadness now it actually resembles a Doppelbock. Not sure about the slight acidic taste and sourness.

A - Cloudy rust brown, with a substantial light tan head and extensive lacing. The head and lacing are nice, but the body is a bit more muddy than I'd like.

S - Positive is the rich malt nose, but there is a slight chemical note, and the alcohol hit is significant.

T - Caramel and sticky bread sweetness, cut by a vegetal grassiness. The close has a hint of over-steeped tea, and acridness that undercuts what is otherwise a fairly pleasant drink.

M - There is a bit of stickiness, and certainly the alcohol and bitterness in the close helps clear it, but not completely.

O - This is close to a great doppelbock. Unfortunately, off notes undermine the delicious caramel and bread qualities. As a result, it seems they'd have been better dialing things back a touch and keeping tighter control.