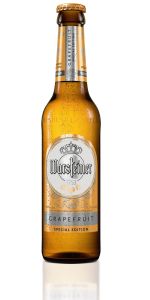 Disappointing. Pours a soapy, active head, but the beer is utterly flat and drinks like syrup. Very basic grapefruit nose and flavour. Just full on meh. Maybe an old can? Will try again and see what's what, but my initial impression is not good.

500ml can - strange to be having this one when there's about a foot of snow to be shoveled outside. More import agent inanity, I suppose.

This beer pours a clear, pale golden orange colour, with three fingers of puffy, loosely foamy, and mostly just fizzy bone-white head, which leaves a few instances of coral atoll lace around the glass as it quickly blows off.

The carbonation is quite active in its swirling and twirling frothiness, the body a so-so medium weight, and generally smooth, with the sugary nature of the citrus muzzling itself at this particular juncture. It finishes off-dry, the grapefruit soda essence lingering like the boss that it wants to be.

Overall - this is a serviceable enough version of the style, with the fruit side of the equation definitely not too sweet, as it comes across more like European lemonade. Refreshing, if a bit plain-seeming in its Teutonic earnestness, and obviously lacking in the preparatory warming that I need right about now.

This is like a Zima, a light beer and a glass of orange juice mixed together. Not bad, and actually quite refreshing, but just so un-beer like that it's almost like drinking a spiked seltzer. Surprising from a German brewing institution, it's basically like a 2.5% training beer. Way too sweet for me.

This pours a very light orange color, almost white. The head was white and frothy. Dissipated quickly.
The nose is mellow with the grapefruit. Very light nose.
The taste is light. Crisp. Grapefruit.
Feel is quite watery.
Overall refreshing. Light. Delicious.

APPEARANCE: pours a cloudy, light golden color with less than one-finger white head that quickly dissipated until just a ring of small bubbles remained around the rim of glass, a small amount of lacing on the glass, medium carbonation.

OVERALL: I really like Radler's and this one was just fine, the 2.5% ABV makes this a good choice after a workout, it could have had more carbonation and maybe the grapefruit was too dominant, I would have preferred more of a presence from the pilsner, it's not bad for the price but there might be better options available in my area.

Pours the color of Rose Gold and develops a head of 2 fingers which gradually recedes to a thin layer but not without leaving spirals of lace behind. 20% opaque.

Smells firstly of grapefruit candy, followed by some slight citrus pith and faint base grain.

Light bodied yet still leaves a little creaminess on the palate. Crisp finish. Not watery in the slightest.

Overall, I know this may not be up every beer drinker's alley, but for a Radler-type bier, with 2.5% alcohol, this makes a perfect poolside summer quencher. We will be buying more this coming season. It's not an Imperial Stout or a DIPA, but it is a damn tasty beer. I'll be buying tons more.

Looks like a strawberry blonde. Smells like a grapefruit soda and tastes like one too. That's ok if your in the mood for something sweet. Very low alcohol, no beer taste.

12oz bottle. Poured out a pale gold color with a small, slightly pinkish head of foam. It smelled of grapefruit, caramel and floral notes. Sweet fruitiness with a tart grapefruit bite.

Reviewing this for what it is and compared to other shandy beers this one is drinkable and enjoyable. Is sweeter than what I would prefer but is nicely balanced.

A thanks to the admiral of the canquest, woodychandler, for this beer. Poured from a 16.9 oz. can. Has a golden color with a 1/2 inch head. Smell is sweet, grapefruit is prevalent. Taste is very sweet, lots of grapefruit, more soda like than beer like. Feels medium bodied in the mouth and overall isn't bad, but one is plenty.

Bright and white and sort of pink orange frothing large head, with bubbly bathfoam like texture out of the can. Body color is a very odd mix of orange and pink lemonade like appearances, but caps a soapy thick top with some large dolloped crown. This is one really weird looking brew even for a radler.

Smells like grapefruit soda, quite a bit sweet as well. Beer qualities? Not really sensing anything.

First taste? Holly handgrenades what is this thing? Straight up flavors of Hubba Bubba and pink bubblegum. Extremely sweet with this sickly thick kool aid like texture. Sugar rushing penny candy, and not in a fun way. Mix of pils? Where?

Where's the beer in this? Tastes like a straight up sugared kids drink not even a radler, I was practically blowing bubbalicious drinking this thing. It's kind of gross honestly.

Look: Pours a lovely hazey yellow-orange, with a strong head that lasted nearly a minute before settling to a half-finger.
Smell: Very, VERY sweet grapefruit smell. Almost like a grapefruit candy, almost nothing else came through it.
Taste: The taste is a nice balance of sweet and tart, with only a hint of any kind of beer flavor. Not really what I was expecting, but considering the heat of the day it was actually quite nice.
Feel: The feel is a pleasantly mild carbonation, then a very smooth liquid on the back of the tongue.
Overall: Not what I expected, but a rather pleasant 'beer' that fits hot summer weather.

Hazy pale pink with about one finger of 5 minute white head. Some splotches of lace.
Smell is grapefruit.
Taste is like grapefruit Sprite.
Mouthfeel is light and fizzy. Finish is wet and lightly sweet.
Overall a light and refreshing warm weather beverage. No real beer qualities at all.

I was on a foray to the upper reaches of Maryland, just over the PA state line a couple of weekends ago when I came across this one. Yeah, it is another bottle, but I have to confess a weakness for grapefruit. Ah well.

From the bottle: "Special Edition"; "Some sediments may settle at the bottom and is a natural characteristic."

I inverted the bottle a few times before Pop!ping the cap just to get the lees back into suspension. An aggro pour produced two fingers of fluffy, foamy, slightly pinkish/off-white head with decent retention before falling to wisps. Color was a hazy Straw-Yellow (SRM = > 2, < 4), but with a slightly pinkish cast. Nose smelled really sugary, like grapefruit drink more than grapefruit juice. I keep a container of real grapefruit juice in my refrigerator at all times and I know what that smells like. This was not that. Mouthfeel was soft, medium, not as fizzy as some Radlers that I have tried in the past. The taste was much like the nose - sweet with a grapefruit-like character, but not really tart grapefruit as I would have preferred. Finish remained sweet to semi-sweet & towards the end, I gave it a shot of grapefruit juice to tarten things up. If this is simply "50% Warsteiner Premium German Pilsener and 50% Grapefruit flavored drink", I will buy some of the former and mix my own.

Today is T, 12 Mai 2020 & I am in deep isolation during the COVID-19 crisis, giving me ample time to clear out my backlog. This one will mark the embarkation of a few days of imports for The CANQuest (tm).

From the CAN: "1753"; "Special Edition"; "Warsteiner Grapefruit [is] A 50/50 blend of grapefruit flavored drink and Warsteiner Premium German Pilsener, lending itself to high drinkability and a refreshing taste. Nicely balanced with a mild hoppy taste and a clean finish, mixing crisp tartness with hints of sweetness."; "Some sediments may settle at the bottom and is a natural characteristic."

The last suggested that some in-CAN agitation was needed before Crack!ing open the vent. A heavy-handed, aggro C-Line Glug came next, creating a rolling fizzy finger of bone-white head that quickly fizzed its way out of existence. 8=( Color was a hazy Straw-Yellow (SRM = > 2, < 4). Nose had an imprecisely sweet grapefruit scent, like Ocean Spray Pink Grapefruit Drink, not full-on juice. 8=p Cutting CANers does NOT make it with me! Mouthfeel was thin, fizzy & generally watery. The taste was highly artificial! It was like drinking pop, which is something that I have really weaned myself off of, following years of drinking fizzy sugar waters. 8=p Finish was semi-dry & while it may have been refreshing, I could do better mixing my own using actual juice. YMMV.

Poured from a 12 OZ bottle into a pint glass. The appearance is a light golden yellow color with a small white head. The aroma is definitely grapefruit. I found this to be an average beer.

Based on the popularity of the Schöfferhofer Grapefruit Weizen, and my assumption that it was the first to market, I was expecting something similar from Warsteiner's version. Surprisingly, and pleasantly so, it's not the same at all. I found the Schöfferhofer quite raspy with lots of chalky/bitter citrus rind character to the grapefruit, but this is more like sweetened grapefruit juice. It's sweetish, but well-balanced and it is, in fact, "A 50/50 blend of grapefruit flavored drink and WARSTEINER Premium German Pilsener" so it's more of a "radler" than the Schöfferhofer which is a grapefruit-infused hefeweizen. With that said, the complexity of the Schöfferhofer isn't there, but it's a more readily accessible and easy drinking beer.

Not sure if the prior rater understands the radler. It’s half beer mixed with juice. Period. And this one’s pretty good, especially if you like pink grapefruit. Refreshing, and yes, aroma and taste of grapefruit. Perfect for a warm day or while partaking in some sort of outdoor activity.

33 cl bottle. Best before 07.02.12. It pours a grapefruitjucy goldish color. Smell is of grapefruit and malty sugar. The taste is like a sweet Grapfruit lemonade, some bits and pieces of Warsteiner linger in the background. No hops to accentuate the bitterness. Too sweet, if they ramped up the bitterness it might turn into something.