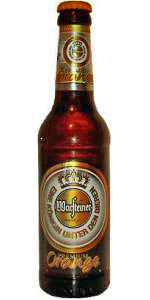 Notes:
View: Beers
Reviews: 6 | Ratings: 9 | Log in to view all ratings and sort

Well we have something here that I never thought I'd see. I can't believe this hasn't been retired yet. The "beer" is an artificial looking orange color like a transparent orange soda. Not very appealing to the beer lover. The taste is way too sweet, I think this is just a lightly alcoholic soda. Not very good at all.

This one was really just a novelty try...

The color is a very pale, clear orange, reminiscent of watered-down orange Kool-Aid. The head was incredibly weak to being with and took no time for what tiny layer of foam there was to disappear, leaving nothing behind. I didn't expect better, really, but definitely a bad sign to begin with.
The aroma is...orange. A bit of artificial tinge and perhaps (PERHAPS) some grains way, way back. Orange soda, really.
The taste is the same. It would be watered-down orange Kool-Aid if not for the carbonation. As it is, it's more an orange soda (or pop as they call it here in Ohio). However, just barely there, beaten down, is a little grains flavor and perhaps a light malt backing.
It's crisp with moderate to heavy carbonation and a light body.
There's no disputing that if you want an orange-flavored drink, this would be fine. It's not fine if you want a beer. Try a Lambic instead.

The aromas is orange with hints of crackers and herbal hops.

The taste is the same, like diluted orange soda pop with just hints of something like beer in the background.

Lighjt bodied (light everything), easy enough to drink and reasonably refreshing on a hot day.

I think I'd rather suck on a "Jolly Rancher" and drink real beer, but that's just my bias, this is like beer for kids, if that was legal.

(Review for novelty purposes only)

Smells is orangey, fruity and sweet.

Taste is sweet, like orange soda. A slight beeriness shows itself near the end.

Mouthfeel is decent, nice and carbonated.

Drinkability is good, if you want a beer that doesn't taste like beer.

Overall, better than the Lemon.

Flavor doesn't fare much better. Only a hint of beer is present, mostly drowned out by a sticky-sweet artificial orange taste. If you think that soda pop could be better mixed with skunky euro-lager, this is your beer.

I'd avoid this at all costs, even malternatives would be a lesser evil.

Not even refreshing, half the glass is a drain pour.

Warsteiner Premium Orange from Warsteiner Brauerei
Beer rating: 2.15 out of 5 with 9 ratings