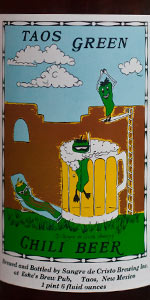 Multiple pints on tap at the brewery (reviewed from notes):

Potent roast green chile in the nose (reminds me of ortega, though it's likely hatch of course) - low base malt, no hops.

Complex flavor with mild heat, and faint char in the finish. Very clean and pure flavors - the base beer is just a delivery system for the amazing chile, but it contributes no off notes and just a touch of refreshment to bring you back continually for another sip.

Rated to style, this is among the best chile beers you can get - extraordinarily drinkable.

Came back several times for this one! Got a growler and 2 bottles to go, as well. It's addictive and refreshing. Not too spicy, it's more infused with bright chile flavor than anything with a nice malty hoppy base.

Probably one of the finest chili beers I've ever had. I don't know how Eske's get's the lingering head (nearly every chili beer I've encountered has virtually no head after the initial pour), but this beer would be notable if only for this characteristic. But the overall chili beer character is there -- bold and proud. A very, very delicious example of the style with the added bonus of an exceptional appearance. Actually better than the tap version I had the other month...

Giving this a high overall score because I found it very satisfying. Likely a pilsner, but as previously noted, perhaps a touch of wheat. Chilis OBVIOUS on the nose-this was very strong. Chili flavor was surprisingly restrained. I didn't drink more than a sampler size, but was really glad I tried it. Perhaps the best chili beer I have had.

Taste is chili: spice but not overbearing (and i don't generally like spicy foods). It's balanced by some wheatiness so enjoyable even for non spicy-food-lovers.

Mouthfeel is airy and foamy, keeps it from being too spicy.

It's pretty good, worth it even if you don't love chili and pretty drinkable. Would go well with milder Tex-Mex food (cheese, beans, etc.).

You have to order a glass of this at this brewpub as it is their signature beer. Now, this style is one that has been ruined by Eds Crazy Creek and chances are most people have only had the Rogue Chipotle as a good example. This is a pretty good chile beer using a lightish pale ale base with New Mexico Green Chiles. The beer is not too hot but once you get a quarter way down the glass you feel a slight burn. Drink with a mexican style entree from their kitchen and the beer works well and seems less hot. Couldn't really drink more than a glass of this beer but I did enjoy that glass

A friend brought this back from a road trip through New Mexico. His reaction upon tasting this for the second time some 50 days after the first was that this one "is a lot better than the Rogue chili beer." While this example is not another chipotle ale, I'd be inclined to agree, and would probably pronounce this my favorite chili beer so far. I've only had about four ales in that category, so I would hardly say I've had much which compares well with this one.

That being said, Taos Green Chili is a decent pale ale. Pours a hazy goldenrod with plenty of sediment. Another friend splitting the bottle with us compared the appearance to a duller hefeweizen. There is almost zero head, and limited (but pleasant) carbonation. Prior to warming up a bit, the heat and chili flavor are relatively mild. About 15-20 minutes later, the aroma, flavor and bite are quite pronounced. The nose is mostly chili-scented, with a mild hop aroma. The taste is initially mildly hoppy, with an abrupt transition into a peppery chili bitterness before ending with a reasonable burn in the finish. Mouthfeel is a mild disappointment, as it's a bit thin and watery. The heat builds and lingers more and more as one finishes a glass of this stuff. It's probably this feature which limits drinkability to a pint or two unless you're a fan of the fire.

All in all, I'd say this is mostly a novelty -- I wouldn't go far afield to sample this brew, but I would gladly quaff another if offered the chance, especially if I was about to enjoy some hearty fare. Mexican food may seem an obvious choice, but I'd prefer something a bit less zesty to compliment the assertiveness of this ale.

Had this on tap at Eske's. It was a nice golden color with not much head. It had a peppery and hops aroma with a little bit of malts. The flavor was really good. Just enough pepper to know it was there but mainly a pale ale flavor. A lot better than I was expecting. It had a light body with a nice crispness to it. Pretty drinkable and one that I could order if I go back.

A-Golden pale yellow with no head...oils from the peppers I assume keeps the formation of a head down.

S-Bready malts with a bit of sharp hop and peppery kick. Some herbal qualities in the background.

T-Nice breadiness starts it off and then the peppers, added in secondary, start to build and build...but they never reach a drink stopping level. The heat builds and then levels off allow you to enjoy the beer throughout a pint...or two, three.

D-One of the best all around chili beers I have had and unique in that it is in the form of a "light" beer. This one is actually drinkable in multiple pints. Most chili beers I have had use a darker malt base...like Rogue Chipotle. Very nicely done and went VERY well with our Nuevo Mexican food. If you have had Ed's Cave Creek Chili and now shy away from chili beers break your boycott and give this one a try.

Not a great fan of anything hot but was looking forward to trying this unusual beer style, well in the UK anyway. A challenging golden coloured pale ale with a strong taste of green peppers. Great if you like this type of beer. Suggest you drink it midway through a session and wash it down with the Seco Stout. ABV 4.5

I guess it's cause I'm a Chile-Head, but I really liked this beer. It had a fine American wheat base that was NOT overpowered by the green peppers added during secondary fermentation. It's the big green NuMex or Sandia chiles that makes it happen, not the harsh jalapenos. It's the style I've tried to make myself ever since trying it. Helps to have it at the the adobe brewpub's outdoor seating (picnic tables) on a fine late summer afternoon.
And yes, I realize this style just isn't for everyone. But if you got burned by a wretched Cave Creek, give this one a try!