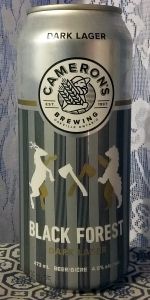 Review is from notes.

Appearance: Literally no head, which is a huge disappointment. The body is black with ruby notes that manages to hide any signs of carbonation, if it's even there.

Smell: Has the smell of mild toffee and a hunt of plum, but really that's it, and it's not particulairly potent, even after given a chance to warm up.

Taste: I noted that this beer had a double toffee hit, first when you first sip in, before it gives way to a more burnt malt experience at which point herbal hops and another toffee hit come around, making for a pleasant and interesting experience.

Mouthfeel: It's a bit flat, which given the lack of head is not a good, and thus points lost there. It has a mild toffee aftertaste though and transitions well, especially with that double toffee hit. Could have done a lot better had the carbonation made more of an appearance.

Drinkability: Medium bodied, which is kind of a shame, as I wish it was a bit heavier. The low carbonation at least means it settles down well, albeit in a somewhat sedate fashion.

Final Thoughts: I can only imagine what this beer would be with a bit more carbonation. The toffee would have an even larger presence, and made the beer a bit more aggressive as a whole. Instead this is a nuetered toffee malt experience which while tasting good, needs to get it's house in order.

I am beginning to think that Cameron's has not a clue as to how to make decent beer. It didn't help them that one of their truly bad beer won gold at a bad beer award show. I have tried several of their styles and it's just one fail after another.
And here is this disaster.
The initial pleasant nose turns into something not, that is only outmatched by the taste. Metal and dirt tastes vie for superiority, achieving none.
Another obvious downpour.

Red-hued walnut, like a cola. Moderate head, steady lace. Sweet, nutty chocolately on the nose and to taste. Noticeable caramel from malts. Thin bodied, short-lived on the palate, just a little bitterness to finish.

473 mL can included in their latest Brewmaster's Selection mixed four-pack - now with tallboys instead of standard longnecks. Dated Nov 14 2016 and served slightly chilled. Looks like their old Dark 266 recipe has gone the way of the dodo - unless this is simply a tweaked version of it.

Pours a deep, clear copper-chestnut colour, generously capped off by two fingers of puffy, pillowy, light beige-tinged foam. Excellent retention - it lasts to the five minute mark and beyond, seeping away at a near-infinitesimal pace whilst caking the glass with a messy pattern of foamy lacing. A smooth cap and collar are the final remnants; very attractive visually, but the nose is quite subtle and straightforward. I'm getting some notes of brown sugar or toffee, alongside some toasted bread, milk chocolate almonds and faint suggestions of vanilla and lager yeast.

Good, approachable flavour profile that is primarily dominated by dark malts, which supply notes of caramel and toasted bread sweetness. Hints of milk chocolate mid-sip, as well as touches of roasted grains and maybe some light undertones of coffee. Finishes bittersweet, with some earthy, spicy hops that soon fade, once more abandoning the palate to the lingering dark malt sweetness - fortunately, it swiftly attenuates in the aftertaste, leaving only trace amounts of residual sugars. Relatively light in body, but with a smooth, almost creamy texture on the palate, surely a result of the low carbonation levels. A very nice dark lager - feels very smooth on the palate, and it's exceptionally sessionable and easy-drinking.

Final Grade: 3.97, a solid B+. Cameron's Black Forest Dark Lager is not a particularly complex rendition of the style, but I'm still having trouble coming up with stuff to criticise. Indeed, this is a simple beer that can be dumped down the hatch with minimal effort, and is unlikely to offend or turn off many beer geeks. I expect that fans of their (now-retired) Dark 266 label will likely appreciate this one, given that there's more than a little overlap in terms of flavour profile - but anyone with a soft spot for dark lagers can consider this a safe, worthwhile selection.