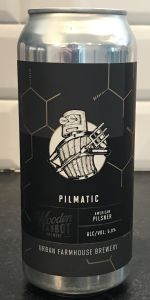 Notes: This Pilsner is brewed with Epiphany Craft Malt and our house lagering yeast. Drink this brew with your favorite foods or just sit back and enjoy an easy, drinking lager.
View: More Beers | Place Reviews
Recent ratings and reviews.

Rated by Rub_This_BBQ from Massachusetts

3.98/5  rDev -2%
look: 4.25 | smell: 3.75 | taste: 4 | feel: 3.75 | overall: 4.25
A: Pours a crystal clear pale yellow in color with moderate to heavy amounts of fine active visible carbonation rising quickly from the bottom of the glass and faint pale golden yellow + medium yellow colored highlights. The beer has a two finger tall sudsy foamy bright white head that slowly reduces to a large patch of very slightly mottled thin film covering the entire surface of the beer and a thin ring at the edges of the glass. Light to moderate amounts of lacing are observed.

T: Upfront there are moderate flavors of bready + biscuit malts with minimal amounts of sweetness. That is followed by light flavors of grassy + earthy + herbal hops which impart a slightly heavier than light amounts of lingering bitterness.

O: Easy to drink with well hidden alcohol and a nice crisp + clean mouthfeel. Nice mostly traditional malt and hop flavors. Very refreshing, I could easily have a couple of these (especially after running a half marathon this afternoon).