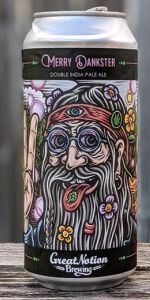 Notes: Merry Dankster is our tribute to Ken Kesey and his merry band of Pranksters. At 8.2%, this DIPA is heavily dosed with a variety of dank hops and fermented with wild flower honey. If you have the choice... “Get on the Bus!"
View: Beers | Place Reviews
Reviews: 3 | Ratings: 14 | Log in to view all ratings and sort

Umm, well, if you’ve never seen a picture of this can, envision a dirty hippie with his tongue out. And it smells and tastes exactly like that too. Wow. One whiff of this thing and it smelled like my neighbor’s compost heap that just had a fresh splash of human waste put into it. No sir! This one is more foul than Altuve knowing a fastball is coming and getting out in front of it. Seriously. This is a drain pour.

Sweet orange/tangerine hoppy aromatics on this one. The taste follows with a honey vibe along with the citrus bitterness.
It has good depth feels nice on palate.

Pours two fingers of fluffy white head into my willi becher. Soon turns soapy around the edges. Head retention would be above average, but considering the nucleative glass, it’s only slightly above the norm. Initial lacing looks a little soapy, but maybe it will be alright. Body is orange juice as usual. Looks ok so far.

Nose is a little dank, heavy citrus notes, tangy, pretty heavy floral, maybe even some chamomile notes. Give credit where credit is due, this is actually noticeably different than most hazy aroma’s, which is one of my biggest complaints, the lack of diversity. Smells good, a little bit of an abrasive combination of smells, but good.

Flavor is definitely juicier - orange, light tangerine, not as heavy on the citrus though. Dankness is there but is moderate, floral notes are noticeable as well. Flavor is not quite as big as the nose, but it’s certainly serviceable. Works pretty well all together, might drink a little too much like juice, but whatever.

The mouthfeel is again an issue though. As with the last GN beer I had, the carbonation is staggeringly low. Less of an issue here because the bitterness is somewhat low, it’s pretty smooth, and overall passes as juice (which I don’t love on principle, and somewhat on enjoyability, but it’s alright). Still, carbonation should really never be this absent. Body is overall pretty damn light. A little sweet for my taste, but not the end of the world. Overall could use some work for sure.

Drinkability is very high for a 8% beer, hides that well.

Appearance turned out pretty good. Lacing is thick, albeit soapy.

Overall a good hazy. Certainly rough around the edges with the carbonation, juice like feel, and questionable levels of sugar. But all in all it’s enjoyable.

Merry Dankster from Great Notion Brewing
Beer rating: 90 out of 100 with 14 ratings